Has Gap finally turned its business around? 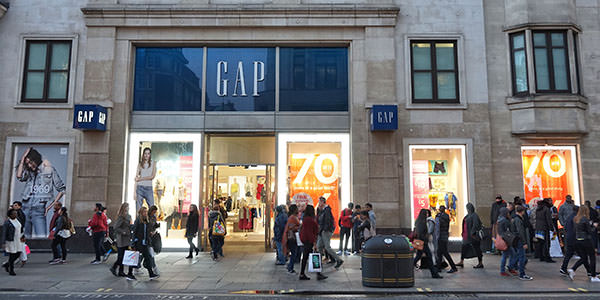 Looking at the latest quarterly results — a two percent gain in overall sales — you would be hard pressed to conclude that Gap Inc. is on a roll. But Gap CEO Art Peck believes the recent gains plus trends favoring his company will add up to more positive results going forward.

Speaking on yesterday’s earnings call, Mr. Peck, who is his second year as CEO, said he and his team “underestimated the magnitude and speed of the changes taking place” in the apparel market. Despite that, Mr. Peck also said he was “pleased” with Gap’s progress in a market that has gone through “significant disruption.”

As to the numbers, Gap’s fourth quarter positive sales performance compared to a seven percent decline last year. For the year, the company saw its same-store sales decline two percent compared to a four percent drop in 2015.

Old Navy remained the strongest performer among Gap chains. The company’s comps improved one percent compared to flat in 2015. The chain gained market share in categories including denim, dresses and knits.

The Gap chain’s comp sales declined three percent in 2016, up from minus six percent the year before.

Banana Republic’s comps, while also still negative, showed some improvement year-over-year. The chain’s 2016 final tally was down seven percent compared to negative 10 in 2015.

Mr. Peck said that the disruption taking place in the market should work to Gap’s favor. The company’s “structural advantages” in terms of size and scale along with improvements it has made on “product and experience” present the company with “a significant opportunity to consolidate and gain market share.”

He pointed to progress the company has made in the supply chain by cutting development cycles for many categories of products from 10 months to eight to 10 weeks. “Time,” Mr. Peck said, “is the enemy in this business.”

Mr. Peck said the company is converting its retail distribution centers to handle consumer direct fulfillment, as well. He said the retail DCs “are not fully utilized” making it possible to bring both functions under one roof without having to invest in added space.

DISCUSSION QUESTIONS: What do you see as positives working in Gap Inc.’s favor going forward? What are the challenges facing the company?

Please practice The RetailWire Golden Rule when submitting your comments.
Braintrust
"At some point, the company will be right-sized, and then it can move forward. Not yet."

"Gap is lucky to have the experienced Mr. Peck at the helm for this bumpy ride."

"Great to see that Gap is moving out of negative comps, but they still have a long way to go to get back to their glory days..."

9 Comments on "Has Gap finally turned its business around?"

To a great extent Gap achieved market prominence by tapping into a fashion sensibility that resonated with consumers. But like all fashion, it’s cyclical and fickle. After years of years of declining results, it appears that Peck and his team are making prudent business decisions to improve supply chain and optimizing costs, but they have a long way to go and the future remains very uncertain. Business processes can be refined and results may continue to modestly improve, but recapturing the hearts and minds of consumers the way they did when they were a certifiable retailing juggernaut is much more difficult and far less likely.

A slowing in annual comparable sales declines is not a positive. Even a large single digit increase against such short numbers would be a bit suspect.

Gap will achieve some kind of stasis when its store count finally gets small enough to match its market (which is significantly smaller than it used to be). Its styling seems to have gone back to its roots, which is a plus. At some point, the company will be right-sized, and then it can move forward. Not yet.

The changes in the apparel segment are swift and alarming. Those “everything must go” signs on BCBG Max Azria stores, not to mention the demise of The Limited and the rise of TJMaxx and Marshalls, tell the story. Gap is lucky to have the experienced Mr. Peck at the helm for this bumpy ride.

Gap has been taking a number of positive steps, but is still far away from regaining the relevance it once had. It’s cut development cycles, but does not have products that resonate with consumers. It has an omnichannel policy, but still has different prices online vs. in-store. There are opportunities for Gap to continue to grow. The question is whether the company will run out of good will with consumers while they are turning things around.

One quarter doesn’t make a trend, but the 2 percent gain compares favorably to most of Gap’s competitors. In terms of merchandise content, there seems to be a renewed focus on what I would call “core basics,” which is what brought such success to Gap during the ’90s. Without ignoring the lessons of fast fashion retailers (especially in terms of speed to market and supply chain management), Gap will probably continue to gain traction if it takes a more classic approach to the business.

The fashion world has changed, evolved, adapted and clearly tastes have shifted from the time that the Gap, Banana Republic and other prominent mall-based brands were the key players in the retail game. Key to the Gap’s success was its accessibility, marketing back in the 1990s and simplicity. Every teenager felt a part of the Gap community, and their brand was literally everywhere, with the right blend of price, quality and fashion sense.

However, despite all the moves employed by Peck to improve their supply chain, infrastructure, speed to market, etc., the challenges that Gap and other mall-based retailers face are more significant. Fashion tastes and trends have evolved, particularly led by H&M, Zara and Forever 21’s speed to market, accessibility, agility, affordable pricing structure and the overall onset of the socially connected, fast fashion, runway to brick-and-mortar strategies, have changed retail to a completely different world than the one Gap once dominated.

Let’s see how this plays out.

Great to see that Gap is moving out of negative comps, but they still have a long way to go to get back to their Glory Days … not to mention give Zara, H&M, TJX and Ross serious competition.

The positives for Gap are the closure of several of its rivals and the blind squirrel theory (eventually it will stumble upon a great idea or exec just by chance). The challenges are everything else.

Gap is, by now, one of those legacy brands whose glory days were years and years ago and has struggled along in Nowheresville since. I think it’s about time they either find their epiphany or become the target for a takeover attempt (though I personally doubt such an attempt would accomplish much).

Fashion has changed, and is continuing to change at a fast pace. While this is certainly a step in the right direction, it looks like it’s just that — a step. Gap has still has a long road ahead to return to great success. And it still seems Old Navy is the one bright star in its portfolio. Gap and Banana Republic continue to struggle to identify with their core customer. There’s still work to be done….

Braintrust
"At some point, the company will be right-sized, and then it can move forward. Not yet."

"Gap is lucky to have the experienced Mr. Peck at the helm for this bumpy ride."

"Great to see that Gap is moving out of negative comps, but they still have a long way to go to get back to their glory days..."