Has TikTok become the most direct marketing path to Gen Z? 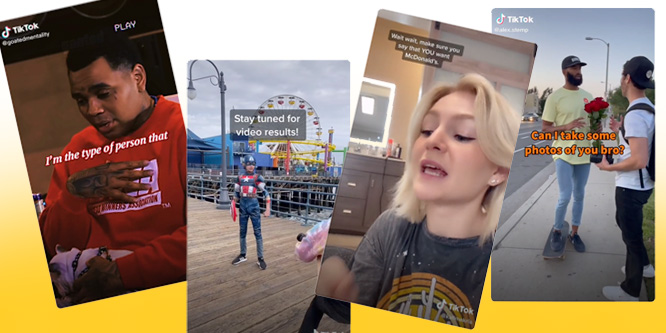 In 2019, a number of articles speculated whether the TikTok phenomenon would wind up being a fad. A number of reports in recent months, however, point to the video app becoming a primary tool to reach younger consumers.

In May, eMarketer predicted TikTok will surpass Instagram in total Gen Z users in the U.S. by the end of 2021 and Snapchat by 2023.

“TikTok has incredibly strong engagement and loyalty among Gen Z,” said Debra Aho Williamson, eMarketer principal analyst at Insider Intelligence, in a statement. “The members of this generation are using it not only to be entertained, but also increasingly to learn about and discuss weightier issues such as climate change, politics and news. Other social platforms also offer such content, but TikTok’s unique video style and aesthetic is strongly appealing to young people.”

A recently released survey from IRI of women between the ages of 17 to 23 in the U.S. found 39 percent learning about new products through TikTok videos, only behind friends and family as a primary source.

IRI wrote in the report, “Throughout the dozens of conversations we had with Gen Zs, TikTok was commonly mentioned as the first place that new products are often noticed. The appeal of TikTok is highly aligned with Gen Z’s overall desire for less ‘manufactured’ engagement and more ‘real people’ organic content.”

DISCUSSION QUESTIONS: Is TikTok moving past Instagram, Snapchat, YouTube and other social platforms as the tool for engagement and shopping discovery with younger consumers? What’s driving its appeal and how do retailers and brands use the platform to connect with Gen Zers?

"TikTok is purely a medium. And only one of many. Companies MUST keep their focus on figuring out where their customers can best be reached in ways which lead to sales."

"Want to know when TikTok has jumped the shark? You’ll know when the RetailWire community is using it daily."

11 Comments on "Has TikTok become the most direct marketing path to Gen Z?"

Younger consumers spend an incredible amount of time on TikTok and that alone makes it an excellent channel for reaching them. However they are not there to be sold or marketed to; they are there to be entertained and engaged. All brands need to keep this in mind as simply placing traditional advertisements on TikTok can be extremely jarring. Using influencers to promote product in an authentic way, doing something quirky that fits in with the vibe, or dropping product that is relevant to the audience are all better approaches.

TikTok is a social media phenomenon that has rewritten the rules of engagement with Millennial and Gen Z consumers. The viral and creative power of TikTok and the fact that their mostly Gen Z audience engages with the app has positioned this platform well beyond Instagram, Snapchat, YouTube and other social media sites.

With that unlimited potential, retailers and brands should tread carefully with traditional direct digital advertising and marketing campaigns. While Instagram has evolved into a heavy monetization platform, with both brands and influencers running sponsored posts, what makes TikTok unique is that independent creators are producing outstanding and original content.

TikTok is still in a place where posts could go viral unintentionally and unplanned. Some creators have leveraged this platform to elevate their careers, i.e., Bella Poarch, Addison Rae, and others with millions of followers. Just as the case was with Instagram, once things scale beyond the individual creators and become too commercialized, the Gen Z group will navigate to the next app.

I remember we discussed TikTok when it came into existence and almost all concluded that this was the next communication vehicle for Gen Z members, but it has also become a tool for other groups from Gen X to Baby Boomers. Messages are simple, short and to the point. I don’t see the trend slowing down until the next TikTok is introduced.

TikTok is huge now, but it’s the nature of social media to come into favor, then fade. Remember MySpace? Within two or three years, watch for something new to eclipse TikTok. Time for me to check on my fellow geezers on Facebook.

TikTok is definitely here to stay. Beyond the fact that it’s equipped with a suite of features that allow for peak creativity, the suggestive algorithm is superior to other social media platforms. The technology at the core of its recommended content means it delivers a level of personalization that is prime for brands to make authentic entrances. Several beauty brands have already figured out how to leverage TikTok’s setup in masterful ways, so it’s just a matter of working with the algorithm and only giving users exactly what they want to see.

Considering the apps that came before TikTok, it’s kind of amazing that they have grabbed the market share that they have. I wouldn’t have thought the void or the opportunity was that big. But then again I thought the same thing about Zoom and the apps that preceded it. That officially makes me a Boomer I guess. The appetite for new and fun and quirky avenues of communication is enormous. So while I make no long-term predictions for TikTok, they will certainly enjoy a robust couple of years at a minimum.

Sigh. Here we are again. Another interesting new bit of media suddenly turned into “the only way to get to young consumers.” First, there is NEVER a best way or only one way. The question always must be how do YOU reach your customers in a way in which you make things happen? Perhaps we all missed the new research showing that traditional TV still makes up over 60 percent of TV viewing in the U.S. (streaming is around 24 percent). Perhaps we forget that gas station pumps or airplane seat backs all had their time as “the best” and never delivered. Second, I only see TikTok-claimed videos on Facebook or Twitter. Um. So what is TikTok really? A format? A platform? A … ? Finally, what kinds of products can be successfully promoted through TikTok? Not many. Fashion I suppose and then only sometimes. Kitchen gadgetry? Maybe. New cell phones? Doubt it. TikTok is purely a medium. And only one of many. Companies MUST keep their focus on figuring out where their customers can… Read more »
1
|
0
-   Share

I’m waiting for GSTV+, as Colbert predicted would be where Conan O’Brien has his next big show in the 2030s….

Good call! There’s a big distinction in TikTok being a toy for young customers and a tool for marketers. And gas station pumps had a moment…? I missed that one.

No question TikTok is on an upswing among the young, but then again — once upon a time — so were MySpace, Facebook, Snapchat, and YouTube. What’s driving its appeal? Two things. It’s visually oriented and the fact that kids’ parents and grandparents aren’t on it … yet. Want to know when TikTok has jumped the shark? You’ll know when the RetailWire community is using it daily.

"TikTok is purely a medium. And only one of many. Companies MUST keep their focus on figuring out where their customers can best be reached in ways which lead to sales."

"Want to know when TikTok has jumped the shark? You’ll know when the RetailWire community is using it daily."