How can the retail job market survive the AI revolution? 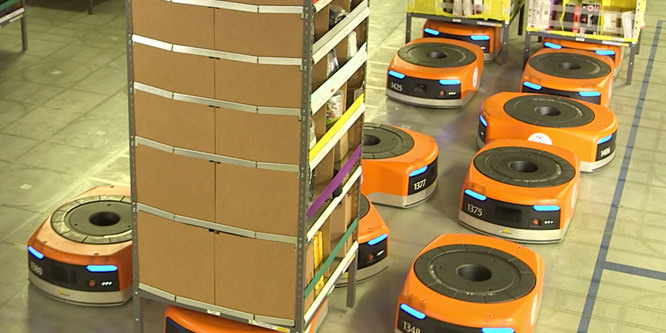 The White House has released a report detailing the negative economic impact artificial intelligence (AI) could have on millions on jobs.

“At a minimum, some occupations such as drivers and cashiers are likely to face displacement from or restructuring of their current jobs, leading millions of Americans to experience economic hardship in the short-run absent new policies,” the report stated.

It is hard to ignore the speed with which AI — broadly defined — has arrived on the retail scene, both in stores and in industries adjacent to them. Macy’s, for instance, has begun piloting Watson-based AI for answering in-store questions about inventory via a mobile device. Other brands and retailers have piloted enhanced AI-based website searches and voice-controlled searches. Self-driving vehicles have appeared on the roads in tests that could change both local and cross-country shipping and logistics. And, of course, Amazon is testing a convenience store that requires no in-house staff to operate.

Which of the AI experiments will end up as technological footnotes and which will become central to the retailing experience remains to be seen. It is also impossible to fully gauge the timeline along which AI will move from being used occasionally to replacing a significant number of jobs. But whether it takes decades or just a couple of years, the end result could see — in a worst-case scenario — a huge chunk of the population being rendered unemployable. And that could lead to devastating ramifications for consumer spending and the economy as a whole.

The White House report called for aggressive policy responses if the rate of job disruption were to go beyond what has been observed in previous eras of technological disruption. Some of the potential responses mentioned were new job creation strategies, job training to meet the new technological landscape and a stronger social safety net.

DISCUSSION QUESTIONS: How should retailers prepare for, and respond to, the changes that mass AI adoption may bring to the retail job landscape? How immediate will meaningful changes be to the employment landscape because of AI?

Please practice The RetailWire Golden Rule when submitting your comments.
Braintrust
"Ultimately, this is not a retail issue but a societal one."

"Just like I haven’t seen a lot of impact from data mining, I’m not sure we’ll see the wholesale replacement of jobs by AI."

"I’ve also been thinking about this question a lot and my theory is that it’s going to change the TYPE of jobs and the profile of the associates."

16 Comments on "How can the retail job market survive the AI revolution?"

Retail is like any other business: efficiency and cost cutting are always paramount to survival. So despite the sociological implications and impetus for “doing the right thing” merchants will undoubtedly embrace AI for its virtues at the expense of employees.

Ultimately, this is not a retail issue but a societal one. I’ve butted heads with other pundits over the impact that automation including AI will have on the workforce. They often state that workers will be retrained as “robot repairmen,” but evaluating the realities of those statements shows their weaknesses. Simply, the White House has this right, there is a serious job loss issue coming in the next couple of decades that all industries will take part in. Retailers will bear their responsibility to contributing to it like every other industry, but, without a very earnest and effective retraining/restructuring effort society-wide, retail is likely to suffer most from displaced workers’ reduced consumption.

For the immediate future, AI is probably going to make a bigger impact on improving our efficiency levels than replacing front-line jobs.

To prepare, retailers need to think about where AI could make the biggest impact and where it is frivolous. Remember that some AI will just make you a more efficient retailer. Some examples are artificial intelligence in your order management (order routing) system and demand forecasting/supply chain planning systems. These will make retailers better at what they do, help them route more cost effectively, manage inventory levels and more accurately forecast — to reduce excess stock.

In some situations (like that above), it might mean that you will have more of your staff available to service customers in the field — to improve customer satisfaction.

I’m not sure I’m quite buying into this one yet. Just like I haven’t seen a lot of impact from data mining, I’m not sure we’ll see the wholesale replacement of jobs by AI. Assisting workers maybe. Replacing them? Nothing creeps me out more than a robo-call or a robo-answer-bot on a website.

Retailers should closely follow and analyze the potential impact that AI could have on their businesses. Amazon’s Go and Echo technologies are leading indicators that the retail industry is facing major change, and retailers should be considering and planning for how their businesses will be affected and how they can adopt new technology and capabilities as well.

Similarly, retail employees will be affected by AI technology, with some jobs disappearing and others being created. Workers should understand the impact of the new technology and keep their skills current and relevant as the industry evolves.

If $15 hour minimum becomes reality this will accelerate the AI scenario, as small businesses simply can not survive without technology taking over certain tasks. In a perfect world, we would be able to absorb more mandates such as $15 hour minimums, paid sick leave, paid maternal leave for both father and mother and free paid health care by the employer and still manage to have a healthy bottom line. The reality is, any one of these new mandates will simply kill off more small businesses and the big box retailers, along with giant e-commerce sites, will survive long enough to grow their businesses even more as we go under. Some here may disagree, but until you have to make a payroll in this current environment and are facing huge additional expenses with almost zero growth, it doesn’t look good for small business. Technology will help for sure and, unfortunately, more workers will simply not find the starting jobs needed to improve their skills, which puts a burden on unemployment rolls. Any thoughts? As I… Read more »
3
|
-1
-   Share

One perspective on this (particularly for all of us on this forum who have made a career of retail). What retail job would you advise your school-age children to prepare for in the future? A sobering thought.

AI has been here before and has not really taken hold, but I am getting the feeling that third time is the charm and it will have a big impact on many jobs — just not next year.

OMG, look at all the scribes the printing press just put out of work! OMG, look at all the auto workers the robots just put out of work! We seem to figure these things out over time. That’s not to say the process isn’t painful. It is. It seems a little cold to say that we always have and always will worship at the alter of efficiency — time and money. But it’s a simple truth of life. Happily, there will also be a role for “hand made” and “home made.” Artisans will always be appreciated. So I would ask the question slightly differently. How can the retail job market evolve within the AI revolution?

I’ve also been thinking about this question a lot and my theory is that it’s going to change the TYPE of jobs and the profile of the associates. Look at Amazon Go. Yes, the functional stuff is automated — but the human touches and the customer service is still very prevalent. They are just providing a different type of service, operating more as high-touch handlers and experts on specific topics or needs.

People come to stores because they want to interact with other people. They want help or guidance. They want it to be GOOD. They want to enjoy the entire process. AI and robots will never replace this. So the question to ask is, what can you dial up from an experience perspective to make your store better and more beloved once the rudimentary stuff is automated? And how can new funds propel this?

The operative words in this article are: piloting, tests, experiments and potential. Nowhere are the words: successful scaled deployment. While it’s fun to play with skunkworks projects that get a lot of attention and press, it’s quite another to deploy them across thousands of stores.

AI will play a role in back-of-the-house functions for sure, but the front of the house will continue to demand human interaction because customers will demand it.

AI is just another element of the vortex of change in the retail marketplace. Like others, it is understanding how to use it differently that adds value to the customer’s experience and enables profitability for the company. This type of innovation will continue to be a challenge … especially for the independent retailer.

AI at retail is heavy on promise, light on delivery. Ultimately, retailers will be faced with a mix of consumer segments that desire the most expedited service possible along with segments that desire high touch/high support. Those segments are less category-specific than you would think. High-touch customers tend to be high-touch customers across categories and even channels.

The most immediate opportunity and the largest savings for retailers will be the use of AI in the supply chain — making sure that the right product is delivered to the right store at the right time, combining dynamic forecasting of sales with an optimization model for inventory. The in-store component is more complex than it looks and is a bit farther off.

Yes, AI is helping evolve the retail landscape, however, there are very low-tech innovations that are currently being implemented that are displacing human workers as we speak. Hand-held self-checkout, menu ordering kiosks, etc. are just the beginning. As other costs continue to rise, including the U.S. minimum wage requirement, retailers need to take action to maintain viable margins to stay profitable.

Not to be (too) argumentative here, but I think one can very well ignore “the speed with which AI has arrived”… namely it hasn’t really arrived very much at all. Just a few well-hyped baby steps.

The reality is, we don’t know which components of AI will catch on or when, so it’s impossible to say how retailers should prepare for it. But we know how they WILL adapt to it, incrementally, as they become commercially available and when they make sense for each business/industry — the same way business has been adapting to innovation for the past two centuries.

I’m with Ken Lonyai. It is more of a societal problem than a retail problem. As with developments such as mobile, IOT, big data analysis, this is going to come on us quickly, and requires some very creative thinking — now — of how to train and prepare workers for whole new roles in our “brave new world.”

As with any new disruptive innovation, in any market, the market will respond in other ways. For instance, retailers that utilize the positive impact of AI should consider how to redeploy or refine their customer experience strategies. If anything, using this type of technology for optimization opportunities should push brands into greater focus on customer facing opportunities that directly affect the brand. Look at this as an opportunity to enhance your business, not a threat.

Braintrust
"Ultimately, this is not a retail issue but a societal one."

"Just like I haven’t seen a lot of impact from data mining, I’m not sure we’ll see the wholesale replacement of jobs by AI."

"I’ve also been thinking about this question a lot and my theory is that it’s going to change the TYPE of jobs and the profile of the associates."