How long will it be before robots replace humans in restaurants? 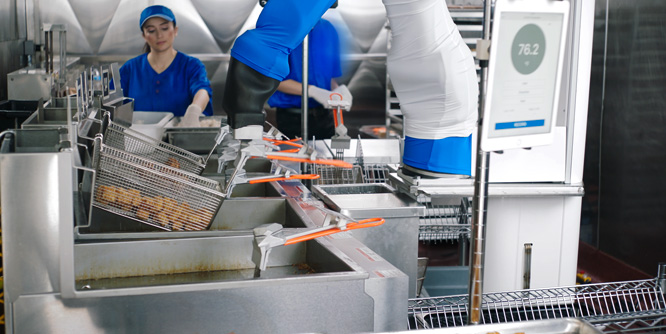 Visitors to mom-and-pop restaurant Mala HotPot won’t have to worry about their waiter having a mask or not; the Central Ohio restaurant’s new server is a robot.

Mala HotPot’s has deployed a $13,000 table service robot in the interest of limiting human-to-human contact for visitors, according to This Week. Visitors to the restaurant can download a digital menu onto their smartphones or tablets to place orders directly with the bar or kitchen. As Mala’s is a cook-at-the-table restaurant, the kitchen staff receives the orders and stages prepared vegetables, meat and tofu on the robot’s shelves. The robot retrieves the items and seeks out the correct table automatically. Diners accept their ingredients and cook them on small in-table burners. Only stock for cooking the hotpots, because it is kept at a high temperature, is delivered to tables by human staff.

The foodservice space has seen a great deal of development in the way of digital automation in recent years, both robotic and otherwise.

Back in 2016, burger chain Caliburger began implementing robotic burger chef Flippy in some of its restaurants and has expanded the use of the robot since then.

Just this winter, an upgraded version of Flippy capable of cooking and preparing 19 foods came to market with a $30,000 price tag, according to SingularityHub.

Other startups have rolled out customer-facing, Rube Goldberg-type robotic assembly lines capable of building burgers without a human chef and touch screen-driven, next-gen vending machines for putting together complex coffee and salad orders without human involvement.

The dining area of restaurants had likewise experienced some digital transformation in the years preceding the pandemic. McDonald’s, Panera Bread and others have implemented touch-screen ordering kiosks at their locations.

Digital transformation in foodservice, as in retail, has not been without its critics. Some have pointed to the potential for robots and AI to replace laborers at scale, meaning cost savings for businesses but potential joblessness for many low-wage workers.

A 2016 report by the Obama Administration warned that 62 percent of low-wage workers could find their jobs threatened by robotic replacement, according to Business Insider.

DISCUSSION QUESTIONS: Do you see using robots for table service in restaurants as a use case that will succeed? Where do you expect to see restaurants making their automation and robotics investments in the coming years?

Please practice The RetailWire Golden Rule when submitting your comments.
Braintrust
"Most of the automation and robotics investments will occur in the kitchen and back rooms with those tasks that are very repetitive and can be standardized."

"Let’s hope there are some industries where people are better equipped than robots."

"...one of the primary things guests value when dining out is the personable interaction with the server."

17 Comments on "How long will it be before robots replace humans in restaurants?"

I don’t see robots replacing human servers at table service restaurants for quite some time. There are unique challenges, such as knowing which person ordered what dish, reaching into a booth or navigating around people to place the food. Another reason robots aren’t a reasonable substitute for humans servers is that one of the primary things guests value when dining out is the personable interaction with the server.

I couldn’t agree more! I rarely dine out (even prior to COVID-19) and one of the pleasures I look forward to is interacting with my server. I want the “personal” touch, and that cannot be achieved by a robot.

Robots in a restaurant are a novelty at best. But there are a number of other innovations that already minimize interactions. Order taking tablets/swipe machines at Olive Garden have reduced the time that a waiter spends to a fraction. Self-service kiosks at McDonald’s work really well.

It is inevitable that fast food and fast-casual restaurants will move to a higher level of self-service throughout the entire experience. For the higher-end restaurants, the differentiator will continue to be personal service, not least because the staff relies on tips and self-service means less opportunity for getting tips.

I might even take this one step further. Why not use a video chat on the tablet to make it more personal? In a new place, I always like to ask my server questions about dishes and what is popular. Let’s not lose all the personal touches, just lose the actual touch. For my 2 cents.

No thanks. I like the interaction with human servers. And I don’t think I am the only one.

Every year at the NRF show, there are a bunch of robots being touted as the next thing in customer service. They never pan out. This looks like a solution in search of a problem to me.

Every year, there is talk of increasing the minimum wage to some arbitrary figure. There comes a point when that arbitrary figure becomes so high that the ROI will actually make sense to deploy these robots in some form. I don’t think “food server” is the right position to transfer to a robot. Maybe some of the food prep/food assembly tasks … or some cleaning tasks….

The minimum wage is so absurdly low that I doubt that it’s going to result in robot deployment….

Not yet. It is still cheaper to pay an employee than pay for the robot. But at some point with the arbitrary wage increases that are being discussed, that will change. It is similar to the electronic car vs. gas car thing from a cost perspective. Electronic cars are a lot more attractive economically, when gas is $5/gallon, than when gas is $3/gallon.

Similar to how if you go to Asia you will see far higher staffing levels and far more disciplined staff in mall stores there than in the US. It is because the labor cost there is lower and the labor pool is very disciplined and takes these retail sales jobs very seriously. So they can afford more staff.

There will be limited application in using robots for table service. Walmart spent five years trying to use robots for shelf inventory and shuttered the effort recently. The same thing will happen in restaurants. Part of the dining experience is the personal interaction with the waitstaff. Most of the automation and robotics investments will occur in the kitchen and back rooms with those tasks that are very repetitive and can be standardized.

The Walmart experiment failed because the shelves are a cluttered mess and it kept tripping up the robot. You need a human to straighten the shelves so the robot can accurately take inventory.

The robotic floor cleaner remains in use at Walmart.

As I [virtually] fuel my daily risk of “making friends” on RetailWire, I’ll state that if you raise labor costs (the highest controllable cost beyond the ingredient costs) some 50% to the oft-suggested $15 minimum wage, do you REALLY expect the Moms ‘n Pops to simply eat that cost without seeking long-term remedies? Everyone wants to do the right thing, however, this is all about the costs of doing business. So, surprise, surprise, expensive staff will continue to be replaced by automation under the guise (now) of contactless delivery.

I would think it’s largely dependent on the type of service offered. Quick serve operations — that don’t really have “table service” in the normal sense of the word anyway, so this might actually be an upgrade — could use them for order taking or delivery, but I don’t see a Michelin starred establishment making much use of them.

Honestly the whole thing is a little too “Jetson’s” for me to rap my head around. I’m hoping the answer to the titular question is, “after I’m gone” … and I’m OK with that!

People still like the personal touch when dealing with something personal like food in a restaurant. On a personal note, I would boycott any restaurant that had robot servers.

I too would boycott.

Braintrust
"Most of the automation and robotics investments will occur in the kitchen and back rooms with those tasks that are very repetitive and can be standardized."

"Let’s hope there are some industries where people are better equipped than robots."

"...one of the primary things guests value when dining out is the personable interaction with the server."