Can baristas keep up with their robotic challengers? 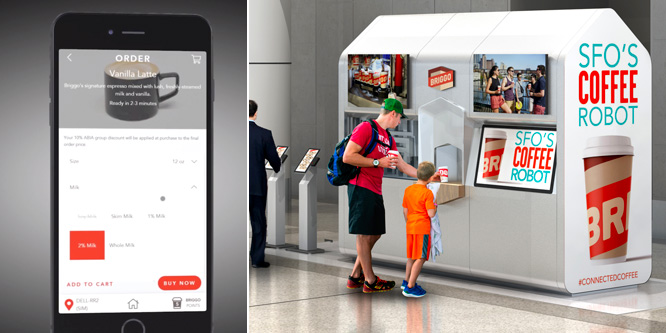 Robots that can prepare food have become a perennial part of the discussion of the future of the quick service customer experience — and the employment landscape, as well. Now a gourmet coffee robot has arrived that could shake up the barista business.

The robot is called a “coffee haus” and was created by tech startup Briggo, The Washington Post reports. Customers can use an app to not only place their orders with the robot, choosing aspects of their order such as ingredients, espresso shots, flavorings and temperature. The machine can produce 100 cups of “specialty” coffee in a single hour, three to four times faster than a human barista.

Briggo currently owns eight 10-foot by four-foot machines and is beginning to develop a licensing agreement for interested store operators. Briggo was named one of the 10 most innovative companies in the world by Fast Company in 2018.

Besides Briggo, there are at least a half dozen prominent startups experimenting in the space, as detailed in a list on tech blog Nanalyze. Robotics companies in San Francisco, Australia, Russia and Japan have all been pursuing their own distinct take on the robotic barista.

Robots have already begun to pop up in other foodservice verticals. In 2016, a startup called Miso Robotics rolled out a burger-cooking robot called Flippy. Regional burger chain Caliburger announced plans to implement Flippy in 10 of its 50 locations by the end of 2018. Another Bay Area startup called Creator launched a conveyor belt-driven burger robot capable of quickly turning out a gourmet burger to order with a $6 price tag.

As with the potential full automation of burger joints, the creation of a totally automated coffee maker could drastically reduce or eliminate staff required in a shop.

And coffee aficionados have already demonstrated that they’re comfortable ordering by app. Last year the Starbucks app topped the list of most used mobile apps, Geekwire reported. The data, collected by eMarketer, indicated that the Starbucks app has even more active users than Apple Pay.

DISCUSSION QUESTIONS: Are baristas’ jobs on the line with the advent of gourmet coffee robots? Should coffee shops begin to move toward robotic tech or compete against the robotic coffee experience with human baristas?

Please practice The RetailWire Golden Rule when submitting your comments.
Braintrust
"It’s not just accuracy and precision that customers are looking for when they head over to the local coffee shop, is it? "

"Just because someone has figured out how to deliver a service with robots, doesn’t mean that the role will become extinct immediately. "

"Hope they train these robots to smile at you as they make your order."

18 Comments on "Can baristas keep up with their robotic challengers?"

Lots of jobs are on the line because of advances in robots – add baristas to the list. But just because someone has figured out how to deliver a service with robots, doesn’t mean that the role will become extinct immediately. Over time, as the cost of these robotic systems comes down, and the quality of output becomes even better, business operators will likely find that robotic systems make sense. Every thoughtful business needs to be considering the impact robotics might have on their business – they don’t necessarily need to adopt the technology, but they’d better be aware of it and the potential impact it could have on their own business.

In addition, I think the role of the barista will evolve. Most consumers like some level of human interaction – and instant accountability. The barista role will shift to more of a host who can make manual fixes when necessary.

Evolution grinds away. It’s not hard to envision baristas, bartenders and servers of all kinds heading to some kind of new job training. Speed and efficiency are always going to win the day at a certain level of the business. The “human touch” may migrate to more luxury levels of the business. I prefer the human touch until I remember how infuriating it is to wait in line at Starbucks while eleventeen different versions of frappuccino are mixed ahead of me. It’s not the baristas fault and not the customers fault — just the nature of the beast. The scary part will come when all that speed and efficiency lets us think we should add even more choices to the menu.

Part of the appeal of the coffee shop experience is interaction with baristas (especially for regulars). As Bethany stated, the role of the barista will evolve in a situation where automation becomes more common. In terms of the overall QSR category, automation will have an increasingly prevalent role but I don’t see a mass replacement of humans by robots in the immediate future.

Literally any job that could be automated, replicated and produced at scale is threatened to be eliminated. If it comes down to pure accuracy and getting your order absolutely correct, perhaps when the economies of scale kick in, your friendly neighborhood barista may be replaced by a “coffee haus” robot.

Yet it’s not just accuracy and precision that customers are looking for when they head over to the local coffee shop, is it? This automated barista development completely contradicts the recent moves by the Starbucks Roastery, Bluestone Lane and others, that focus on the experiential and storytelling side of the art of coffee. I highly doubt Mr. Coffee Haus will be able to share the backstory of the coffee bean origins, what pairs well with the coffee, and also the small talk conversation everyone enjoys.

It’s the right amount of friction and reward with another human being that brings the customers back for more, not another automation.

I know that standing in line waiting to order is frustrating, but part of the Starbucks magic is the barista personally creating your drink. Sure, a robot can make it faster, and exactly the same each time, but the interaction is cold. There’s no human banter, no one to greet you each morning with a smile and a “Welcome! Having the usual today?” Once the novelty wears off, robots make the extraordinary ordinary. What’s next? Dinner at your favorite fancy restaurant prepared by metal hands? Some things still require the human touch.

Hope they train these robots to smile at you as they make your order.

Half of the coffee shop experience is the interaction with the person behind the counter. There’s no substitute for the “hey, how are YOU doing?” greeting that customers receive from baristas. I don’t dispute that automation is going to replace a significant number of jobs, but don’t underestimate the blowback from customers who understand that actual people used to hold those jobs.

Just because a service can be delivered with a robot, doesn’t mean it will be. Heck, are we talking about returning to the age of Automats?

I think we ought to cool our jets, focus on providing a personalized experience to people WITH people … otherwise, all consumers might as well just buy a Nespresso machine and stay home.

The Briggo seems designed to operate well in a stand-alone setting such as an airport or perhaps even an innovative work environment. So in that regard, I wouldn’t sweat as a traditional brick-and-mortar coffee house employee – but I would be evaluating the merits of such a machine if I were an event-based real estate owner or a coffee brand who wanted to license their products to be used in such machines. If this style of machine catches on, the flexibility of locations could serve an already established local coffee company well to increase their distribution beyond the fringes of their loyal “coffee community.”

Robots and baristas will co-exist. Robots fill the need for java-on-demand (like at the airport for an early flight) and baristas are for when you want a leisurely up-close-and-personal experience.

Let the robots keep the pots full. Let the baristas interact and continue to thrill the customer. If you don’t like the wait line and interaction with your barista, then use the app and perhaps automated hands will develop your creation.

ATMs didn’t kill bank tellers. I don’t believe that coffee machines are going to take out baristas. Soda machines have co-existed with retailers and restaurants. Yes, we’ll see more automation in almost every aspect of business, but for the foreseeable future, human-to-human interactions will drive the relationships that customers have with businesses.

We’re in for a bifurcated future. As the price of robotic systems declines, we’ll see them when efficiency, convenience, and price are the keys. Where the experience is the thing, we’ll still need humans, at least for now.

There’s nothing new about coffee machines, so presumably there’s a reason actual coffee shops have continued on. Indeed, they’ve done very well; perhaps people seek interaction with other humans? Whatever the reason, while I’m sure this device will find a market, I don’t think the barista is in any danger of entering the Endangered Species list anytime soon.

Robotic tech in retail is a way to deliver precise products where it is appropriate, basically turning into a coffee machine. Some people go to coffee shops just to get coffee and leave, some like a few minutes of peace and human interaction. Both can coexist. I like to use the bar example. How many people would want to go to a robot bar for a drink after work and stare at a drink dispenser?

Except for the app ordering and the robot arm that moves the coffee cup from one spot to another, is this really any different than any previous automated coffee machine? Or the self-serve Coca-Cola soda dispensers now found in so many QSRs and fast-casual restaurants that let you mix your own soda blend? Until the cost for these robots is very low, it feels like a solution looking for a problem. Can such a robot replace a barista? Sure. But would a premium brand like Starbucks want to? That remains to be seen. Airport coffee stands are one thing, but….

I think it is a bit naive to say robots can’t do the same thing like give a smile and poo-poo technology fears as overblown.

Robotic baristas are an entertaining fad. While human baristas are generally too busy to create a relationship or reinforce the brand DNA. Both are equally capable of replicating the recipe of a passion product that is purchased often.

So it comes down to taste – not the delivery mechanism. I’ll put-up with anything if the coffee tastes better. My guess is most coffee drinkers are the same way.

Braintrust
"It’s not just accuracy and precision that customers are looking for when they head over to the local coffee shop, is it? "

"Just because someone has figured out how to deliver a service with robots, doesn’t mean that the role will become extinct immediately. "

"Hope they train these robots to smile at you as they make your order."