Is making burgers now a job for robots? 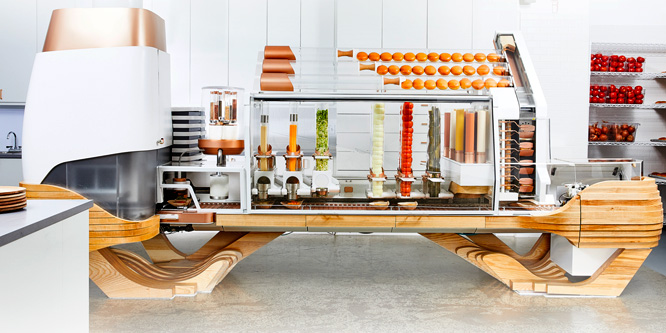 For years there has been speculation that technological advancements would eventually automate away fast food jobs. The launch of a new robotic burger chef will doubtless have people wondering if that possible future is here.

Bay Area culinary robotics startup Creator has opened a restaurant of the same name, built around a robot capable of creating a custom burger — with a price tag of $6 — from start to finish, according to Bloomberg. The robot is capable of slicing and toasting the bun, grinding the meat, adding seasoning, cooking the patty and adding toppings all to order.

A YouTube video from TechCrunch shows a demonstration of the Creator robot. Buns and burgers are pushed down a Rube Goldberg-esque conveyor belt that carries out a step-by-step preparation, while artificial intelligence (AI) sensors monitor characteristics like “doneness.” In the video,

Addressing the labor market issue, Creator’s inventor argues that the concept has a sizeable in-house staff paid $16 an hour and that, in general, the removal of the need for repetitive work like burger flipping will allow people to take on more fulfilling roles.

It is not clear if there are plans to offer the technology as a turn-key solution for other quick serve or fast casual restaurants.

Some other fast food restaurants have been taking other steps in the direction of automation. Most notably, in 2016, McDonald’s began piloting its “Store of the Future,” featuring automated touch screen kiosks for ordering (alongside other new features like table service and more varied burger toppings).

Creator isn’t the first attempt at creating a robotic fast food chef. Last year Miso Robotics released Flippy, a simpler but effective robotic burger-flipping mechanism. In June, The Wall Street Journal reported that Caliburger planned to implement Flippy in 10 of its 50 restaurants by the end of 2018.

DISCUSSION QUESTIONS: Is Creator among the first steps toward total automation of fast food jobs? Are there reasons why fast food and quick serve restaurants might avoid adopting similar solutions?

Please practice The RetailWire Golden Rule when submitting your comments.
Braintrust
"What is the actual employment profile of a store or restaurant with automation? It’s actually better than the store without it."

"We’re sorry ... your last cholesterol test came back a little bit high. You can’t have the cheeseburger and fries today ... a soy burger and a salad?"

"This is one more step in automating the supply chain of bringing quick service food to our tables."

13 Comments on "Is making burgers now a job for robots?"

Fast-prep foods (including pizza) is a natural space for more automation. As minimum wages and the challenges of staffing and training increase, streamlined automated production will be increasingly applied, fueled by the low cost of capital.

I have a lot of mixed feelings about automation in retail, especially of the “will we have a completely automated store with no humans in the near future?” kind. Someone has to load Creator. Someone has to make sure it’s working and not, I don’t know, setting the restaurant on fire. I’m pretty sure someone still has to assemble the meal – the fries, the drink, the burger, etc. And if Creator somehow makes a mistake, there needs to be someone there to talk to about it (unless you want the restaurant vandalized). I once did a project with a fast food company that I won’t name here, where an executive at the time told us that their hiring pool was pretty much “drug addicts and homeless” because that was all they could get for what they were willing to pay. This person also said their own children flat out refused to work in the company’s restaurants because the work sucked and the pay was worse. So, I hate it when the discourse about automation… Read more »
7
|
0
-   Share

I love this idea, and I hope Creator gives the robot a catchy name and “persona” that will create some happy feelings that signify inclusion, not “job stealer” anxiety! Staff should also be trained to talk about this technology as a quality enhancer for the operation. Last thought — open the kitchen up so people can see the robot in action!

Yes and no. There is beautiful computer-generated art. And there is the art that flows from the spirit, mind and hands of a gifted Artist. Are the creatives of our world thereby doomed? Of course not. One may be beautiful but the other goes beyond that to touch your heart. Who do you admire? The unnamed, unseen programmer in an unknown location…or the weathered artist with the messy studio and permanent paint stains absorbed into his or her gnarled fingers that still produce images of awe. Look – no one at a fast food outlet marvels at the creativity and uniqueness of their burger. “No pickles” is hardly worthy of proclamation. So yes, if you just want a decent burger, it will inevitably be produced robotically. On the other hand you’ve seen the Food Channel’s programs about burger joints in places you’ve never heard of that make a truly unique product not found elsewhere. The artist lives behind the grill creating a meal for you worthy of a field trip. May it be forever so.
4
|
0
-   Share

There’s a place for robotics, but nobody thinks they’re going to replace humans en masse in the foreseeable future. Consult the boardroom scene in RoboCop …

First of all, “cooking robots” have been with us for some time now. The first models were marketed as options in the home, “kitchen of the future.” Next, I really think we are asking the wrong question. Creator isn’t the, ” … first step toward total automation of fast food jobs.” Total automation? That means no people servicing customers and/or robots. Not likely. So if we are really talking about significantly more — but not total — automation, the answer is probably yes. As I said, this isn’t new technology and my guess is that it is being marketed for its novelty value. But moving forward, if your goal is to produce relatively exactly the same meal over and over again that is a job a robot can do now. Ian’s point about the ability of an individual chef to produce a unique burger is well taken, but fast food is all about speed and consistency, not flair or deviation from the norm. There’s already some automation in foodservice now, even in customer-facing functions like… Read more »
3
|
0
-   Share

I think that robotics/automation are best as part of a hand-in-hand strategy with humans. For example I see McDonald’s use of touchscreens for ordering as part of a strategy to free up staff to fulfill orders (rather than take them) and therefore get food to customers faster. Now of course you could say that those touchscreen orders could go to a robot like Creator to actually cook. But at the same time the more automation that you introduce the more you need humans to oversee it and step in when things go wrong. Certainly I think we’ll see more happen in the fast food space but hopefully with companies not trying to run before the tech can walk!

If the burgers taste good, I don’t see why this won’t catch on. However, even if it does, it is not the disaster some will make it out to be. For a start, back-end automation does not mean front-end automation. A fast food outlet without any staff to interact with will not be everyone’s preference. Moreover, robotic technology will new create opportunities and jobs elsewhere.

I’d also like to see the financials of this. What is the return on capital? The investment required for maintenance? Does the sunk cost impact the business metrics? And so on, and so forth!

Let’s not kid ourselves. Most of what we eat in fast food restaurants is already made by robots in factories. This is just the next step.

This is one more step in automating the supply chain of bringing quick service food to our tables. Whenever people talk about robots and AI replacing humans, I think of all the automation that occurs in the production of so much of our food supply. At one time, there were more human jobs in those areas than there are today. It’s just the natural evolution of the workforce. Throughout history, post-industrial revolution, jobs have evolved from very repetitive and low-wage to more highly skilled, requiring more thought and therefore more expensive labor. This will be no different. I see robots replacing some of these repetitive tasks in restaurant kitchens so the labor force can spend more time serving customers and making the experience a more pleasant one all around. Will some jobs be lost? Yes, but many will also be created as a result!

Food Odyssey 2030, when you order that burger and fries via Alexa and the automated burger chef says: “We’re sorry, you didn’t follow our instructions on the GPS despite three reroutes, and your last cholesterol test came back a little bit high. You can’t have the cheeseburger and fries today, perhaps a soy burger and a salad?” Compliance is mandatory — resistance is futile.

There are some jobs that robots can handle well and this might be one of them. Anything that can be defined and done repetitively. Of course the robot could not be left alone to man the store but they could certainly flip burgers. The obvious question is, how much will the robot cost and how much will it cost to maintain? If these numbers are less than the cost of an employee, then go for it. For my 2 cents.

A while ago, one of the Chicago universities did a study into the effects of setting a minimum wage. The broad upshot is that certain businesses would go to the wall — however the study concluded that they would simply be replaced by other businesses that could pay the minimum wage. Nor did it suggest that it would necessarily mean consumers paying more — rather a legacy fast food restaurant would be replaced with an insurgent that had a different business model that could accommodate higher wages. The point in this case is that businesses are constantly looking for ways to save money, and automation may be one of those. However that may in itself create a gap in the market for competitors to offer something different. If Burger King goes fully automated, perhaps McDonald’s increases the human contact quotient, automating the kitchen but providing more time for staff to interact with customers. We’re already seeing distinct trends in how people dispose of their incomes in the West with a shift from stuff to experiences.… Read more »
2
|
0
-   Share

Braintrust
"What is the actual employment profile of a store or restaurant with automation? It’s actually better than the store without it."

"We’re sorry ... your last cholesterol test came back a little bit high. You can’t have the cheeseburger and fries today ... a soy burger and a salad?"

"This is one more step in automating the supply chain of bringing quick service food to our tables."