Is CGI Hollywood’s gift to retail? 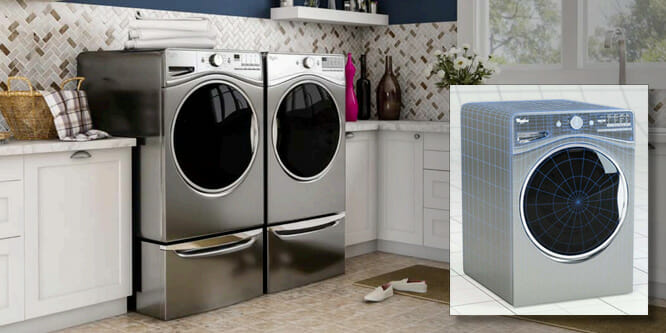 Hollywood turned to computer generated imagery (CGI) to not only dazzle audiences, but as a practical solution to creating settings or even characters that are impractical to accomplish by traditional means. Retailers are now getting serious about the technology for the same reasons — to streamline operations and reduce production costs, but also to involve consumers in more immersive experiences.

Retailers invest major chunks of their budgets these days to produce still and video imagery for their online stores and catalogs. Company creatives are feeling the pressure to produce content that is not only enticing, but also highly detailed and viewable from 360 degrees.

Some retailers and brands do a good deal of their creative work in-house, but usually collaborate with agencies and third-party services for some portion of it. CreativeDrive is a leading “content service provider” (CSP) that lists among its considerable roster of clients Walmart, TJX, Unilever, Estee Lauder, Lands’ End, Google, Bloomingdale’s, Kohl’s and Office Depot. CreativeDrive runs 150 studios worldwide with a staff of over 1000 and a broad array of freelance talent.

“We have technology that’s fully integrated into their proposition to really expedite getting the content to market quicker and more effectively,” CEO Myles Peacock told RetailWire.

For some time, CreativeDrive has been looking to gear up with CGI capabilities, and last week announced the acquisition of 3D visualization and AR tech startup Decora in “a structured deal, potentially worth in-excess of $100 million,” according to a company release. Mr. Peacock saw in Decora the ability to produce CGI content efficiently and at scale. Currently, the Decora is delivering 15,000+ images and 7,000+ virtual scenes per month.

“I was very impressed with the fact that this company could in effect capture a 3D model, give it a much more integrated experience to the consumer for a cheaper price that it would be to ship the product itself,” he said.

CreativeDrive, in other words, will be able to integrate at the retailer’s DC or even at a manufacturing facility in China to create a 3D reproduction of the product, thereby eliminating the cost and time of getting that product to a studio in the U.S., let alone prop-styling, lighting and shooting it.

Decora will also aid CreativeDrive in modeling virtual sets for its retail clients, whether a Christmastime living room scene or a poolside patio. For each new season, art directors will update the look and add in the new CGI-created products, thereby forgoing the need for studio work entirely for those seasonal set-ups.

And yet it is the combination with AR and VR technology that CreativeDrive has their “future-proofing” eyes on.

“This is where we see a real game-changing proposition,” Mr. Peacock told RetailWire, “because Decora has built up hundreds of thousands of CGI models now, and our ability to then put them onto the digital shelf for consumers to interact with and then layer data over the top of that for an extended consumer buy opportunity — it’s just a whole user experience AR opportunity that’s immense.”

DISCUSSION QUESTIONS: How might retailers and brands best leverage CGI in the production of product imagery and sets? How big a role will CGI production play in efforts to create more engaging online experiences for consumers?

Please practice The RetailWire Golden Rule when submitting your comments.
Braintrust
"I would expect to see more uses of CGI in advertising and promoting products as retailers begin to invest in this concept."

"This can be an extremely useful tool for retailers IF there is clear notice that CGI is being used for illustrative purposes."

"One of the best reasons to apply these technologies is to expand the reach of your products and services."

9 Comments on "Is CGI Hollywood’s gift to retail?"

CGI will play a significant role as retailers become aware of its capabilities. It’s faster and cheaper than conventional methods such as photographing products and provides an endless world of creativity. It also allows the instant delivery of things the client may need — last-minute changes that ordinarily are a nightmare in the ad world can now be taken care of immediately without any difficulty. I would expect to see more uses of CGI in advertising and promoting products as retailers begin to invest in this concept.

If I come back in another life, I want to learn how to do CGI. It’s an amazing combination of technology and art. When done well you can’t tell it from the real thing. And yes, it’s engaging and can stir the imagination. So here’s my problem. I’ve been looking for a device that measures actual hydration (not fluid consumption) in the human body. Well to my great joy I found several sites where there was imagery and description of just such a vital tool. In EVERY case but one it was all phony, no such device existed not even in physical prototype. No disclaimers, no explanations, just fraud and a lot of time wasted. I believe that’s true of many of the marvelous innovations you can find on Kickstarter and Indigogo as well. CGI can be used to “demonstrate” an electric bicycle you can fold up and put in your pocket. And frankly I think CGI was used to give me an image of the fish sandwich I ordered at McDonald’s last evening. This… Read more »
2
|
0
-   Share

I can certainly see an application for this, especially in sectors like furniture or electricals where consumers want to visualize products in different settings. I can also see a role in general content production where products can be placed into awe-inspiring environments for a relatively low cost.

All that said, as good and as realistic as CGI is, it goes against the consumer desire for authenticity. Retailers will need to ensure that they don’t overplay CGI so that what’s presented simply becomes a fake version of reality.

CGI images please the eye, but visual input to the brain which will continuously update a shoppers opinion of a product is also influenced by information and reviews, so these should augment visual images that provide an overall view toward features, benefits and value.

From a film and video perspective, let me advise caution about CGI. It has a good role — but a limited one. The most important CGI lessons we need to pay attention to come from movies. The Star Wars franchise nearly died after committing the “prequel” movies to primarily CGI creation. They became stale and inhuman. The return of the franchise came when J.J. Abrams and team returned us to the real world with CGI enhancement. There’s a tangible difference we all “feel” that’s very important. The second lesson comes in my own work: For product detail shots or when revealing the magic that makes a product work, we nearly always use computer generated animations of products — because they are clearer and don’t need the human touch. CGI CAN save huge costs on preparing catalogs or libraries of product images — especially when looking at products with a large variety of colors. The key is: If you need human warmth in your photography or video, avoid CGI. If you are documenting a range of… Read more »
2
|
0
-   Share

There are some great examples of retailers and CPG brands leveraging CGI or AR/VR. One of the best reasons to apply these technologies is to expand the reach of your products and services. Now shoppers in rural areas and those people who cannot shop at a physical store can use these tools to see a very realistic rendition of the product and its uses, and even see it in their own home setting. The sky is the limit for ways to use this in the near term.

Use the technology to shorten the decision process from going into production to having the product in store. Then create a pre-launch theatre whilst the first production runs are built up.

If it’s a gift, I think it gets a lot of returns. You can smell CGI movies a mile away. I’m ALWAYS aware of CGI, fake is fake. Toys “R” Us had real 3-D packages and couldn’t get people interested in the products. Smaller retailers understand there is nothing like the real thing. Nothing.

Braintrust
"I would expect to see more uses of CGI in advertising and promoting products as retailers begin to invest in this concept."

"This can be an extremely useful tool for retailers IF there is clear notice that CGI is being used for illustrative purposes."

"One of the best reasons to apply these technologies is to expand the reach of your products and services."