Is DoorDash ‘doing the right thing’ for delivery people? 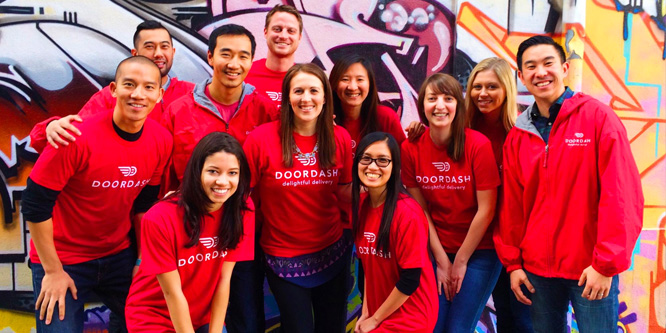 DoorDash announced that it is changing how it pays its workers. The restaurant delivery service, which previously factored tips provided by customers into what it pays those making the deliveries (AKA dashers), will no longer do so.

The company came under renewed scrutiny for its practice of using customer tips to pay workers after Andy Newman, a New York Times reporter, described the experience of working delivery jobs at several on-demand service companies. In a nutshell, it isn’t easy for people trying to make a living in the gig economy.

DoorDash customers made their displeasure with the company known, prompting a response from the company’s CEO Tony Hu on Twitter.

In a series of tweets, Mr. Hu wrote that DoorDash had created its previous pay model to make “dashers whole when a customer left no tip” and that the “average contribution” paid to workers had “stayed the same” under the plan.

But, Mr. Hu wrote, despite the company’s belief that it was “doing the right thing” by those making deliveries, it was clear that the service’s customers did not like feeling as though “their tip did not matter.” The new plan, whose details have not yet been made public, “will ensure that dashers’ earnings will increase by the exact amount a customer tips on every order.”

While Twitter responses are not often a reliable reflection of public sentiment on a given issue it appears from DoorDash’s feed that a) customers were unhappy with what they know about the service’s previous compensation policy and b) they aren’t buying its response to the criticism. Here are two examples:

“I’m just going to stop tipping through the app and will tip my Dashers directly. I don’t trust you to pay Dashers what they’re due.”

“A news story and some public shaming shouldn’t be what gets you to finally do the right thing. I’ve deleted my account.”

DISCUSSION QUESTIONS: If DoorDash, as it claims, has been fairly compensating its “dashers”, why would it change its model rather than explain how the current system benefits workers? What do you think of DoorDash’s response and how should it manage communications about worker pay going forward?

Please practice The RetailWire Golden Rule when submitting your comments.
Braintrust
"If I, as a customer, give a tip then I expect that to be on top of someone’s normal wage. I do not expect a company to use it to subsidize their wage bill."

"The public understands that tips are incremental to a wage, not the wage itself."

"Ultimately, the consumer does not care about payment models, they care about fairness."

8 Comments on "Is DoorDash ‘doing the right thing’ for delivery people?"

There may be several reasons behind why DoorDash is changing its model rather than trying to explain the process. Two come quickly to mind. The first is that trying to explain the model to its current and potential customers it would be costly and never-ending process. However I expect the main reason is that once a story like this catches the attention of the public it is almost impossible to change the narrative. The easy course of action is to issue a statement about how they are making a change and how it works and benefits their Dashers.

It changed because it was extremely unfair and any person with a modicum of decency recognized that fact. If I, as a customer, give a tip then I expect that to be on top of someone’s normal wage. I do not expect a company to use it to subsidize their wage bill. It is dishonest, mean-spirited and immoral.

I agree with Neil’s sentiments. As with food delivery apps, coffee cafes and other counter-serve establishments have built easy tipping into their POS systems, seemingly shifting the onus onto the customer to augment employee wages. It’s clear to many of us that it allows employers to keep their wages in check. I have sympathy for both the business owners and employees, so I usually pony up a tip. But once I do so, I expect the retailer to pass that directly to employees without any “new math” involved.

Communication is tricky. It’s not necessarily what you say, it’s always about how it’s perceived. Controlling the narrative is therefore always challenging. Therefore “explaining” is insufficient because there’s no guarantee that the desired message comes through. The public understands the numbers associated with a fair wage. The public understands that tips are incremental to a wage, not the wage itself. And I’m with those who use cash for a tip, sometimes putting it in the hand of the waitstaff just to make sure the worker gets what I intended. Note how it is the employer we are trying to circumvent.

Tipping should be done only where service is being provided over a period of time, like at a restaurant. For simple transactions, like a delivery or counter service, most consumers would likely prefer the tip be included in the price of the service. Consumers don’t want to be forced to decide whether to tip and if so, calculate how much. There’s always the nagging question: Did I give enough, too much?

‘Cuz maybe their claim was just a lie? Let’s be candid here. Except for a few craftspersons with unique talents, the “gig economy” is just a euphemism for exploiting people. While there are certainly some who just want part time work and will benefit from its presence, they are being carefully managed to control those who have little choice about taking whatever work they can find. Hopefully for them — and ultimately society — it’s just a stepping stone to something more sustainable.

Ultimately, the consumer does not care about payment models, they care about fairness.

The consumer sees “dashers” that are doing these “gig economy” jobs out of necessity, not choice. The consumer knows that the delivery high school boy is being replaced by delivery man, and that a tip was a reward for a job well done and earned by the “dasher.”

DoorDash has created resentment from employees and consumers and storm of negative consumer coverage in social media. At this stage to stubbornly hold on to “doing the right thing” will not work. It needs to recognize they are not the consumer’s only food service delivery option and simplify the model in spirit of fairness, or the competitors will use this as an advantage.

DoorDash interfering on the intent of a tip given to delivery person hinges on an illegal action in many states. Special lower hourly rates are used in many states to exempt tipped employees from state controlled minimum wages. This was designed for an additional revenue stream to go directly to the employee from tips, NOT for the employer to include tip compensation for an employee based upon their tips. States include this in their labor laws to ensure that the taxes they collect are accurate when auditing the employer, and likewise, accurate when auditing employees, as each one reports their revenue/income for each year.

Braintrust
"If I, as a customer, give a tip then I expect that to be on top of someone’s normal wage. I do not expect a company to use it to subsidize their wage bill."

"The public understands that tips are incremental to a wage, not the wage itself."

"Ultimately, the consumer does not care about payment models, they care about fairness."