Is Primark ready to bust out in the USA? 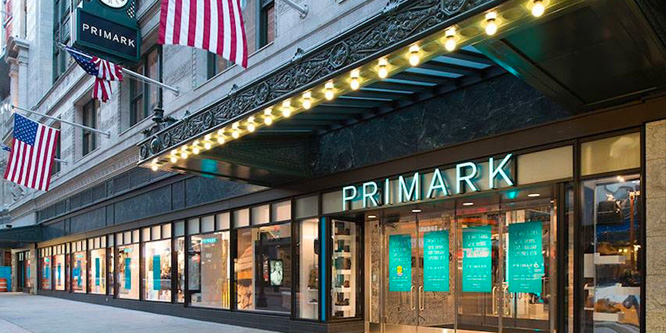 With its new Chicago location, fast-fashion retailer Primark is opening its first U.S. store outside of the East Coast. The 45,000-square-foot space on State Street near Michigan Avenue that formerly housed a Gap will be the chain’s ninth American store overall.

“We are fortunate to have found and secured such an impressive location in the heart of the vibrant Chicago market,” said Tom Meager, Primark’s property director, in a news release.

The Dublin-based retailer, which is owned by Associated British Foods (ABF), opened its first U.S. store in Boston in 2015 and then seven more locations before throttling back in recent years. Primark is planning to open a store in the long-delayed American Dream mall in northern New Jersey, which is slated to open in October. It also is moving to open a store in Miami next year.

Richard Chamberlain, an analyst at RBC, told the Financial Times that Primark has the capacity to supply up to three times as many stores in the U.S. that have been built or announced.

Primark has driven its growth with low-priced fashions typically at $25 or less. While this has proven successful in the past, Neil Stern, senior partner at McMillanDoolittle, cautioned in an interview with the Chicago Tribune that Primark is still not well known in the U.S. and could also face headwinds as consumers begin to rethink “disposable fashion.”

Primark currently operates more than 370 stores in 12 countries across Europe and the U.S. In April, it opened its largest store to date, a 160,000-square-foot unit covering five floors in Birmingham, England, that features apparel for men, women and children plus a barbershop, beauty products, a beauty studio and homewares. The location also features three different dining experiences, including the first Primark Café with Disney.

DISCUSSION QUESTIONS: Does Primark’s relatively slow expansion make your more optimistic or cautious about its future prospects in the U.S.? Where do you see the greatest opportunities and challenges facing the fast-fashion retailer going forward?

Please practice The RetailWire Golden Rule when submitting your comments.
Braintrust
"Primark has been cautious and careful in its expansion which is a credit to the company, but it also signals how tough a nut to crack the U.S. market is!"

"...my guess is that Macy’s and J.C. Penney know very specifically what to expect when Primark comes to town. Pain."

"Fast fashion seems to have topped out its market. Primark doesn’t need to throw itself into the mix. I don’t get it."

11 Comments on "Is Primark ready to bust out in the USA?"

While Primark has been a very disruptive force in the U.K. and European markets, its impact on the U.S. has been less than impressive. Part of this comes down to the small scale which is, in turn, a function of a very limited expansion plan. None of this is to say that Primark can’t become more significant in the U.S., just that there are more dynamics here that are unfavorable to its business model. The first is that the market for apparel is really, really saturated. Any new player needs to bring something very distinct to market. Primark’s claim to fame is that it offers the cheapest fashion in the market. In Europe this largely holds true; in the U.S., it is not always the case as there are a lot of value-focused retailers. The second issue is that Primark is focused on everyday low pricing. However, that is not always what activates U.S. shoppers in apparel. Many want discounts and bargains: getting a $50 item for $25 can be more compelling than getting a… Read more »
6
|
0
-   Share

I’m not looking at the pace of their expansion, I’m looking at the quality of their execution. And I give Primark an A+ on that execution. Focus on key items. Price/value relationship. Seasonal conversion. Color management. Presentation … the ability to take straightforward product and create interesting and textured stories. I have argued before that Primark won the race-to-the-bottom in pricing. But they did it in a manner that still gave the customer a nice shopping experience.

Primark’s slow growth means that they have not yet stolen much market share. But I watched them open in a mall I was then visiting three times a week. And I know from many conversations with store managers in that mall that Primark captured significant share in that mall (Danbury, Connecticut). I am not sure how things have stabilized three years later, but my guess is that Macy’s and J.C. Penney know very specifically what to expect when Primark comes to town. Pain.

It’s hard to judge Primark’s prospects — without having visited one of their sites — but Neil Stern is certainly correct that the company faces some headwinds right now. Topshop is the latest example of a fast fashion retailer that didn’t gain traction in the U.S. market, and Uniqlo is another global retailer that has failed to meet growth expectations here.

Maybe Primark can use the struggles of Forever 21 as an example of what happens when a retailer expands too quickly. Let’s face it — it’s a tough time to be a mall-based specialty apparel retailer.

Why is it that companies convince themselves that markets are infinite? Fast fashion seems to have topped out its market. Primark doesn’t need to throw itself into the mix. I don’t get it.

Neil Saunders is spot on! And I think that is why this will be a slow “let’s learn as much as we can about this new marketplace” before going crazy with openings.

While Primark is formidable in Europe, they’ll need to differentiate themselves with unique merchandise and/or superb experience to attract US shoppers.

While fast-fashion may continue to have a place in retail, there appears to be a shift towards more sustainable items. Companies such as Everlane and Allbirds are making sustainability a core component of their overall strategy and consumers are responding. The challenge that Primark and other fast-fashion retailers face is to continue to make themselves relevant as other brands emphasize quality, ethical sourcing and environment friendliness.

To succeed, fast-fashion brands will need to look at other options such as scaling back assortments to focus on fewer items with better quality or different marketing strategies to encourage customers to mix-and-match high-end items with cheaper, more disposable pieces to create a look.

Another tactic is to take a page from the Birmingham location and create a theatrical aspect to the stores and create a destination experience for the consumer. Primark has certainly been very successful to date and their slow expansion into can’t-miss markets is a prudent approach.

Just like other European retailers like Aldi and Lidl, entering a new geo market can be fraught with difficulties — and retail is built one store at a time. The slow moving expansion is just fine and shows they have the smarts to play it right in the US, especially when starting off. For fashion there will continue to be tremendous competition including from manufacturers and apparel brands beyond other fast fashion retailers. When starting out, location matters — and that’s what they need to get right first. Will be a retailer to watch.

There’s no “right” pace to expansion, and the list of (overly) ambitious failures is long (“Fresh and Easy,” anyone?) That having been said, new retailers often generate a lot of “buzz,” and there’s a limited window to take advantage of it … before the next “new thing” comes along and grabs the headlines. So it’s a complex process of juggling the tangible (financial) vs. the intangible (marketing). I wouldn’t presume to know whether or not their approach is the right one.

(On a side note: the Boston store shown above is in the old Filene’s flagship: a more vivid illustration of how retail has changed over the decades is hard to imagine.)

Slow and steady wins the race and they should continue that slow expansion. Many fashion brands who have rapidly expanded over the years end up facing a correction in their efforts, having to close down many locations or even their whole business.

Primark has a had a relative competitive advantage in its initial markets where direct competition hasn’t been as strong.

In the US, the competition is much stiffer and the market has to be approaching saturation as well established off-price players add more stores, discount mass merchants up their omnichannel game and Kohl’s, Sears/Kmart and J.C. Penney try to find a long-term reason for being.

Bottom line, I have modest expectations for Primark’s success. A measured approach, as other players fall by the wayside and they fine tune their model to US tastes and expectations, is likely the best course.

Braintrust
"Primark has been cautious and careful in its expansion which is a credit to the company, but it also signals how tough a nut to crack the U.S. market is!"

"...my guess is that Macy’s and J.C. Penney know very specifically what to expect when Primark comes to town. Pain."

"Fast fashion seems to have topped out its market. Primark doesn’t need to throw itself into the mix. I don’t get it."