Is Toys ‘R’ Us starting its comeback in Kroger’s aisles? 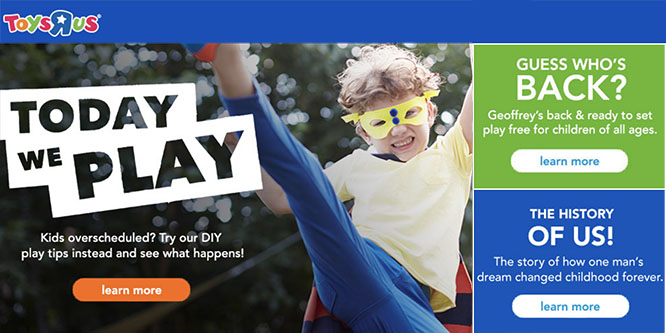 Kroger has announced a partnership to open Geoffrey’s Toy Box popups this holiday selling season featuring brands that have been exclusive to Toys “R” Us.

Starting in November, Geoffrey’s Toy Box branded merchandise will appear in nearly 600 stores across Kroger including in its Ralphs, Smith’s, Fred Meyer and namesake banners with displays featuring the chain’s mascot, Geoffrey the Giraffe. The departments will feature a selection of 35 children’s toys ranging in price from $19.99 to $49.99. They include toys from Animal Zone, Imaginarium, Journey Girls, Edu Science, You & Me and Just Like Home.

“Geoffrey’s Toy Box delivers a unique shopping destination within Kroger stores,” said Robert Clark, Kroger’s senior vice president of merchandising. “We’re excited to offer Geoffrey’s Toy Box this holiday season to provide our customers with the opportunity to purchase a selection of toys once exclusive to Toys “R” Us.”

Toys “R” Us liquidated in June after failing to restructure under bankruptcy protection. The chain’s intellectual property including Geoffrey and other trade names, a portfolio of more than 20 exclusive brands, registry lists and website domains, were set for auction in October, but the retailer’s lenders, Solus Alternative Asset Management and Angelo Gordon, assumed the assets instead. The hedge funds made the decision after determining that they’d likely get a better payback by attempting to revive the Toys “R” Us and Babies “R” Us businesses.

Bloomberg on Friday reported that the hedge funds are now looking to raise capital with a plan to reopen physical stores under the Toys “R” Us name in 2019. The retailer’s leases and distribution centers were sold in the liquidation.

A comeback comes as several retailers are investing more in the toy category to capture the void created by the exit of Toys “R” Us. Target and Walmart are expanding their toy and baby aisles, Party City is opening a number of Toy City seasonal shops, and FAO Schwarz and KB Toys are plotting comebacks.

Please practice The RetailWire Golden Rule when submitting your comments.
Braintrust
"There is an opportunity for Kroger to move more squarely into toys, which would help bolster margins and sales. But this needs to happen as part of a wider push into non-foods"

"Putting Geoffrey’s Toy Box holiday pop-ups in Kroger is fine, but I doubt it will be that strong of a move."

"Over the last several years, I’ve procrastinated on holiday shopping. Something that is difficult to consistently procrastinate on is your groceries."

11 Comments on "Is Toys ‘R’ Us starting its comeback in Kroger’s aisles?"

The demise of Toys “R” Us creates opportunities in the market, and Kroger is merely jumping on the toy bandwagon. Leveraging the Geoffrey’s brand may lend some cachet, but I doubt that this will be a huge draw in and of itself. Offering toys as a pop-up is a good way for Kroger to test market response under real-world conditions without making significant and expensive long-term commitments. Ultimately, the market will decide if this is a good move — I’d say it will be modestly successful for Kroger, but overall neutral for the category.

Putting Geoffrey’s Toy Box holiday pop-ups in Kroger is fine, but I doubt it will be that strong of a move. First of all, if Toys “R” Us had been successful with its name and products, it probably would still be in business. Unfortunately, the company lost its edge and that combined with all the debt is why they failed. Geoffrey also had become more of a thing of the past. The products featured at Kroger’s will speak for themselves which will come down to price and quality. Moreover, with all the other retailers getting into the toy market this year, there will be enormous competition which makes Kroger’s chances for success even less. It would be best for Kroger to focus on its core business.

While on paper this looks like a smart idea, I hope that Kroger has analyzed their assortments strategy carefully to make the bet that toys are a category that grocery shoppers will appreciate and shop, whether Geoffrey is there or not. If they believe that grocery shoppers truly do want to shop for toys, then this feels like a good move. If they are simply banking on Geoffrey to drive traffic (and basket size) instead of carefully analyzing their assortments to identify toys as an opportunity, I am skeptical that the fuzzy giraffe will move the needle.

I do love the idea of pop-ups for Toys “R” Us however, I am not seeing Kroger as the ideal brand for this. Shoppers do not typically head to the grocery store when they are thinking about buying gifts nor are gifts on the mind when planning dinner. It will be interesting to watch however not likely a big win for either. For my 2 cents.

This is a good opportunity for Kroger to cash in on the gap left by the closure of Toys “R” Us stores. Given the number of people that shop for groceries over the holidays, it will have some excellent exposure.

As to the longer term implications, there is an opportunity for Kroger to move more squarely into toys, which would help bolster margins and sales. However, in my view, this needs to happen as part of a much wider push into non-foods which also requires a revamp of stores and the way in which such merchandise is sold.

Toys at Kroger is a good shopper move because it lets parents see what kids react favorably to without the inconvenience of another trip. My guess is that Kroger will find enough sales lift to justify the experiment.

Over the last several years, I’ve procrastinated on holiday shopping. Something that is difficult to consistently procrastinate on is your groceries. There’s no reason why this can’t benefit Kroger if given the right floor space to increase share of wallet during the next 50 days.

Good for Kroger! Toys are this season’s bounty. Given the vacuum left by Toys “R” Us, every retailer will make shelf space available for this category. Kroger using this category and making it a seasonal pop-up store-within-a-store makes perfect sense. It makes it easier and convenient for their shoppers. Isn’t that what retailers should be doing?

Kroger is wise to test this “toys with your groceries” concept via pop-up because it is fraught with peril.

Millennials (parents) have proven time and again that they are most responsive to specialty (brandless) retail — they want the perceived expertise and credibility of “craft curation,” especially when it comes to their children’s needs. Recycling Geoffrey from a bankrupt, discount toy emporium of another time feels a little tone deaf to me. Not to mention the inevitable hassles of having to negotiate AWAY from the toy aisle every time you bring your toddler with you to buy food!

That said, pop-up is the ultimate market test and Kroger is smart to test drive their bargain-based investment before making it an all-store initiative!

There is definitely a key a theme to the comments here that I agree with — it’s all going to come down to the products, the merchandising strategy and the execution. This could be successful, but curation, pricing strategy and ensuring a fit inside of Kroger’s brand (and shopper expectations) is going to be everything.

I can’t imagine a more effective way to completely eliminate whatever (already really) small chance a brand has for a comeback than to place its products — and its mascot! — in someone’s else store. “Mommy, I want to go to Kroger’s to see Geoffrey”: smart, or at least low risk for Kroger, idiotic — or is it just desperate? — for TRU.

Braintrust
"There is an opportunity for Kroger to move more squarely into toys, which would help bolster margins and sales. But this needs to happen as part of a wider push into non-foods"

"Putting Geoffrey’s Toy Box holiday pop-ups in Kroger is fine, but I doubt it will be that strong of a move."

"Over the last several years, I’ve procrastinated on holiday shopping. Something that is difficult to consistently procrastinate on is your groceries."