Is Walmart’s CEO the right leader for Business Roundtable? 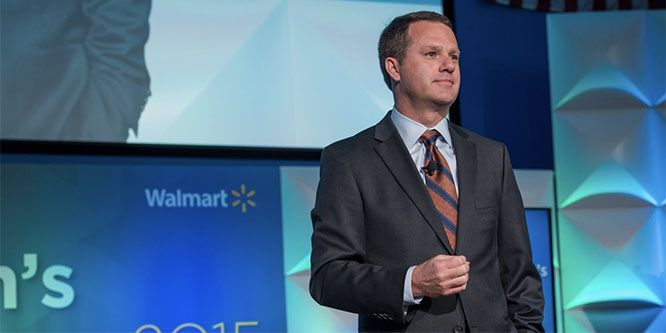 In August, Business Roundtable, the lobbying group composed of the nation’s leading CEOs, controversially updated its corporate governance principles to pledge to work for more than shareholders. On September 19, the nonprofit named Walmart’s CEO, Doug McMillon, to guide the effort.

For 20 years, the stated policy of Business Roundtable has been a company’s primary purpose is to “maximize shareholder value,” echoing the tenants of free market economist Milton Friedman. With a new purpose to promote “an economy that serves all Americans,” corporate leaders are now expected to take into account “all stakeholders” — including workers, suppliers, customers and, essentially, society at large

Critics called the updated pledge vague in details with some believing it will amount to lip service. Others charge responsible investing only sacrifices profits and performance.

The move comes as Millennials, in particular, are increasingly choosing who they will buy from and work for based on social stances and values.

Mr. Dimon said in a statement, “At a time when our organization is reaffirming the significance of corporate commitments to workers and communities as a critical piece of creating long-term value, Doug is uniquely experienced to lead by example and ensure our voice is heard.”

Walmart’s CEO since 2014, Mr. McMillon has earned credit for reviving Walmart’s momentum, including just notching its twentieth straight quarter of same-store growth at its U.S. stores. The retailer also earned widespread coverage more than three years ago when it raised wages and increased training for hourly workers. It has also been at the forefront of sustainability initiatives.

In early September, Walmart again landed on the front pages for its move to no longer sell certain kinds of ammunition and asking customers to not openly carry firearms in its stores. That decision followed two mass shootings in separate Walmart stores.

Mr. McMillon said in Business Roundtable’s statement, “As Chairman, I commit to keeping Business Roundtable CEOs at the forefront of constructive public policy debates as we pursue an agenda of greater growth and opportunity for all Americans.”

DISCUSSION QUESTIONS: What do you think of Business Roundtable’s revised purpose statement and is Doug McMillon the right person to drive the change? Does Mr. McMillon’s appointment pack any benefits or risks for Walmart?

"The revision elevates accountability to a level of responsibility commensurate with the business challenges facing today’s economies and people."

"It’s great to finally see a retail leader in the role after heavy industry (Caterpillar) and finance (JP Morgan Chase) driving the goals of the organization."

10 Comments on "Is Walmart’s CEO the right leader for Business Roundtable?"

Walmart has proven beyond any doubt that retailers can still be successful. They have done and continue to do many things right and, as a result, sales continue to increase. Not many other retailers can make the same claim. Too many retailers have failed because of continuing outdated practices and not investing in their business, particularly their stores or their employees. We many not agree with everything Doug McMillon says or does but if I were a retailer, I’d listen. Success comes to those who are committed to the long-term and not the short-term.

Moreover, too many executives today are only interested in what is in it for them and not the company. That is hurting many businesses. Walmart has been able in many ways to continue the philosophy and principles of its founder Sam Walton, and that says a lot. Sorry Wall Street, I’m sure you do not agree.

Doug McMillon has done the almost impossible – I’m starting to root for Walmart. I see a lot of good karma actions coming out of Bentonville — not the least of which is personal. Previous management fought the city of Miami and its potential neighbors to build a store in an area where it really didn’t make sense – when they bought the property it was one thing, by the time Walmart wanted to open there it had turned into an arts and upper middle class neighborhood. In conversations with their management at the time, I could get to no sense of reality beyond “we want it because we want it.”

Happily, five years since those conversations, Walmart sold the land and actually never even started to build the store. That meant a lot to me. I think the company is trying to do more for its workers as well. And it’s innovating – not just relying on its bigness anymore.

So yeah, he’s a good call for the job.

Any change is difficult. When it goes to core governing principals of an economic entity, it can be downright painful. Yet how can one call promoting “an economy that serves all Americans” controversial? The revision elevates accountability to a level of responsibility commensurate with the business challenges facing today’s economies and people.

Mr. McMillon has proven his deft leadership in guiding the largest employer in the U.S. with foresight and courage. Leading the Business Roundtable offers him an even larger platform to guide policy considerations at this important historical juncture.

Can we get an Amen to that and my 2 cents!

Walmart’s appointment of Doug McMillion to CEO has been an outstanding move by the big box retail giant. McMillion epitomizes all the good leadership qualities that a modern-day CEO will need to appeal to, engage, and motivate their global workforce, but also serve as an empathetic force that helps to bind and connect with the local communities that Walmart serves.

McMillion has a monumental challenge ahead of him, but he and the Walmart leadership team are off to a good start. In complete contrast to what we have seen with WeWork’s debacle with Adam Neumann at the helm, McMillion appears to be in service of the Walmart brand, what they stand for, their employees and most importantly the consumers.

Homing in on Walmart’s latest re-commitments and re-imagining the company’s role in health and healthcare indicates the organization’s commitment to its communities beyond shareholders. The company can do well and do good at the same time doubling and tripling down on healthcare services, mental health, and healthy food systems on behalf of consumers. Consumers want to engage for health beyond healthcare, and Walmart’s growing footprint and ethos toward health beyond investors will be good for business, for healthy citizens, and for their bottom line. For more on the Walmart growth plans in health/healthcare, see this post.

The business roundtable reflects the general sentiments of the public and clearly, a shift away from strict focus on shareholders to the broader stakeholders reflects the direction most companies have already started towards.

It’s great to finally see a retail leader in the role after heavy industry (Caterpillar) and finance (JP Morgan Chase) driving the goals of the organization. McMillon will fill the role well and take into account many of the important factors governing the retail space, including embracing the new direction away from shareholder value towards stakeholder impact.

The board is pretty diverse across industries, including our own Safra Catz from Oracle. This role Doug McMillon will fill is not about Walmart, but about guiding the economy and public policy. The member companies of the BRT employ 15MM people and the organization helps to frame public policy more than anything else. Representation for retail will be a welcome directional change and the new focus on all stakeholders reflects the retail perspective.

As consumers of all ages are leaving traditional outlets, using new technologies, receiving poor customer service, and rejecting the values of some traditional businesses, it is definitely time for companies to consider more than shareholder value. If they do not make a shift, more companies will be filing bankruptcy papers. It is imperative to see the market as it is, not as it was and view the company holistically as it moves to create value for consumers with motivated employees to make a profit.

The recent position and actions WMT has taken in regards to firearms, healthcare and vaping, along with the significant number of consumers it directly connects with, make Doug McMillon a great choice to guide this group. Our industry is stepping in and up when lawmakers or other systems don’t or can’t step up.

Without a doubt … yes, he is the perfect person. Walmart learned from Hurricane Katrina that large companies can be a force for good in the world. Walmart’s historic response to help communities and individuals impacted by that event changed them in ways no one could have predicted. However, as a former Walmart leader and someone who knows Doug, his values and insight as well as those of the company he leads are exactly what is needed from large companies in our nation right now. Business — specifically retail — is stepping up and leading on a range of topics in ways that government is not. Doug will provide a positive leadership approach to this group.

"The revision elevates accountability to a level of responsibility commensurate with the business challenges facing today’s economies and people."

"It’s great to finally see a retail leader in the role after heavy industry (Caterpillar) and finance (JP Morgan Chase) driving the goals of the organization."