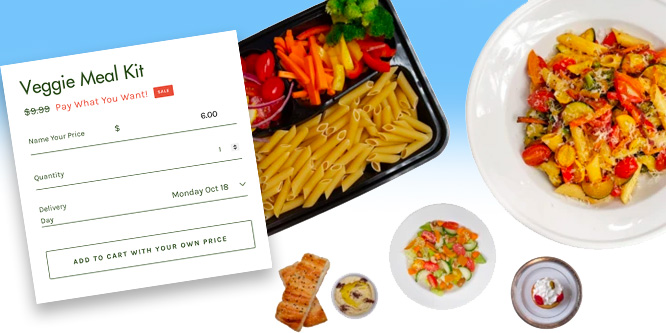 Meal kits appear to be experiencing a resurgence at the present moment and one startup in Georgia is meeting demand while offering those who would not normally be able to afford the product an opportunity to buy it.

Atlanta-based meal kit meal delivery startup Plateful.ly operates on a “pay what you want” pricing strategy, according to an 11 Alive news report. Online customers ordering a meal kit are prompted to pay a suggested price, but can pay whatever they see fit, be it more or less than the suggestion. The move is meant to allow those living with job insecurity to get the product and allow those in more stable financial situations to make up the difference. The founders of the startup say they have found the model to be sustainable and are now looking to expand their reach.

A few years ago, investors had big expectations for major meal kit startups like Blue Apron. They began backing away, however, as the space showed a high level of subscription churn and startups demonstrated difficulty maintaining profitability.

Iterations of the “pay what you want” pricing strategy, while not seen frequently, have appeared before both in retail and other verticals.

In apparel, retailer Everlane runs a yearly “Choose What You Pay” sale on overstock items that provides customers with information on the expense of producing the item and how it might be priced in a retail environment, then offers three prices to choose from. A 2016 Reddit thread, however, accuses the retailer of being deceptive in how it presents the pricing.

One of the most well-known examples of the model happened in the music world. In 2007, Radiohead made its then-new album In Rainbows available as a digital download and allowed customers to pay whatever they wanted for it. The offering did not appear to impact sales of the physical album when it was later released.

DISCUSSION QUESTIONS: Do you see a “pay what you want” model having a benefit for meal kit brands and other companies? What are the prospects of a payment model like this scaling and continuing to build good will and profitable sales?

Please practice The RetailWire Golden Rule when submitting your comments.
Braintrust
"If this approach ends up working well for both users and brands it could be a modern version of dynamic pricing, but I just don’t see it being profitable over time for brands."

This model definitely has more viability from a user perspective online versus in person because there’s a level of anonymity online that will allow for less guilt when consumers pay on the lower end. However that makes me wonder if it can actually be profitable for the brand then. If this approach ends up working well for both users and brands it could be a modern version of dynamic pricing, but I just don’t see it being profitable over time for brands.

This model is novel and highly interesting, and may see short term success, but it won’t be sustainable on a long-term basis. Though startups get a little more slack than traditional companies when it comes to turning a profit, investors – at some point – will want to see predictable paths of revenue.

Wow! Great “get scale quick” marketing strategy. But to make it permanent and fair value for both retailer and customer you need to adjust the product to reflect the price.

“Pay what you want” could be matched to product options, “at that price I can offer you the basic meal package but if you were prepared to offer more I can give you a value-added alternative.” With AI chat, this can be automated and scaled via natural language negotiation.

Well it finally happened (at least as of when I’m writing this): 100% of voters are in agreement. Voter fraud? I doubt it: some ideas that sound like they just won’t work are … well … unworkable.

Braintrust
"If this approach ends up working well for both users and brands it could be a modern version of dynamic pricing, but I just don’t see it being profitable over time for brands."