New Jersey hops back on the bag ban bandwagon 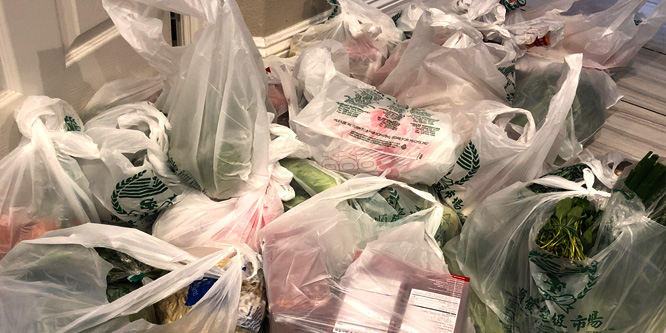 Bans of single-use plastic bags were being passed in an increasing number of states and municipalities throughout the U.S. in the latter half of the 2010s. The novel coronavirus pandemic, however, drew attention away from environmentalism and toward more immediate self-preservation strategies. Government, grocer and customer fears that the novel coronavirus could be transmitted from reusable cloth bags led to the sudden return of single-use plastics. Now, one of the U.S. states hardest hit by the pandemic is considering getting back on the road to limiting single-use plastics and other forms of carry-out packaging.

New Jersey legislators passed a bill aimed at banning the use of single-use plastic and paper grocery bags as well as plastic straws, paper takeout bags and polystyrene food containers, News 12 New Jersey reported. The restrictions apply to retail establishments greater than 1,000-square-feet that provide carryout bags (except for the paper bag restriction, which only applies to stores larger than 2,500-square-feet, according to officials).

If the bill is signed into law by Gov. Phil Murphy, there will be an 18-month grace period before the full enforcement begins, a timeline that could theoretically put the U.S. on the other end of the novel coronavirus pandemic. Businesses that violate the law could face fines of up to $5,000.

This is not the first time that New Jersey has mulled instituting a strict single-use plastic and paper ban. Mr. Murphy proposed such legislation after taking office in 2018. The law as written then was characterized as one of the most comprehensive in the nation by proponents and as onerous by opponents.

While government entities began the bag bans, large retailers, including Kroger and Walmart, started instituting programs to cut down or eliminate single-use plastics as a wave of environmentalism swept the nation.

At the onset of the pandemic, however, many governing bodies that had instituted single-use plastic bans directly called on citizens and retailers to pause the use of reusable cloth bags. Illinois governor J.B. Pritzker, for instance, recommended in March that shoppers in the state stop using reusable bags according to Illinois Policy.

DISCUSSION QUESTIONS: Is this the right time for states and cities to institute bans on single-use plastic bags? Will bans lead to the widespread use of reusable bags or some other alternative?

Please practice The RetailWire Golden Rule when submitting your comments.
Braintrust
"We have a Catch-22 here."

It’s the worst of both worlds: concerns that the virus can be spread through contact with surfaces, and the environmental impact of going back to a world of single-use plastics that aren’t being recycled nearly as much as we’d like to believe. I don’t know where the science has really come down on whether it’s okay for people to bring in their own bags while shopping. But with an 18-month timeline on the NJ law, that’s a pretty conservative approach to saying, “hey, this single-use stuff can’t keep going forever.” And they’re right about that.

Consumers need to bring their own bags to shop and pack their own purchases, period. The environment, like the pandemic, can be helped if people address them both responsibly. We can protect the former and eliminate the latter, but we have to want to do both.

We have a Catch-22 here. In my area many retailers have banned customers from bringing in their own reusable bags due to concerns about surface transmission. My local co-op has a hybrid solution, customers can “rent” bags from a kiosk, bring the bags back and exchange them for “clean” bags. I’ll be curious to see if this model has legs.

I’m not sure why we are still debating this topic. Ban plastic bags. It’s pretty simple. Unless an easier way to create recyclable versions becomes cost effective.

Will bans lead to widespread use of reusable bags? I guess so, unless use boxes or companies like Loop succeed with other innovations.

If it is the right thing to do I don’t see why they should not put the law in place now — the grace period should allow for many changes/concerns to be worked through. I lived in a city in CA when they put in laws against these bags and I now live in NJ. You find a way to make it work — I think reusable bags is the option most will go with.

There is no correlation between coronavirus transmission and banning plastic bags, here’s why:

Aside from the insufficient checkout barriers that offer frontline workers little protection at best, cashiers handle merchandise picked by shoppers. So if a shopper has infected a reusable bag, they have likely infected many items they’ve placed in their cart/basket via touch or breathing. At Trader Joe’s, cashiers also move the cart that has been touched prolongedly by shoppers. If the staff member is wearing gloves for protection effectively, then handling reusable bags is a non-issue. So reusable bags have been a scapegoat and panacea in an effort to curb the virus and in an effort to appear to be making efforts to curb the virus.

Front line workers need all the help they can get, and this is a risk mitigation strategy. This is why many chains, many HEALTH DEPARTMENTS, and many FOOD WORKERS UNIONS have asked for the reusable bags to be disallowed during COVID. Yes, there is no proof that reusable bags transmit COVID. But there is no proof reusable bags don’t transmit COVID either. At this point there are so many unknowns with COVID. Also reusable bags do transmit eColi and various other germs and it is best at this point in the middle of a pandemic to help these front line workers as much as possible by not forcing them to be exposed to any more germs than they already are being exposed to. That means no reusable bag contact by the cashier. Also if reusable bags are a risk to the front-line worker during COVID they are a risk during any virus, like the annual flu season. Overall, in working in stores in the past, I always found the occasional reusable bag I was provided… Read more »
4
|
-2
-   Share

Another intrusion by our government to force stores to follow rules for using plastic bags, and I’m for choice. Customers are not going to bring their own bags in, and what about tourists who don’t need the hassle at stores who can not provide them with free cloth bags for their vacation stay? People use plastic bags for small wastebaskets, used diapers, bringing goods to their family for dinners etc., and this overreach by NJ is typical of politicians who think they know better, which is laughable. The solution is for companies to create biodegradable plant-based or recycled bags for retailers. Until you actually run a retail store day in and day out, you have no clue how difficult it is to deal with these mandates and I, for one, do not need another law banning plastic bags.

I am a hypocrite. I am a huge supporter of banning plastic bags. It was supposed to happen in NYC back in March. Because of COVID-19 it was postponed.

I know from my experiences in France and China that if you at minimum charge people for the use of plastic bags, almost all shoppers bring their own. I would expect the same change in behavior in the U.S., whether a charge or a ban.

One would think that as a huge supporter of a ban, I would regularly bring my own bags. I do not. And I even ask for a bag when I have one item that I could just carry. Why? I use them for trash. Maybe I am just cheap?

Let’s start with the following disclaimer: I have no medical expertise and therefore I am not qualified to discuss the implications of single-use versus multi-use bags during this pandemic.

My concern is not the use of single-use bags in general but the lack of locations to recycle them and, if not more importantly, people’s willingness to put in the effort to do so (some we do recycle in our household). Unfortunately, while the former issue can be addressed with reasonable ease, the latter cannot. The only alternative is to ban the use of single-use bags.

What about the many people who use those single use plastic bags a second time (then they do get thrown away) for pet waste, trash, light yard waste, to take lunch out with them, etc.? For me when in CA I can actually use the small plastic produce bags for things like the pet waste or lunch. But for the yard waste or trash, now that means I need to buy trash bags (which are — plastic). And that trash bag costs me money, gets used exactly one time for the trash, and is not recycled. The single use plastic bag is not single use for many. This causes them to just have to buy other plastic bags (like trash bags) which are truly single use.

As far as I am aware there have been no confirmed cases of COVID-19 via surface contamination, so going back to reusable bags probably makes sense.

PAPER takeout bags? For the many areas that still restrict indoor dining — or even if you just want takeout somewhere that doesn’t — what are you supposed to do? Sorry folks, whatever the merits of proscribing plastic bags, this particular law gets my thumbs down.

Braintrust
"We have a Catch-22 here."