No sweat. Target’s activewear brand’s sales move past $1B 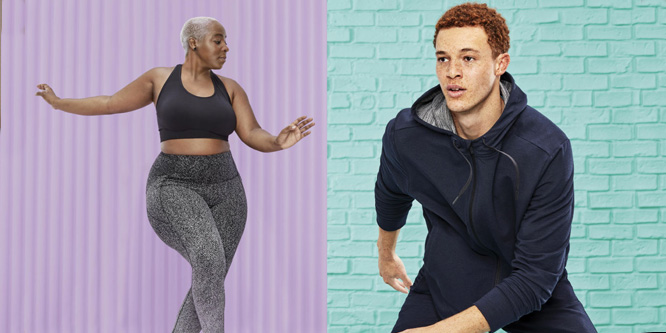 Target’s own brands have traditionally been a point of difference between the retailer and its rivals. Until recently, Target claimed to have nine $1 billion own brands under its roof. That number has risen to 10 as Target announced that its All in Motion activewear brand for the family has joined the club.

“In its first year, All in Motion stood out in the marketplace, providing guests incredible activewear and sporting goods for whatever their daily lives bring — at an only-at-Target value,” said Jill Sando, executive vice president and chief merchandising officer, style and owned brands, Target, in a statement.

The introduction of All in Motion proved prescient for Target, which ended its relationship with Champion in January of last year. That company’s C9 activewear brand had been a Target exclusive going back to 2004. The decision by Target to discontinue C9 and roll out its own line of activewear was part of a larger strategy to retire other exclusive and house brands and replace them with new on-trend lines.

It’s hard to imagine any brand being any more on trend than an activewear line debuted just as millions of Americans were ditching their work clothes for something way more comfortable during the pandemic.

Target said that leggings, sports bras and yoga mats have been big sellers for All in Motion. Versatile clothing made from ”soft and cozy fabrics” has proven the right fit for consumers in a wide variety of activities inside and outside of the home and, yes, for exercising too.

The retailer said it has been very attentive to the more than 15,000 product reviews left on the line since it rolled out. Target said its team has read “every single” one and has used that information as it expands the All in Motion brand, such as its new Seamless collection. Items in the line, including leggings, t-shirts and other items, are promoted as being the quality equivalent of premium activewear brands but at Target prices.

“They’ve basically been going around saying, ‘Who does it best and who does it worst?’” said Ms. Widlitz. “‘Let’s replicate what the winners are doing and take on the losers and do it better.’”

DISCUSSION QUESTIONS: Is Target’s approach to creating, merchandising and marketing its  own brand soft goods different from what its retail rivals do? How do you explain why so many consumers gravitate to Target’s own brands while other retailers seem unable to create the same level of enthusiasm?

Please practice The RetailWire Golden Rule when submitting your comments.
Braintrust
"Launching an attractive and accessible brand at a time when gyms are closed or restricted, and offices are closed, turned out beautifully."

"Target has been very careful to cultivate data-driven private label brands with quality packaging and design that is clean and attractive to their customer base."

"It definitely helps that Target has a loyal customer base. But they also leverage reviews – meaning they actually listen to what their customers are saying..."

19 Comments on "No sweat. Target’s activewear brand’s sales move past $1B"

Target has been extremely successful in developing private label clothing brands because it has a loyal following and its merchandise is good quality and on trend. The focus to be on trend rather than trendy is the key to Target’s fashion brand success. Target carefully follows the macro trends in consumer shopping behaviors and designs products that are appealing to large segments. The merchandise has long life cycles as they are designs that aren’t trendy.

Target’s timing could not have been better. Launching an attractive and accessible brand at a time when gyms are closed or restricted, and offices are closed, turned out beautifully. Target’s customers know that they’re buying a quality product at a reasonable price. Brian Cornell seems to be doing everything right.

$1 billion in sales in the first year of launch is astounding, even considering the pandemic induced demand and already existing channels. I am sure industry practitioners will be looking closely to identify the success factors. Kudos to Target.

Target’s approach to developing brands is holistic and customer-centric, especially in apparel. They think about what their target market wants and how they live their lives and develop products accordingly. Moreover, they don’t just throw new brands onto the shop floor. They merchandise well by providing new fixtures and signage so that each brand has its own personality and handwriting. All in Motion is a case in point of this approach. And the correct approach has been further fueled by an interest in fitness apparel and products during the pandemic.

Once again, Target has listened to their customers and given them what they want – and more. Target has clearly figured out that aligning assortments and services (e.g. Target’s amazing curbside pickup program) to target customers’ needs, wants and values will drive short-term revenues and long-term loyalty. Kudos to Target for another successful, customer-centric program.

Private label brands are often seen as lower cost knockoffs. Target has been very careful to cultivate data-driven private label brands with quality packaging and design that is clean and attractive to their customer base. Once you couple this with good old in-store merchandising and limited edition marketing, it’s little wonder they’re able to do what others aren’t.

“Replicate and replace” is a foundational premise for private/ proprietary label. Target executes this strategy better than most. Let’s face it, C9 built the relationship with the customer for this niche of the business. “Replace” is exactly what happened. And Target did it superbly. They maintained or improved the quality. They executed terrific in-store shops. They studied and learned from the brand. Hitting $1 billion in sales so quickly is as much a compliment to C9 as it is to Target’s private label skills.

It definitely helps that Target has a loyal customer base. But they also leverage reviews – meaning they actually listen to what their customers are saying and create actionable ways to cater to their needs. This should be the golden nugget for any customer-centric retailer: start from the customer and work your way up, ensuring you stay on-trend, practice social listening, and gauge the competitive landscape.

Unlike activewear giants and discounters, All in Motion offers affordability without compromising quality and style. As more consumers turn to fitness during the pandemic, this new private brand is a smart, strategic addition to Target’s assortment.

Hits the bullseye – good one!

So far, so good. The non-store brands also only have themselves to blame. So many brands have shifted their advertising dollars into less effective ad options — like digital. Notice that Target continues to promote their brands on TV as well as through other channels.

Since 2000 I’ve seen this risk for brands — the vicious cycle of cutting advertising due to low margins only to end up with lower margins which means…more cutting of advertising. At this point, I don’t know why I would want Champion goods. So they’ve opened the opportunity for Target to step in with their own store brand.

Target’s success in the last few years has been because of great strategic leadership. They determined, as all retailers should, that the marketplace is not what they want it to be but what the shoppers want, perceive, and need.

After years of seeking silver bullets to solve their problems, they understood that there were no quick fixes and started to approach the business with a long term view.

Part of that long term view was understanding the meaning of “Target” to their loyal customers and why those customers continue to shop there. Then they took advantage of it. They are in touch in every way with their customers and they are agile enough to adjust and take advantage of changes in the environment and the customer needs.

But most of all, this would not be possible without the meaning and legacy of “Target.”

Target’s prowess in creating powerful owned brands in apparel has been decades in the making. C9, Merona, Mossimo, Mizrahi — it’s an impressive list. They are phenomenal at understanding their customers and the market. They have an outstanding team of designers and product development professionals who interpret trend and source products. They don’t rest on their laurels, they move quickly and more often than not, accurately. The accolades for All in Motion are well deserved. They are certainly timely and exactly on trend. BUT at the same time, I’m certain this line had been in development long before COVID-19. Solid strategic planning sets up success.

All in Motion product floor sets display a revved up basic program. Given Active is now the de-facto 24 hour, wear most anywhere, apparel. Target hit the mark with a vast array of sizes and newly colored basics presented as a shop-within-a-shop inside Target, featuring wide-open spaces leading to product discovery. A key factor in selling basic active apparel is fit and fabrication. Hopefully Target will not go the way of Old Navy, selling limp versions of active fabrications to keep price points low.

It’s still rare for a retailer with DNA rooted in multi-brand distribution to excel at design, sourcing and production as well. We see various levels of success such as private labels like INC and others. Target has not only managed to be incredibly successful, they always have their finger on the pulse of the zeitgeist. It’s amazing. Their trend watch and sentiment measurement is like none other. They are never late. Always ahead of the curve.

Target simply executes better, full stop. They have built consumer trust over the years, created a genuine cachet around their brand, and hit all the right trends at the right times. They are, if you will, as close to an “influencer” as a brick and mortar retailer can be. Their “secret sauce”? They pay respect to, and pay attention to, their customers. The rest is easy.

And as a Minnesotan, it’s always a shot of nostalgia for us to walk in and see the 1970s Dayton’s logo re-purposed for All in Motion. Outsiders think we’re a cold people but this gives us all the feels…

Even before COVID hit, the athleisure market had been on a tear with close to 10% YoY growth. COVID just accelerated that as many of us transformed from our traditional office garb to wearing sweats and hoodies. In fact, Gap just announced that they are essentially going to double their Athleta brand from $1 billion to $2 billion in revenue by 2023. But despite market forces being in their favor, Target’s execution is exemplary. They have mastered the knack of listening to the consumers, designing and merchandising products well and keeping the seasonal freshness in their offerings that rival top apparel brands. Kudos to them!

Strategically, this is not a vastly different approach from Walmart’s recent launch of Free Assembly. More and more, retailers continue to bring key initiatives in-house. In this case, Target is smart to focus on something the whole world needs right now, comfortable activewear for the (let’s be honest) less active home-bound workforce. Of course this would pay dividends, it’s relevant, affordable, accessible and fashionable. Unlike Walmart, Target may not have to work quite as hard to convince consumers to associate fashionable apparel with their brand. This may give Target the competitive advantage over other retailers who are undertaking the same strategy.

Braintrust
"Launching an attractive and accessible brand at a time when gyms are closed or restricted, and offices are closed, turned out beautifully."

"Target has been very careful to cultivate data-driven private label brands with quality packaging and design that is clean and attractive to their customer base."

"It definitely helps that Target has a loyal customer base. But they also leverage reviews – meaning they actually listen to what their customers are saying..."