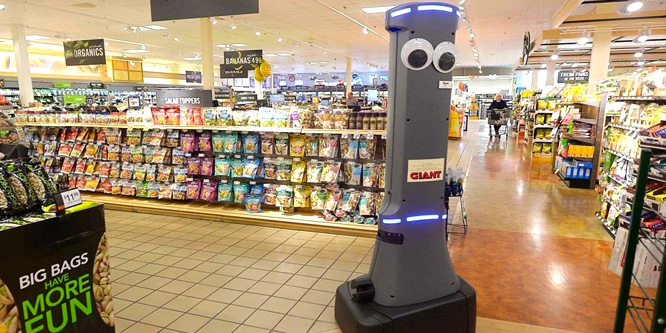 At the NRF Big Show in New York on Monday, Nick Bertram, president at Giant Foods, revealed that the supermarket chain is rolling out “Marty,” a 6’3” robotic assistant, to all 172 of its stores.

Nearly 500 robots will be deployed out across Giant Foods and Stop & Shop, also owned by Ahold Delhaize, in what Steven Platt, research director, Retail Analytics Council, who also participated in the session, ranked as the largest robotics rollout at retail in the world.

Marty will be initially used to identify hazards, such as liquid, powder and bulk food item spills, and alert associates to do clean-ups. Planogram compliance and in-stock monitoring is expected next.

At the NRF session, Mr. Bertram said a surprise in the pilot of the robot was that customers weren’t intimated, but “actually loved” the robot. Including “googly eyes” added a “little bit more fun” to the robot’s appearance. He said, “[Marty] did freak some of them out, but especially children found that having a live robot in a supermarket is exciting.”

Marty is appearing in selfies on social media.

Another possible hurdle of having robots working in public is the perception that they are replacing human workers. Giant worked to educate associates on understanding robotics’ role in reducing redundant and mundane tasks in order to help them “really focus on exceptional customer engagement.”

Giant also found the public has a “higher perception” of the net benefits of robotics than many assume.

Finally, Mr. Bertam also called out the ROI of rolling out a robot for spill alerts. He said the initial focus was on “more practical” solutions, but believes additional applications will prove out the ROI. He is “most excited” about the second phase that adds planograms and in-stock maintenance, as out-of-stocks are still a primary shopper complaint. Costs are also coming down as robotics and artificial intelligence are adopted.

“We as a retail industry have to take advantage of this exponential growth in technology and not be avoiding it,” said Mr. Bertram.

The rollout comes as a number of grocery chains including Schnucks and others are testing robots that scan shelves for out-of-stocks. Last fall, Walmart introduced a robot for scrubbing floors.

Please practice The RetailWire Golden Rule when submitting your comments.
Braintrust
"This is only the start. Over time, I expect these robots will be used for many other tasks including product location and even basic customer service."

"Setting aside what the robot might be able to do, what I see first is Marty’s big “foot print.” Grocery stores are already hazardous..."

"Are so many supermarkets around the country awash with broken glass and sauces on the floor of supermarket aisles that a robot army is called for?"

14 Comments on "NRF: Roving robots report for work at all Giant Foods’ stores"

The biggest barrier to seeing robots on the selling floor in the short-term will be the cost to deploy and maintain this equipment. As Giant Foods is seeing, there are benefits to being the first to roll out this type of technology. The novelty factor and PR are definitely short-term wins. Utilizing robot technology for spill detection and spotting stock-outs are good, practical uses for this technology. This is only the start. Over time, I expect these robots will be used for many other tasks including product location and even basic customer service.

6’3″ is too tall. Shoppers will not like being looked down upon.

We are at the very beginning of the curve with what robotics will be able to accomplish. We will look back at the first tasks like identifying spills and laugh. Once the out-of-stock issue is solved, including ordering, there will be many more assignments that make sense like helping shoppers find a certain item or asking the robot for suggestions on meal solutions and many more.

If retailers see the robots’ ability to do the tasks as mentioned, and more in the future, while it frees associates to work with customers, this type of interaction can transform the floor to a delightful, service-centric experience for customers. That is as long as retail doesn’t see future robotics as eliminating associates to minimize cost. That would birth lower service levels and customer satisfaction will drop dramatically.

As in the deployment of any new technology the initial barriers are always cost and functionality. If robots are going to be effective long-term they need to add some functions to justify the investment. But assuming those hurdles are cleared, I’d say the next issue centers around associates’ concerns that they are being “replaced,” rather than being given another tool to work with. So, as in so many things, education is the key.

Cost, cost, cost. Ideas don’t get to see the light of day without funding. Securing a budget does depend on how well (creative) you can craft an ROI. This takes into consideration working assumptions on how associates, shoppers, and functionality (use cases) will be adopted. So the initial wave of robots hitting the stores is more on a test basis but to read about a battalion of 500 robots takes conviction and commitment.

I view the appointment of Mr. Farhan Siddiqi as Chief Digital Officer and member of the Executive Committee at Ahold as a sign of what we should expect from the company in the future. Mr. Siddiqi is expected to drive digital transformation and innovation across Ahold Delhaize with a focus on loyalty, data analytics, and personalization.

The greatest potential is shifting of time consuming non-customer facing interactions to robots so store associates can focus on customer service.

Robots in some supermarkets are a novelty and cool nowadays, but it will be instructive to see if they will roll out to more stores and become a permanent addition to a store’s staff. I see many negatives and issues with robots. I laugh when I read that robots will at first be used to detect spills and breakages. Are so many supermarkets around the country awash with broken glass and sauces on the floor of supermarket aisles that a robot army is called for? Robots to detect out-of-stocks and mis-priced products sounds like a good idea. They will replace workers who have done this before, but, hey, these workers will be given other more important tasks in the store. So the grocer — already operating with thin margins and facing considerable retail competition — is adding perhaps considerable costs and nobody will be laid off? Huh? Then there are issues like robot maintenance, vandalism from pranksters, aisle congestion, intimidation of the elderly, etc. Technology is great when it makes sense. But I say invest… Read more »
1
|
0
-   Share

Whenever a company merges with another company, or new technology is unveiled, you always hear this will not affect anyone’s job. That part of this rollout is the piece I do not believe. Certainly some jobs and some hours are going to be lost. Once the rollout has been deemed a success, the next step will be to see how costs can be reduced to offset the expenses of the robot. Recent and past history tells you this is going to happen. Given that, IF the robots are going to be used to initiate better customer interaction, this will be a major plus for most grocery chains, including Giant. My concern here is that big word “IF.”

Using the robots in the Giant stores is doing exactly what it’s supposed to do and more. First, the robot has a job, and it sounds like he/she/it is meeting expectations on that front. Second, the customers are enjoying the experience. It’s new, cool, high-tech, etc. For many, this is the first experience watching a robot in action. Third, and this is a big one, it is getting them publicity. That can be well worth the cost of putting these robots to work.

It’s new and exciting. We’re watching the future unfold before our eyes. And, five years from now, when robots are everywhere, we’ll think, “Remember that first robot we saw at the Giant store? How cool was that!”

Setting aside what the robot might be able to do, what I see first is Marty’s big “foot print.” Grocery stores are already hazardous with all the shopping carts moving in all directions. I see a lot of chaos to overcome. That’s my 2 cents.

Agree with Lee, there will be a lot of chaos to overcome. Not to mention, we’re giving our robot overlords direct access to our food supply.

In all seriousness, stand-alone robots are part of the store footprint. If they’re able to monetize the space the machine requires, it may work. I think robo-functionality built into the grocery experience we are already accustomed to (like smart carts and price scanners) will be a more seamless experience with less of an impact to a store’s already crowded footprint.

Shoppers love having real people help them in the store. Why rush into robots? Because we can?

At this point, I think tech companies are building robots because they can (like most consumer IoT technology). And that means they don’t do much for stores.

There is potential, but I’m not hearing smart discussion about it yet.

That said, let’s not forget the Deming observation: “The greatest waste in America is failure to use the abilities of people.”

Robot discussions almost always decay into potential ways that managers can avoid their real jobs of having to manage people. I’ve written more extensively about this in a post entitled “Are Robots a Way to Avoid Critical Business Questions?“

Additional note: “Managers are choosing to believe that maybe, finally, robots will take human foibles out of the equation while ignoring that they will remove human brilliance at the same time.”

This is an early implementation. Let us face facts. Eventually there will only be robots and they will replace associates. I do not know what all these people are going to do once robots have taken all their jobs.

The future is rapidly approaching and companies will save money. We need to think of the personnel expense. Someone has to think about that because money will be saved, yet what of the humans?

Hopefully we will be able to solve this and have robots both benefit us and save money, but will we need work to make money to buy the food the robots are selling?

Braintrust
"This is only the start. Over time, I expect these robots will be used for many other tasks including product location and even basic customer service."

"Setting aside what the robot might be able to do, what I see first is Marty’s big “foot print.” Grocery stores are already hazardous..."

"Are so many supermarkets around the country awash with broken glass and sauces on the floor of supermarket aisles that a robot army is called for?"