Race and security meet in lawsuit brought against Walmart 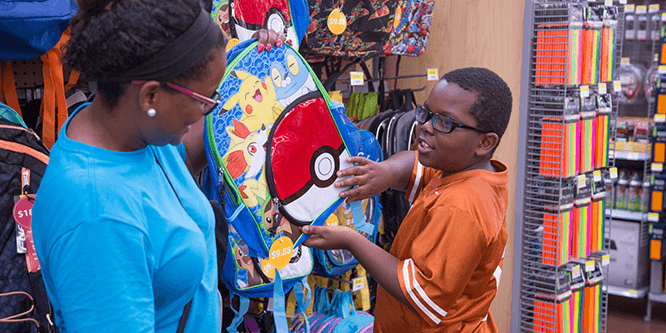 Walmart’s decision to lock up beauty products designed for African-Americans behind a glass case is an act of racial discrimination, according to a woman who is suing the chain.

Essie Grundy, who has brought the suit against the retailer, said that items she wished to purchase at a Walmart in Perris, CA required that she find a store associate to open a case. On one of her trips to the store, she sought to purchase a comb that sold for 48 cents. The associate who unlocked the case for her said Ms. Grundy would need to go to the register to pay for the item before she could continue her shopping.

“I was angry, I was sad, frustrated and humiliated all at the same time,” she told The New York Times in describing her experience.

For its part, Walmart says that security protocols are set up on a store-by-store basis and that items secured in the Perris location are different than those locked up in others.

Shoplifting is a major issue for retailers running businesses on low margins and with little room for error. According to the National Retail Federation (NRF) and University of Florida’s National Retail Security Survey, the average loss per shoplifting incident is $798.48. Theft, accounts for 1.44 percent of all retail sales.

According to the survey, nearly half of all retailers reported increases in losses due to shrink last year. Shoplifting/organized retail crime was cited by 36.5 percent as the most prominent factor in those increases.

“The seriousness of retail theft is much greater than most customers realize,” said Richard Hollinger, a University of Florida criminology professor and the lead author of the NRF report, last year. “When criminals steal from retailers, consumers pay higher prices, the safety of innocent employees can be compromised and shoppers looking for popular merchandise often cannot find it.”

DISCUSSION QUESTIONS: Do retailers need to do a better job in explaining store security practices to customers? What is your take on the lawsuit being brought against Walmart?

Please practice The RetailWire Golden Rule when submitting your comments.
Braintrust
"Walmart’s situation will depend on how they decide what is locked up in each location."

"...stores have a right to lock up items that get stolen. As long as it’s handled objectively and evenhandedly I don’t see an issue."

"Walmart’s archaic method of keeping low-priced goods behind lock and key doesn’t exactly establish them as a leader in their field."

I was quite startled to realize the economic scope of theft as an overall percent of retail sales. It’s really a huge issue. Do retailers have any choice but to put commonly stolen goods under lock and key? I think not.

I had the same experience in CVS in Sacramento. I wanted a shaving razor. It was locked up. I found it annoying, but I didn’t scream sexism or threaten to take CVS to court.

Bottom line: stores have a right to lock up items that get stolen. As long as it’s handled objectively and evenhandedly I don’t see an issue.

Yikes, Walmart. To determine if Mrs. Grundy’s claims had merit, I’d need to see all of the products which were behind lock and key at that particular location, as well as whether everyone was told they need to purchase an item before they can continue their shopping. We don’t have enough information here to make a case.

However, in a world of Amazon Go and home delivery, Walmart’s archaic method of keeping low-priced goods behind lock and key doesn’t exactly establish them as a leader in their field. Can you say “PR nightmare?” Whatever the results of the lawsuit, this doesn’t look good for Walmart.

Agreed, Jasmine. Locking up a 48 cent comb seems unusual, and making the customer go pay for it before returning to shop is equally unusual. At least I hope it is unusual.

The key point here should be to lock up these items EQUALLY and not just by ethnic category. Office suppliers lock all ink cartridges, drug chains lock certain high-value items, but these are done by value, not by ethnicity. That is the way to remove the bias from the decision to protect against thieves.

Stores do lock up items based on location. The stores near me including Walgreens have varying items locked up based on their specific stores. I believe it is pretty common practice.
Walmart’s situation will depend on how they decide what is locked up in each location.

I recently went to Walmart to buy a pair of tube socks. Almost 100 percent of the socks had a perforated hole in the package and one pair of socks were taken out. Not one or two, all of them. The same with underwear, just three in a five-pack with a hole in the package.

Walmart and likely other stores have a bigger-picture retail theft problem they need to address.

Theft is a very serious problem caused by a tiny portion of shoppers. Security procedures based on “averages” risk offending the vast majority of shoppers within ANY segment of their market.

Certainly it’s easy to criticize this in retrospect. Yet every retailer needs to guide all security decisions based on applying them across all shoppers. Walmart should have been smarter.

Explaining security practices to shoppers? I don’t think that’s a simple answer. Communication on a sensitive topic like security goes bad extremely fast. Instead, retailers should focus on the optics: Does this security look a.) fair, b.) effective and c.) necessary?

What irritates shoppers the most is security that appears silly. We need to give shoppers credit for understanding there’s a problem. And credit for having enough security encounters at this point to judge what works.

Retailers have every right to protect their wares but the treatment of this particular customer in these circumstances sounds, at face value, disgraceful! While stores operate on a location basis, I think some responsibility needs to be taken by Walmart on the leeway they are giving individual outlets to racially profile.

This one is strange because I can see certain items that have a high shrink rate and high value being secured like razor blades or medication. I have seen strange things being secured, but in this case securing combs doesn’t make sense unless they just locked down the entire facing from a single brand owned shelf? Will be interesting to see the data behind that decision, hopefully there is one. Even if the data backs it up, it is still a PR nightmare….

Retailers have seldom if ever been at the forefront of what might be called “enlightened” social policies, and insofar as they try to make money by selling things, it’s probably unrealistic to expect that they ever will be.

So what’s the difference between “reasonable” and “unreasonable” and who should draw the line? Based on this example, I’m guessing it probably shouldn’t be someone at the local level. And if a retailer can only operate by treating people like children — naughty children at that — it’s dubious that in can last at that location for long.

This is a common occurrence in many Walmart stores where theft is an issue. Usually more expensive and often stolen items are kept under lock and key. This is not racially motivated since razors and cosmetics are frequently the items that are stolen.

I believe that the majority of consumers understand when certain regulated or high-priced items are secured … but a 48 cent comb?!

The grim reality is that various store market areas are not necessarily in the best social-economic areas. I know this store and the surrounding area, and it is not what I would call safe. A nearby Walmart even has on-going issues with gang members bringing in guns and threatening associates and store management. In this case, I would guess that store management and district management analyzed physical inventory results and identified several categories of products that needed to be locked down. This is a tough decision, as this action greatly reduces sales and increases store labor needed to service these cases when customers need products from these locked cases. Obviously, it offends those customers with a stronger moral compass, but they need seek the right target of their outrage, which is not the retailer who is struggling for profitability in a high theft area.

Braintrust
"Walmart’s situation will depend on how they decide what is locked up in each location."

"...stores have a right to lock up items that get stolen. As long as it’s handled objectively and evenhandedly I don’t see an issue."

"Walmart’s archaic method of keeping low-priced goods behind lock and key doesn’t exactly establish them as a leader in their field."