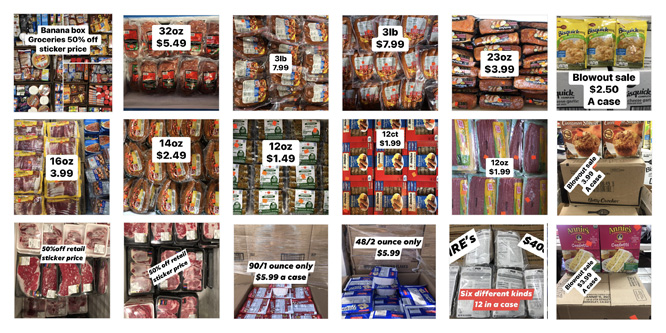 Consumer packaged goods (CPG) that are far out of season, discontinued, well past their sell-by date or in beaten-up packaging usually end up marked “unsellable” by grocers and taken off the shelves. But in an inflationary era when customers are increasingly strapped for cash and hunting for discounts, a category of ultra-low-priced grocers that sell the unsellable is growing in popularity.

Salvage stores, once a haven for deep discount seekers and customers who enjoy discovering cheap oddities, are enjoying an influx of mainstream shopper traffic, according to The Seattle Times. Such stores, with a hodgepodge selection accumulated through various sources and relationships with suppliers, provide not just deep discounts, but a treasure hunt element for curious shoppers and an environmental proposition for those who care about reducing food waste.

The stores have even grabbed the attention of food bloggers like Maggie Kilpatrick, who suffers from celiac and was able to find a surprising array of gluten-free products in a salvage store in her hometown of Minneapolis.

Shopping at salvage stores was up eight percent year-over-year for the first part of 2022, with some store managers throughout the nation reporting double-digit increases in sales.

The increase in the popularity of salvage stores comes as other, more mainstream deep discount retailers have likewise experienced a boom in business due to inflation.

Both Dollar General and Dollar Tree showed year-over-year gains in their first-quarter earnings reports in May of this year.

Data from Kantar and a separate study from Symphony RetailAI confirm that customers are trading down to dollar stores from conventional grocery stores.

At the same time, once spartan, no-frills value retailers have been upgrading their store experience and product lines. This is a trend that began well before the pandemic and the inflation of the past year.

For instance, while Aldi remains a value grocer, several years ago it began moving its look and feel upmarket to court a more affluent, but still value-oriented, shopper. The chain began stocking some healthier foods, produce and even organics, though it resolved to keep its prices low.

DISCUSSION QUESTIONS: Do you see salvage stores continuing to grow in popularity? Do you expect mainstream grocers to change their protocols for “unsellable” CPG items if inflation persists?

Please practice The RetailWire Golden Rule when submitting your comments.
Braintrust
"Salvage stores are now moving in to take up the gap where dollar stores used to be."

Salvage stores will continue to grow in popularity. Current economic conditions are still choppy, and consumers are looking to stretch their dollars. Salvage stores, positioned a step beneath dollar stores, offer yet another channel for consumers to find bargains. Most of the mainstream grocers have been through inflationary periods before and while they may make some merchandise changes as a result of the current economic conditions, I don’t believe these will result in any long-term changes.

Dollar stores have moved up in terms of offer and target market. Salvage stores are now moving in to take up the gap where dollar stores used to be. Expect this segment to grow and gain scale, no matter which direction inflation goes.

Now that more shoppers have discovered salvage stores, I suspect they are here to stay, because people love to be surprised and delighted when they shop. And what better place to find surprises than in a salvage shop? Once again, the “treasure hunt” appears to be a magnet for shoppers. Maybe it’s time we look for ways to integrate that experience into more than off-price stores.

My grocer has an oft-visited value rack where customers can find sliced boxes and dented cans. It’s a favorite.

Salvage stores have always been with us, and they probably always will be. In lean times they become more popular but, to date, their existence is largely dependent on the percentage of consumers in a trading area that simply can’t afford regular supermarket prices. Will more affluent customers trade down during an inflation? Sure, some percentage will. Will some percentage of those shoppers continue to shop salvage outlets after a recession/inflation pass? Of course. But if I was looking for a hot new “trend,” this wouldn’t be it.

I’m with you that this won’t be a hot new trend, and I get selling beat-up packaging and dented cans, but we’re talking food here. Are items that are well past their sell-by date really safe to eat? And for how long?

Dollar stores gained awareness and acceptance as a place to shop as the cost of traditional food stores’ prices rose. The same is true for salvage stores. The longer food inflation continues, the less likely these customers are to return to their former shopping habits.

Since the source of these items is inconsistent, they don’t fit easily into mainstream retailers’ merchandising process.

Odd lot and salvage stores can pick up most of the slack here. The fringe benefit is waste-reduction. Better than the landfill.

I suspect salvage store shopping will continue to be a side-event embraced by certain shoppers (a minor share), but not embraced by most. We’ve seen in the past that consumers will dabble in testing things like this and return to their previous methods after seeing what limitations these stores offer.

That said, they are a serious value for those who rely heavily on them, so they likely have a small long-term market.

Certainly one can foresee a growth opportunity here — it’s hard to not, see one — but it’s equally easy to see the problem: the size of the market is limited by supply issues. Essentially, the sector deals in “mistakes,” and industry is always trying to reduce mistakes. So I can see it growing from 2% to 3 or 4% of sales (or whatever the real numbers are) but unlike dollar stores, or deep-discounters or online sales or … whatever it is one talks about as “threats” to conventional retail, the number is never going to be, say, 20%.

Whether it’s for rare/specialty items or filling the pantry, salvage stores are filling a gap in the market for consumers at both ends of the spectrum.

Yes, we will continue to see the increase of popularity in salvage stores. Inflationary times like we are experiencing as a nation, finds that everyone is looking for ways to save more money, and to “make” more money every day. This includes purchasing items that are cosmetically less than perfect for substantial savings, which is what salvage stores are all about. Follow the gross sales, and profits, quarter after quarter, and each of these companies’ success during a down market, cannot be ignored.

There is an element of fun for shoppers who enter a store that offers “mystery merchandise.” Coupled with the rational need to save money on food and household goods, the salvage store may be increasing in relevance. I’d expect these formats may see benefits to amping up the experience by adding more visual cues to attract shoppers to various categories and deliver some playful messages.

Braintrust
"Salvage stores are now moving in to take up the gap where dollar stores used to be."