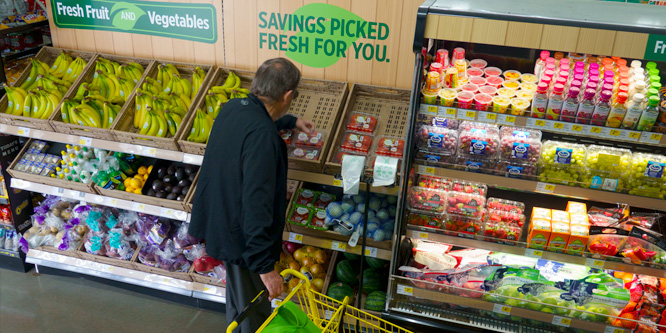 Will runaway inflation really drive consumers to trade down from conventional supermarkets to dollar stores for groceries?

A recent study by Symphony RetailAI confirms that many of the most price-sensitive consumers are shopping more frequently at dollar stores as they’ve been unable to make ends meet by switching to cheaper brands or smaller sizes at regular supermarkets.

For some, that means Dollar General, which has hundreds of DG Markets with expanded perishables offerings and expects to install another 65,000 cooler doors this year.

Neil Saunders, managing director, retail, at GlobalData, says middle-income shoppers are already shifting a bigger share of their spending to the dollar channel. Beyond the obvious savings, the appeal is twofold, he explains: “First, the one-dimensional nature of the shop helps people spend less. Second, for many, especially in rural areas, the dollar store is the closest option, so it saves them gas money compared to driving further afield to Walmart or another supermarket.”

One of the knocks against dollar stores, especially in food deserts where they’re the only game in town, is that they offer few healthy choices. Dollar General’s DG Fresh self-distribution initiative is working to combat that narrative.

Dollar stores also have a reputation for unkempt aisles and understocked shelves that may indicate they’re looking for too many savings on labor. Supermarkets are also well ahead on delivery, loyalty programs and electronic communication.

Still, expanded frozen and refrigerated assortment could help dollar stores hang on to new shoppers attracted by the low prices whose situations improve with the economy. During the 2008-2009 recession, explains Mr. Johnstone, “Dollar stores did good gaining shoppers but not retaining them once it was over. Back then, they only had two key weapons, convenience and pricing, which were great, but not enough in the absence of a recession. But the business model has changed since then with the addition of frozen and fresh. … It’s a much more robust offer.”

DISCUSSION QUESTIONS: Are dollar stores well positioned to grab grocery market share in the coming months? What further changes may be necessary for dollar stores to improve retention among customers that are currently trading down?

Please practice The RetailWire Golden Rule when submitting your comments.
Braintrust
"This is an opportunity for the dollar channel to up its game and capture traditional grocery market share. But it will need to make changes beyond just adding coolers."

"Dollar stores have become everyday destinations and as soon as they overcome some of the operational challenges often attributed to this channel..."

The rising cost of food is certainly driving more consumers to allocate more of their grocery budget to dollar stores. It is a good opportunity for dollar stores and other discount grocery stores, like Aldi, to become more of a regular destination for consumers’ grocery list. The challenge for dollar stores is to expand their grocery assortment to capture a larger share of consumers’ grocery budget and have enough product breadth on food staples to make it worth the trip.

This is an opportunity for the dollar channel to up its game and capture traditional grocery market share. But it will need to make changes beyond just adding coolers.

Dollar stores are well positioned. Savings during a time of pressure on household incomes is an obvious reason. However the convenience factor – they are super close destinations in more rural areas – is an often overlooked reason why people use dollar stores. The improvements made to the fresh and frozen ranges, especially at Dollar General, is also helping them to push up share of wallet and drive traffic.

The convenience factor is both the promise and also the threat for dollar stores – anything they can do for fresh and frozen food logistics can be implemented at c-stores, which are even more embedded in neighborhoods and have more frequent visits, especially in rural areas. Food assortment and presentation in a Kwik Trip or Wawa or Buc-ees, for instance, is already light years ahead of DG and will keep accelerating.

In urban and suburban areas this is partly true, and maybe it is also true for some rural areas in parts of the country. However none of those players has anywhere near the reach of dollar stores. Dollar General alone has 18,356 stores in the U.S. That dramatically exceeds the reach of any convenience player and it means they are in many locations where there is a dearth of other stores and/or where local gas station stores are small and expensive.

Dollar stores have become everyday destinations and as soon as they overcome some of the operational challenges often attributed to this channel (unkept aisles, out-of-stocks, unreliable inventories, and outdated items), they will take a big bite out of the grocery sector. In particular, I’m impressed with the way Dollar General is fueling their business growth and paying attention to underserved markets across the country.

The question is not IF dollar stores can overcome their operational issues and some misguided reputation issues, but rather WHEN this will occur.

The dollar store reputation and value proposition is about low prices. As dollar stores expand their offerings, and their price points, they should still stay in their lane. It’s the low price strategy that got them invited to “the dance.” That’s what is going to keep them there.

If the dollar stores are able to establish credibility with consumers in produce and fresh products, I believe they have a really good chance of taking market share away from traditional grocers. To do so they need to be able to manage quality and, given their margins, shrink from wastage. My experience so far is that they have a ways to go to really earn that business. I would put a bigger bet on Aldi and Lidl’s models for now.

Great points, Gary. I’m definitely a fan of Aldi and the steps they have taken to earn trust and loyalty among shoppers. I don’t believe it is out of the question that the dollar store channel couldn’t take a page out of the Aldi game book. Time will tell (but the clock is ticking more quickly each day!).

Consumers are more price conscious than ever. As long as dollar stores expand their assortments and localize the product mix, customers will keep shopping (healthy options or not).

The dollar store business model is built for this moment. With the relentless inflationary pressures and rising operational costs, consumers feel the pain when they check out of their local and national grocery locations. The dollar stores, along with the hard discounters Lidl and ALDI, are well positioned to meet the needs of the increased foot traffic that will be coming their way.

There will be inherent challenges for the dollar store sector to adjust its operating model to increase the depth and breadth of fresh produce, prepared foods, and frozen and dairy products. In addition, there is a distinct opportunity to have exclusive everyday low-price offers, an increased private label assortment, and other everyday grocery staples that have become increasingly expensive.

Are dollar stores well positioned to grab grocery market share in the coming months? Most certainly. Their competitiveness accelerated when customers found gas a at better prices, and thus walked into the store. In these stores it is important to be in stock with price appeal. Pretty product presentations? Not so much. These stores are opening a path for loyal customers in this economic environment.

Dollar stores are seeing the same cost increases from the CPG companies that regular grocery stores are seeing. I don’t know how much more value they can offer, other than having similar private label/house brand offerings, and they don’t have the space to do that. Perishables are going to continue to be high due to gasoline surcharges now being added to costs. They definitely can be an alternative, but I don’t see them being a total shop destination.

No doubt the shift that we saw during the last recession is happening again. The primary difference is that dollar stores today are beginning to look more like traditional supermarkets, with the addition of produce, meats, and frozen and refrigerated sections. According to the latest data a family of four is now spending almost $500 more for groceries now than a year ago. Extreme value retailers, which is the category capturing dollar stores, attract not only customers who need to save money but also customers who like to save money.

This is likely equal parts inflation as it is convenience. Dollar stores have massive store counts, and are often in more rural areas where they’re the only option. With gas prices running high, why travel the extra mile to the larger grocer if you can cover the essentials in one destination?

There’s a cultural disconnect here, in my view.

Dollar General, as well as C-stores, which we’re not talking about as much in this article — ranging from Casey’s to QuikTrip to Wawa — have been moving into prepared and, in some cases, fresh food for YEARS.

Inflation may accelerate it, but the underlying trend is the bifurcation of high-end speciality items vs. staple commodities, and while many generalist grocers might get stuck in the messy middle, dollar stores and convenience stores are solving a real and unmet human need — inflation or no inflation.

~13-14 years ago, when Target doubled down on grocery, there were a number of critics. But they were thoughtful about the mix of private label and national brands, and they played to their strengths. As inflation (possibly) starts to level off, we’ll see this isn’t a trend where there’s going to be pull-back — there’s an underlying structural shift happening that’s been evident to people spending time in rural and even exurban communities for quite a while.

This could well be a large driver for dollar stores and similar. Especially so with consumers who are “time rich, cash poor” — they may buy what they can from Dollar stores and then fill “the gaps” from regular grocery stores.

A similar phenomena happened in the UK grocery market circa 2008-2009. Shoppers went to discount grocers (Aldi/Lidl) and then filled gaps at other supermarkets. This resulted in significant increase in overall wallet share for the discounters.

Braintrust
"This is an opportunity for the dollar channel to up its game and capture traditional grocery market share. But it will need to make changes beyond just adding coolers."

"Dollar stores have become everyday destinations and as soon as they overcome some of the operational challenges often attributed to this channel..."