When the going gets tough, consumers shop dollar stores 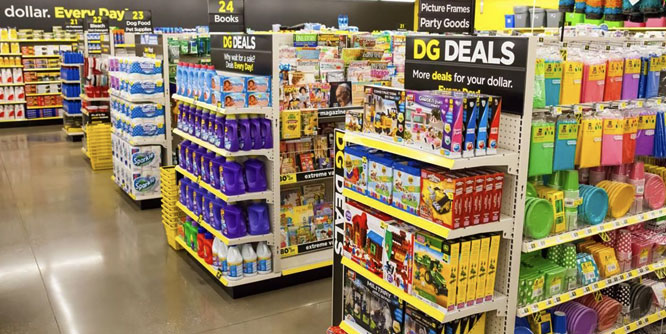 Dollar General reported a net sales increase of 4.2 percent. Same-store sales declined 0.1, compared to the same period last year when comps were up 17.1 percent on a two-year basis.

Todd Vasos, Dollar General CEO, said that his company’s value proposition is resonating with consumers looking to stretch their dollars.

He told analysts yesterday on Dollar General’s earnings call, “We’re already starting to see that our core customers start to shop more intentionally, and we’re starting to see that next tier of customers start to shop with us a little bit more as well. Matter of fact, when you look at the COVID customer, I would call it, the one that we attracted and now have retained since COVID, it is still running at or slightly above where we thought we would be right now, and that’s a little higher-end consumer.”

Dollar Tree reported a sales increase of 6.5 percent across its banners with same-store sales at its namesake chain up 11.2 percent and Family Dollar improving 2.8 percent year-over-year.

President and CEO Michael Witynski said that Dollar Tree’s decision announced last September to raise prices on select items from $1 to $1.25 and $1.50 didn’t negatively affect the chain’s performance and, in fact, contributed to “both sales and margin improvements.”

Dollar Tree’s quarter, in fact, was the strongest in the company’s history. The chain’s 11.2 percent same-store gain was its strongest in more than 20 years and its operating margin of 20.2 percent set a company record.

Moody’s retail analyst Mickey Chadha in an email to RetailWire cautioned that there will likely be an increase in consumers seeking value in lower margin consumables, and this will put more margin pressure on dollar chains. They “are in no position to afford higher prices and these companies will need to absorb most of the higher costs,” he wrote.

He did expect, however, that higher sales will offset some of the pressure on margins, leaving Dollar General and Dollar Tree with “a key advantage in a very challenging retail environment.”

DISCUSSION QUESTIONS: Do you agree that dollar stores will have to absorb most of the higher costs they face in 2022 instead of passing them on to consumers? Does Dollar Tree’s decision to raise prices suggest that dollar stores have more pricing flexibility than typically believed?

Please practice The RetailWire Golden Rule when submitting your comments.
Braintrust
" Dollar store pricing is an exercise in relativity. As long as they offer lower prices than mainstream retail, shoppers will continue to flock there."

"Dollar Tree’s price increases early in the inflation run up demonstrate that these markets have strong consumer demand and resiliency against price increases."

"Nope. Dollar stores should be able to increase prices and pass them onto consumers, though not with impunity."

15 Comments on "When the going gets tough, consumers shop dollar stores"

Like most retailers, dollar stores will likely absorb some, but not all of the higher costs they face. In an environment where all costs are rising, modest price increases can be sustained. Consumers will continue to buy at dollar stores despite the price increases because they will still be cheaper than the alternatives. Also, let’s not forget that Dollar Tree and other dollar store players have a significant store footprint with locations in markets where there are fewer alternatives. These current times were made for dollar stores.

Dollar store pricing is an exercise in relativity. As long as they offer lower prices than mainstream retail, shoppers will continue to flock there. For shoppers there is no other option.

Yes. These stores’ raison d’être is to cater to low-income demographics.

Consumers shop dollar stores because their prices are lower than what they pay for similar items at other formats. Keeping that pricing delta, real or perceived, will allow this channel to continue to grow during this inflationary period. It is not that the item is cheap, it is that it is cheaper.

The first thing I thought of was an old saying/joke: “We lose money on every sale, but make up for it in volume.” That doesn’t work. When costs rise, prices must rise appropriately. If price is the customer’s preference, as long as Dollar Tree has the lowest prices, the customer will continue to shop there.

The dollar store operating model is built for disrupted economies, inflationary periods, recessions, and cost of living increases. While Dollar Tree and other dollar stores have to also manage rising operational costs, the associated price increases are nominal compared to the balance of the retail industry.

The rapid expansion of the dollar store has in some cases made them the only option in town. We should fully expect the dollar store model to not only survive but thrive through these disruptive times.

I do not agree that these value retailers will need to absorb most of the higher costs. Dollar Tree’s price increases early in the inflation run up demonstrate that these markets have strong consumer demand and resiliency against price increases. Manufacturers and traditional retailers have already raised prices and in doing so have given consumers permission to return to dollar stores.

As inflation continues to impact consumer budgets and reduce brand loyalties even further, consumers will naturally shift into more affordable channels where they can stretch their budget on the items they care most about. The dollar channel has benefited from this – but even with this influx of consumer demand, they still need to be savvy and use a balanced, data-informed approach when deciding how to absorb or pass on cost increases to consumers. Fortunately, most indications show that they are doing precisely this and continuing to offer great value on the items consumers care most about while finding margin opportunities elsewhere. The marketplace is rapidly evolving and every retail segment needs the flexibility to respond accordingly but it is even more dire in a channel where the margins are pennies. Inflation doesn’t appear to be going away anytime soon and other higher priced retail segments should pay attention and make sure they are taking a balanced, consumer-centric approach to their pricing or even more consumers will shift to the dollar channel.

Dollar stores enjoy two value propositions that I would argue are equally important. Of course there’s pricing. Even with price increases, in this market they’re likely to still be the best deal in town. The other value prop is location. They are everywhere in rural America. They know their customers, they’ve saturated the market where their customers live and work. It is just easier to pop into the dollar store for high frequency items than to drive to the big box.

A couple of things are taking place here: dollar stores are good at keeping the shelves as full as possible, even if it means just pulling from the back to fill the front (fronting). It gives the impression the store has product. Yesterday I visited a Target store. The holes in fixture product presentations were incredibly bad. Just move product to the front and the impression changes.

Customers make judgements, and the impression that empty shelves give them is: “the store is not stocked, go somewhere else.” Give your store staff assignments and make sure the product looks inviting.

Congratulations to Dollar Tree and Dollar General. Yes they are in the right place right now with consumers looking for better value for their dollar but they have also taken the very bold step to move above the $1 price point on every item. Consumers have seen the rate of inflation rise so would not expect everything to remain at $1, but still see the chains as great value places to shop. Dollar Tree and Dollar General therefore gain with the sales and customer increases from other retailers but also have given themselves a lifeline by cracking the $1 price barrier once and for all enabling them to maintain margins. They are very efficient retailers, as all cut price retailers have to be, so they are better placed to absorb some of the cost increases than most but now they have the ability to pass on some of those as well. Great timing for a strategic move like this.

Nope. Dollar stores should be able to increase prices and pass them onto consumers, though not with impunity. Most if not all of the rest of the market will be increasing prices. These stores will remain the low price providers and hence the focus of attention for value-seeking consumers.

Dollar stores do have tremendous price flexibility, despite their lower costs. Pricing a gallon of detergent has different value than pricing a candy bar with different elasticity and price points. Price discrimination can allow dollar stores to improve price efficiency tremendously. The whole “Everything is $1” menu is a great marketing play, but it leaves money on the table.

It’s all about consumer perception. If consumers perceive the dollar stores to be significantly cheaper than other stores, they will shop there. That means there is room to raise prices to cover cost increases. But it doesn’t mean there is a lot of room! The idea of everything in the store being a dollar is a great marketing line, but that’s not where shoppers believe the value comes from. We will see price increases from these formats, but they’ll remain lower priced than the mainstream competition. And that’s what counts for shoppers.

I think it will be a split (as is true with many, or even most, retailers). That having been said, traditionally consumers respond to higher prices by trading down but as dollar stores are at the bottom, where would people go? They might stop buying altogether, but as these stores concentrate on essentials, again “where would people go?”

Due to inflation, people’s spending has risen substantially which makes it pretty obvious that a few of them would switch to more pocket-friendly alternatives such as dollar stores. Despite this, dollar stores already sell products at very lower prices, providing them with the flexibility to raise prices and it seems like a more sensible option as well. However, dealing with highly price elastic products poses a limit to the price increases. So later on reducing the quantity and product grammage will help them to maintain margins and profitability. Also, they have BACK TO SCHOOL season on the line, and dollar stores should definitely cash this opportunity on the table.

Braintrust
" Dollar store pricing is an exercise in relativity. As long as they offer lower prices than mainstream retail, shoppers will continue to flock there."

"Dollar Tree’s price increases early in the inflation run up demonstrate that these markets have strong consumer demand and resiliency against price increases."

"Nope. Dollar stores should be able to increase prices and pass them onto consumers, though not with impunity."