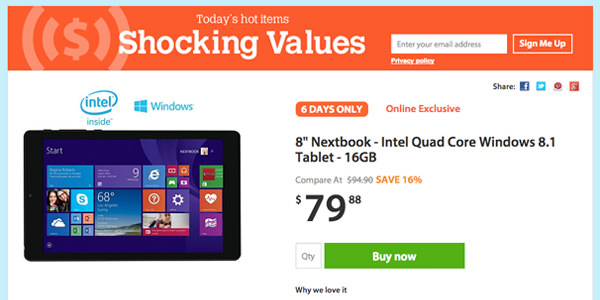 Are daily deals the answer Sam’s Club has been searching for in its efforts to gain a competitive advantage over Costco? Probably not, but Sam’s Shocking Values program provides at least one point of difference in the head-to-head competition between the warehouse club rivals.

"Our members consider each visit to their neighborhood club and SamsClub.com a treasure hunt for unexpected savings, and Shocking Values is a new extension of that experience," Jamie Iannone, president and CEO of Samsclub.com, said in a statement last month. "These daily deals increase the value of a Sam’s Club membership and provide savings that members won’t find anywhere else."

According to a report by The City Wire, Sam’s management is focused on delivering "newness" in its 650 clubs. The launch of the Shocking Values program comes on the heels of Club Pickup, which enables Sam’s members to place orders online and then pick them up at their local club. Neither Costco nor BJ’s Wholesale Club offer similar services.

"It will take time for the awareness of these changes to take hold, particularly with shoppers for whom Sam’s isn’t top-of-mind, but Sam’s deserves credit for driving continuous improvement," Carol Spieckerman, CEO of newmarketbuilders, told The City Wire.

Will Sam’s Club’s emphasis on newness help the retailer bridge the competitive divide with Costco? Do you see either Costco or BJ’s Wholesale Club also pursuing click & collect or daily deals in response to Sam’s initiatives?

Please practice The RetailWire Golden Rule when submitting your comments.
Braintrust
"Daily deals are the norm at a number of retailers already. I bought a fantastic sun dress at H&M yesterday for $4. Max is right, Sam’s needs a better-evolved identity to compete with Costco — crazy deals alone won’t cut it."

"Saving 16 percent is shocking? Seriously? Shocking to me would be 90 percent — I’d be shocked. There’s always someone cheaper. Always. Go back and try again."

"I hope "Shocking Values" isn’t retail’s version of a defibrillator. If so Mathews, Phibbs and others are right, it won’t ultimately work on patient Sam. Seems to me this is the struggle for differentiation and we keep coming back to the same old trough — price reduction."

It’s good to see Sam’s Club offering unique promotions. They needed to do something to become more competitive. That said, I don’t think a daily deal is going to woo customers from Costco. Both Costco and Sam’s need to refresh their in-store products and expand their online offerings to avoid becoming stale.

Does anyone think that Costco’s merchandising strategy is too staid? Is the problem with shopping at Costco that the stores all look the same all the time?

The real question here is whether a price-based (read: radical discounting) strategy will be effective. And I’m afraid my vote is that it won’t, simply because any pricing strategy can be copied, at least until the margins begin melting.

Sam’s Club is flailing around to establish a competitive point of difference. They would be better advised to think through their moves instead of jumping from initiative to initiative.

Will Costo and BJ’s copy Sam’s approach? Only if it works.

Daily deals are the norm at a number of retailers already. I bought a fantastic sun dress at H&M yesterday for $4.

Saving 16 percent is shocking? Seriously? Shocking to me would be 90 percent — I’d be shocked.

Go back and try again.

I hope “Shocking Values” isn’t retail’s version of a defibrillator. If so Mathews, Phibbs and others are right, it won’t ultimately work on patient Sam.

Seems to me this is the struggle for differentiation and we keep coming back to the same old trough — price reduction. The evasive answer is uniqueness IMHO. What product(s) do I love and can get only at Sam’s? Let me think …

I wonder how many more daily deals most consumers can handle. It seems that everything in my inbox is another daily deal. Looks like just another me-to program. They would be better served spending the money on providing better service.

Since it will take some time for the new treasure hunt idea to take hold, and since this approach copies Costco, it is hardly a point of differentiation. If Sam’s Club is trying to win more customers by copying competitors, why do the competitors need to respond?

This looks like a new approach for selling price. Companies that have found a way to bundle the services their customers want with the products they like at an acceptable price point will have little to fear. The least loyal customer base is the price shopper. Their conversion rate depends on how much they got burned by purchasing price only and little or nothing else matters to them. Sam’s may regret this in the form of lower quarterly profits from e-sales with little or no add-on or impulse sales.

Walmart/Sam’s Club is doing the only thing it knows how to do. That is, to attempt to beat value with price.

Carol’s observation may be right, but not quite right. Take a while? How about never?

In this market, the consumer has chosen value. Just check Costco’s record on same-store sales, then compare it to Sam’s.

It is as if yelling the same message louder or making it more annoying will somehow change the message.

So, you’ve got a deal? Well, its no big deal. One item and price will not change the experience and value proposition. The consumer has already calculated that equation and it came out not in your favor.

A daily deal here, a daily deal there. How many stores can we continually shop looking for the holy grail of deals? I did not read where the deals are advertised other than when you are in the store and happen to pass by. So maybe it is a matter of “hide and seek.” Good try Sam’s. Now back to the drawing board to figure out how to make it work.

Well, for the record, I am a Costco shopper. And part of their shtick is what’s here today may not be here tomorrow. So I don’t know how much room Sam’s has to really differentiate on that point. This model is ridiculously easy to copy, and both Costco and BJ’s have enough buying power to negotiate some deals with some vendors. My prediction: either this will fizzle out on Sam’s end, or competitors will simply respond. It’s a good test of your supply chain on the e-commerce side to offer something like this, and all of these warehouse retailers are fairly mediocre at the online experience, so I could see this happening for someone like Costco whether Sam’s keeps it up or not.

No! I can’t speak for BJ’s, but as for Costco, I don’t always shop there because they are cheap. When even your doctor says, “Costco’s products are so well vetted, the slo-Niacin they carry will do you just fine. No need for a another prescription.”

They just flat out carry good stuff and, when it doesn’t work, they pull it, like they did with their Flea and Tick brand a few years back. It’s been re-worked and back on the shelf and this time it works.

It’s all about trust people.

The Shocking Values program at Sam’s Club bears an eerie resemblance to Woot!, an online daily deal site that I have used occasionally. No shame in copying a good idea, I suppose, but I don’t see this achieving the kind of scale that will move the competitive needle versus Costco.

The advantage of such a program may be that it gains Sam’s permission to communicate with its members on an everyday basis. The challenge will be obtaining high-quality deal merchandise in sufficient quantity and variety to keep it interesting for shoppers. This reminds me of the off-price store problem — pretty soon the factories start churning out cheaper products to feed the beast.

My summary judgement of this program: Very little shock; no awe; value to be determined.

Understanding your customers’ needs and then working out how to best satisfy them is a key requirement to winning in a competitive retailing environment. It’s unclear if Sam’s Club and Costco have exactly the same customers with the exact same needs. I frequently hear people talking about the quality and uniqueness of Costco’s products and the high quality of their customer service. With Sam’s, I’m more used to hearing people talk about their low prices. It’s important for Sam’s to work out who they’re competing against and for which customers and trips. If Sam’s has analyzed their customer data and determined that new products and daily deals are demanded by their customers, then their approach could help them to achieve sales gains. But the new products and the daily deals must be driven by a deep understanding of individual customers, and they need to be tailored to the specific needs of those individual customers. If these efforts are customer-centric, then they will have a great chance to succeed, but if they’re not, they could amount… Read more »
0
|
0
-   Share

Having worked for both Sam’s Club and Costco back in the day, I can tell you that at one time the only real Sam’s Club “competitive advantage” that did concern Costco was the buying power of Walmart; that if ever Sam’s Club fully leveraged that buying power of the Mother Ship, and brought that pricing to club floor, it could indeed impact the close quarters competitive dynamic and stall Costco’s membership growth. You have to remember that in the membership club space, memberships account for up to 85% of operating income. Growing and retaining higher disposable income members is the name of the game with Costco (especially that $115 Executive Member representing 15%[?] of the current Costco membership base). The more a member has to spend, the more they will buy (in volume) and help drive that membership club “productivity loop” that Jim Sinegal built the Costco business model on, etc. I do not believe Costco worries so much anymore about Walmart/Sam’s Club buying power. They now have some top tier buying power themselves. Sam’s… Read more »
0
|
0
-   Share

Braintrust
"Daily deals are the norm at a number of retailers already. I bought a fantastic sun dress at H&M yesterday for $4. Max is right, Sam’s needs a better-evolved identity to compete with Costco — crazy deals alone won’t cut it."

"Saving 16 percent is shocking? Seriously? Shocking to me would be 90 percent — I’d be shocked. There’s always someone cheaper. Always. Go back and try again."

"I hope "Shocking Values" isn’t retail’s version of a defibrillator. If so Mathews, Phibbs and others are right, it won’t ultimately work on patient Sam. Seems to me this is the struggle for differentiation and we keep coming back to the same old trough — price reduction."