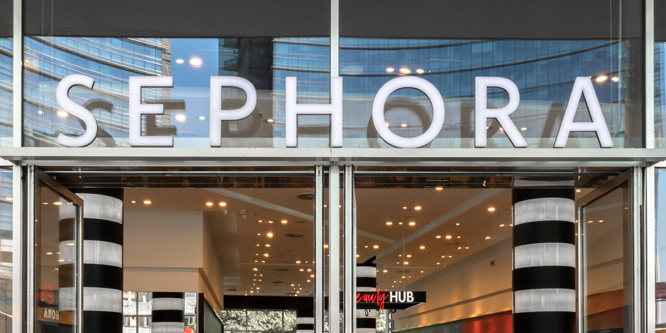 The death of George Floyd while in police custody in Minneapolis appears to have changed America in a fundamental way. Gone, for the most part, are denials that systemic racism and inequality in the U.S. exist. Businesses anxious to publicly get on the right side of history are stepping up with pledges of help in various forms. That includes Sephora, which has committed to growing its current roster of nine black-owned brands to include others that will eventually occupy at least 15 percent of the space on its store shelves.

“It starts with a long-term plan diversifying our supply chain and building a system that creates a better platform for black-owned brands to grow, while ensuring black voices help shape our industry,” Artemis Patrick, chief merchandising officer of Sephora, told The New York Times. “We recognize we can do better.”

The idea for the 15 percent pledge began with an Instagram post by Aurora James, founder and creative director of Brother Vellies, a brand committed to “keeping traditional African design practices, and techniques alive while also creating and sustaining artisanal jobs.”

Ms. James argues that many retailers have built their success with stores in minority neighborhoods and that black-owned businesses can help them achieve even more.

Ms. James writes that, as a businessperson who grew her company from its start selling items at flea markets, she understands the complexity of making good on the 15 percent pledge and does not expect that retailers like Sephora and others will suddenly have shelves stocked with products from black-owned suppliers next week.

She has specifically called out Target in her efforts to gain support among major retailers. The retail chain, that was forced to close stores after looting broke out in some locations around the peaceful protests in connection with Mr. Floyd’s death, committed $10 million to advance social justice through partnerships with groups including the National Urban League and the African American Leadership Forum.

RetailWire has reached out to Target for comment and will update this article if it receives a reply.

Please practice The RetailWire Golden Rule when submitting your comments.
Braintrust
"Sephora may have been the first to commit, but I fully expect more retail brands to follow. "

"The African American beauty market has been grossly under-served, considering African Americans spend nine times what their white counterparts do in the beauty category."

"To me, incorporating products from black-owned businesses and marketing that is just smart business."

Businesses need to be honest about where they are, prioritize and plan. It may take two to three years or it could be just recognizing the opportunities that were ignored so far. So long as they communicate the plan and hold themselves accountable, progress will be made.

For complex and polarizing initiatives like these, besides pitching it as a project for greater good, a proper business case needs to be made. Only then will the initiative get support from everyone.

I guess the question I have is why wasn’t Sephora doing this before? They have a wide demographic that shop their stores and you want to serve that demographic so they don’t go anywhere else.

The goal of committing 15 percent of shelf-space to black-owned brands is noble, as long as it best addresses consumer needs. Ultimately retail is about best addressing customer needs. In the beauty space, it’s a no-brainer. The African American beauty market has been grossly under-served, considering African Americans spend nine times what their white counterparts do in the beauty category.

Additionally, African American skin products have a higher propensity to have talc in them – and it is estimated that 20 percent of talc products contain asbestos.

The beauty category can certainly do better. Sephora committing to better serve a lucrative market is socially responsible, and it’s good business sense.

I’m not sure using some percentage pledge as the guideline for progress is the way to go. It’s a good start so I don’t want to disparage the effort but it seems disingenuous to me. To me, incorporating products from black-owned businesses and marketing that is just smart business. Hold events with the owners, engage in joint marketing campaigns, drive community. I’m pretty sure the African American shopper is eager to support black-owned businesses and if retailers can show true partnership, that will help both businesses. It’s cool to see steps being taken to give opportunity to black-owned businesses but I feel there are better ways to go about it than declarations like this.

Sephora may have been the first to commit, but I fully expect more retail brands to follow. This is long overdue, and for retailers that serve wide demographics, optically it gives the impression they just didn’t care about reaching their customer demographics if they don’t have a product mix that serves every customer that walks through their doors. This should have been an easy decision for Sephora. The real question now is, where are Target, Ulta, CVS, Whole Foods, and countless others. Why aren’t retailers jumping on to this pledge?

It’s a positive move for sure, but whenever I see really specific numbers like that (15 percent), I have to ask, “how’d you get to that??” — pulled it out of a hat? Figured space per brand? I fear the former, which usually means it won’t make business sense one way or the other for very long — in which case, you wish they’d thought it through more.

It isn’t entirely clear whether the goal is supplier diversity to include 15 percent of black-owned brands, or have 15 percent of the products in the portfolio that are meant for the black demographic.

Braintrust
"Sephora may have been the first to commit, but I fully expect more retail brands to follow. "

"The African American beauty market has been grossly under-served, considering African Americans spend nine times what their white counterparts do in the beauty category."

"To me, incorporating products from black-owned businesses and marketing that is just smart business."