Should ‘best by’ dates expire? 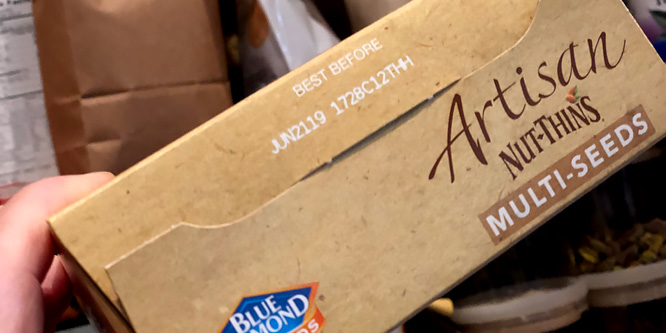 Carrefour is launching a social media campaign asking consumers to help choose new wording to replace “best before” on food packaging. France’s largest food retailer said the phrase is misleading and is responsible for 20 percent of households’ food wastage.

Among the replacement options (in English):

Carrefour has already scrapped best-before dates on 100 of its own products (e.g., sugar, salt, vinegar) and extended the best-before or use-by dates on 400 fresh and grocery products.

“Best before” — as well as “Best by” and “Best if used by” — have replaced “Use by” and “Sell By” in many categories to help reduce food waste, but many consumers remain confused that such phrases refer to spoilage rather than taste. Retailers generally use “Use by” or “Sell by” labeling on meats and fish but use a variety of expiration dates on eggs and dairy.

A study this year from the Université du Québec à Montréal based on interviews with grocery stockroom managers found shoppers often reach to the back of shelves to grab items with the most distant best-before date. Grocers were found to throw away perfectly edible items whose best-before dates had passed or were close to passing due to reputation concerns.

A 2016 survey from the Harvard Food Law and Policy Clinic found that 84 percent of respondents occasionally throw away food that is past its labeled date and a third of respondents “usually” or “always” do.

DISCUSSION QUESTIONS: What’s your solution to reducing consumer confusion over expiration dates? Is removing or re-wording best-by labeling feasible or are there better options?

Please practice The RetailWire Golden Rule when submitting your comments.
Braintrust
"No matter what verbiage the industry settles on, the only real fix for reducing food waste is to change consumer behavior."

"Consumers don’t want suggestions or vague descriptions. They want definitive “do this” or “don’t do that” instructions that are universal."

"This is surely focusing on the wrong thing, the whole idea of the wording on the packaging is to ensure that customers get the best possible quality and enjoyment..."

11 Comments on "Should ‘best by’ dates expire?"

Foods that spoil and go bad, like seafood, should have use by dates. Not only is this a matter of safety, but it also helps consumers to know how long a product they buy has been sitting around at a retailer and, therefore, how long they can keep it at home before eating. Other foods, like fruits, don’t really need dates as consumers can see and easily assess freshness for themselves.

That said, I find Carrefour’s alternative wording very confusing and I am not sure they represent a sensible step forwards.

It all depends on what you are trying to say. “Use By” implies the food is not edible after the date specified. “Sell By” tells you when the retailer needs to move the product off the shelf, but not how long it is safe for consumers to eat. And “Best By” could mean the product is still safe, but loses some desired quality — flavor, moistness, dryness, or whatever — or is some other way degraded from its optimum condition. The bottom line: these phrases aren’t really all that interchangeable. I suppose there are packaging technology solutions that might help here, but they would raise the cost of food. And no matter what verbiage the industry settles on, the only real fix for reducing food waste is to change consumer behavior. If we ate everything we bought within a day or two of purchasing it would be a different story. But we don’t. We buy more than we can consume, store it and one day, when we are in a manic cleaning fit, we discover… Read more »
6
|
0
-   Share

If you take a look at various product forums, you will find all kinds of confusion around verbiage that companies use to describe various levels of “expiration.” When I recently purchased an item that I noticed was missing an expiration date (yet had a date-like number faintly stamped on the package), I contacted the company via email and was told that, for their products, the retailer is supposed to look at the stamped number (evidently the production date) and determine a “best by” date, then place a tag reflecting that date on the package. Oops. That didn’t happen but how convoluted, right? When I did the math, I realized the product was right on the cusp so I returned it. Consumers don’t want suggestions or vague descriptions. They want definitive “do this” or “don’t do that” instructions that are universal. Why should a box of crackers be different from a package of meat? Both have a date past which consumers shouldn’t eat the food or wouldn’t enjoy it if they did. Marketers and retailers should… Read more »
3
|
0
-   Share

It is unfortunately that we can’t rely on “good judgement” by consumers. For non-perishable foods, I think it is still prudent to have a date on the package that estimates when the product is best for eating, as most foods will deteriorate over time even in sealed packages.

I would avoid putting “sell by” on any package, as that is only for the retailer and it will confuse consumers. A sell by date could be printed in more discrete/coded format.

As for the best terminology for consumers, I think all of the suggested phrases are clear to me.

This is surely focusing on the wrong thing, the whole idea of the wording on the packaging is to ensure that customers get the best possible quality and enjoyment from their purchase. Retailers need to improve their own supply chain operations to reduce waste and not change or blame wording for their own shortcomings. If they go down this route it is a slippery slope to selling poor-quality and even potentially dangerous foods.

Good supply chain solutions can reduce waste dramatically, improving profitability for the retailer and quality for the consumer. Companies need to get it right within the business first and then see if a change in wording is needed. And don’t fudge the problem by removing these valuable labels.

We have got to ensure food safety as food-borne illness is on the rise. Poor product rotation is still an issue in both food stores as well as restaurants. So I’m not certain there is a quick fix to the current challenges of sell-by dates without impacting food safety. I say store-level and restaurant kitchen product rotation training and execution is key for now.

Transparency is the key here. I like the idea of talking about safety with these kinds of warnings, so the consumer knows exactly what potential issues they may facing. “Safe if used by” or “Use before XX/XX to ensure safe consumption” are two possibilities. This puts the onus on the manufacturer to ensure quality through that date and better guides the retailer on markdowns.

It all comes down to education. Even without a change to the text on the package, educating customers about food safety relative to Best By dates can help. Perhaps we need to provide both a Best By and a Use By date, so the customer has a better sense of the condition of the product and when it should be discarded.

The problem here is largely that of slow-moving inventory (whether it’s on the store shelf or the consumers’) So the alternatives are better inventory management or more stale items being sold and/or consumed. So while I’m sure everyone would prefer the former, I think we all know removal would likely lead to the latter instead. I vote stay.

The solution is a standards body selecting a definition and staying consistent with it. In lieu of that, however, rewording won’t help much and the “best by,” “use by,” and “sell by” definitions that Ryan outlines should be fine. Ideally, all rotten or unsafe food would be removed but removing food based on food expiration dates are very much a manual process — putting pressure on grocers to find ways to simplify the process.

Interestingly those tomatoes labelled fresh might be sitting en route in a cargo container for over a month while potatoes can be stored for up to nine months. Not sure how much impact we would be able to see.

All of the posts had good points and suggestions. I don’t know how to fix the problem or make these labels more understandable, but here’s the commonsense reality: Shoppers look for a date on a package. No matter what the wording and advisory is, they will not buy the product when that date is coming up soon. In fact, they will rummage through the packages to find the latest date. How do you fix THAT?

Braintrust
"No matter what verbiage the industry settles on, the only real fix for reducing food waste is to change consumer behavior."

"Consumers don’t want suggestions or vague descriptions. They want definitive “do this” or “don’t do that” instructions that are universal."

"This is surely focusing on the wrong thing, the whole idea of the wording on the packaging is to ensure that customers get the best possible quality and enjoyment..."