Should shorter lines for the iPhone 8 concern Apple? 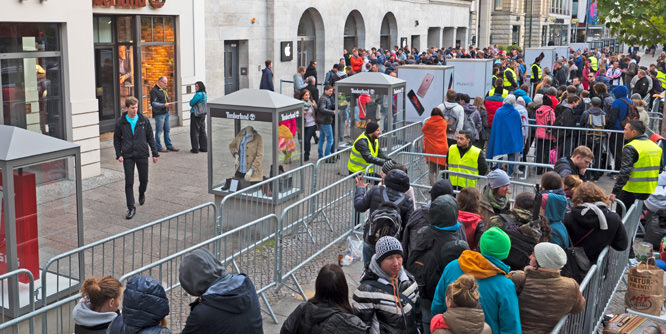 While industry watchers offered numerous explanations, the tech community was still surprised by the small crowds supporting last Friday’s launch of the iPhone 8.

Apple’s iPhone launches, since the first in 2007, have been consistently heralded in with lines around the block at company stores. Although a few places such as Singapore drew crowds for iPhone 8, the fact that only a handful showed up at many prominent locations became a news story. Articles noted that lines and the overall buzz around launches have weakened over the last few years, but still looked for explanations as to the light turnout on Friday.

Among the reasons given:

DISCUSSION QUESTIONS: Are long iPhone launch lines still crucial to Apple’s hype-building efforts? Why do you think the crowds have been sparser in recent years and for Friday’s iPhone 8 launch? Did Apple err by rolling out the iPhone 8 and iPhone X separately?

Please practice The RetailWire Golden Rule when submitting your comments.
Braintrust
"At the end of the day, it's the number of units shipped that determines success or failure."

"Apple represents new and different, and the launch of the 8 simply does not meet that mark and customers responded appropriately."

"Shorter lines in North America don’t mean anything. Pre-arranged contracts with cell phone carriers have looked after that."

14 Comments on "Should shorter lines for the iPhone 8 concern Apple?"

Long lines are no longer critical to maintaining the Apple mystique. The company has been successful in getting more customers to buy online through advance reservations. Also, the hype this time was not around the 8, but the coming X. Not rolling them out together was a smart move in that it gives 8 purchasers a chance to buy them undisturbed by potential crush of X buyers.

As a loyal Apple fan I have to question the strategy behind launching both the iPhone 8 and the iPhone X at the same time. While the iPhone 8 certainly has some incremental improvements over the iPhone 7 and is a solid device, the level of innovation introduced by the iPhone X absolutely will steal the hype and thunder relative to the 8’s release.

Apple, which has consistently produced record results, should expect a significant lift of revenue and profits once the iPhone X goes on sale. Especially as it is a dramatic redesign of the iconic smartphone. For those first adopters, they will most certainly choose this device over the 8. So while there will be a degree of cannibalization, as folks may skip the 8 in favor of the X, ultimately Apple will be the clear winner in this scenario.

Very few people who wish to upgrade will buy both the iPhone 8 and the iPhone X. As such, the demand that is available is split between the two new products. The timing of launches doesn’t matter so much; there is only so much demand and Apple has fragmented that demand between its two new devices.

In general, the hype at recent launches has been more muted. As good as new phone features are, they are simply not compelling enough to persuade many people to fork out increasingly large sums of money. Apple has become obsessed with tweaking relatively minor aspects of the phone rather than solving the big problems users have or coming up with something radical or revolutionary.

Smartphones are no longer revolutionary, just evolutionary. Therefore there is nothing about the iPhone 8 worth waiting in line for. It remains to be seen whether the X can re-kindle excitement in pushing the envelope of what a smartphone “is,” but I wouldn’t bet on it.

No question that long lines help brand perception, build consumer and media enthusiasm and probably create some incremental demand but, at the end of the day, it’s the number of units shipped that determines success or failure. I think the lines have been short for all of the reasons cited in the article — plus one. The low-end iPhone 8 is only $100 more than the original iPhone, not a bad deal even if the cost of technology is supposed to be going down. But it isn’t that much different — in the eyes of most consumers — from the iPhone 7. The iPhone X however, probably establishes the top price point for the market. For most people — and media commentators — $1,000 sounds like a silly price to pay for a phone, no matter what it does. I think the price of the iPhone X has caused some number of consumers to start looking harder at the price of the iPhone 8 and asking themselves — for the first time in Apple history… Read more »
2
|
0
-   Share

Yes! Let me clarify. Shorter lines in North America don’t mean anything. Pre-arranged contracts with cell phone carriers have looked after that. This makes for a misleading forecast on health. However, in lead markets like China, where we read about two (yes t-w-o) people lined up for iPhones, Apple needs to be concerned. They’ve missed their market and their competitors offer an assortment comparable to theirs for generally half the price.

To some degree, Apple is suffering from “sequel-itis,” just like a movie studio that is up against huge box office numbers from the year before and decides that the safest way to cover those numbers is to release “Part 2.” Sometimes it works, but more often it doesn’t.

In this case, the reviews are in and many potential buyers of iPhone 8 have already read that it is not a significant improvement from iPhone 7. (That did represent a big leap forward.) In fact, updating to iOS 11 will accomplish many of the same tasks for free.

For purchasers of an iPhone 7 who are in the middle of a two-year payment play (even though untethered from their phone carrier), it pays to wait. And for early adopters, iPhone X is right around the corner.

Consumers have a choice with this product introduction — a phone that has some, but not obviously overwhelming, differences at a reasonable price, a distinctive new phone at a higher price for which orders cannot be placed yet or to keep what they have until the best choice is obvious. With the order period for the expensive phone still a few weeks away, the decision can be postponed for now. This is a different kind of introduction so shorter lines make sense to me.

Long lines and scarcity are critical to Apple’s “leading edge” image (although many of the features of iPhones are available for Android already). I believe that the X will have long lines, and Apple has reduced production quantities which should ensure scarcity.

The launch of the 8 and the X simultaneously was an unusual choice and diminished the appeal of the 8, even though that phone has some clear benefits.

I think the multi-level launch strategy will hurt Apple in the long-run. Apple represents new and different, and the launch of the 8 simply does not meet that mark and customers responded appropriately.

Units shipped matter given the omnichannel nature of today’s shopping. I think Apple wants customers to buy online and frankly the mystique of standing in line for a phone is wearing thin for most buyers. Also with iPhone 8 and iPhone X shipping separately, the bleeding edge customers — who are usually the hardcore fans standing in line for the experience — are going to wait for the iPhone X.

Long lines are important to Apple because of the positive press it brings. But in the end, the only thing that matters are the number of dollars they receive along with positive responses.

I think the reasons for the shorter long lines — and think how many companies would salivate even thinking about that phrase — are pretty well explained above. Indeed, the remarkable thing we should be studying is that the “hype-building” machine has been kept running at full speed for so long.

Does this mean Apple is returning to earth, and will have to compete along with everyone else, offering quality products and actually having to “sell” them? Perhaps.

This makes a great case study on PR. On the one hand, the press (possibly encouraged by Apple) used the lines to show how popular earlier versions were. And that succeeded. Then their competitors starting using “the lines are shorter” claims to attack them — even making fun of Apple lines in Samsung ads. Of course, that either sets the competition up for a benefit or a problem … depending. And then … things change. Cell providers are doing a better job of capturing initial business. The iPhone 8 wasn’t introduced as the main event — the iPhone X was. And even Apple committed consumers like myself are wearing out a bit on the hype for any new phone. Hence, two questions: Does it mean anything that lines could be shorter this time? Probably not. And, is there a moral for us to take away from this PR study? Yes. Take care when a measurement is assumed to reflect your company health. Retail has been suffering this in the past few years now that comp… Read more »
0
|
0
-   Share

The iPhone 8 is facing so many headwinds. Some of which should not concern Apple shareholders all that much: the iPhone 8 is not perceived to be a quantum leap forward from the iPhone 7; iOs 11 helps get you many of the new features without upgrading phones; iPhone X will steal share and enthusiasm for the iPhone 8.

What should be more worrisome for shareholders is Apple’s inability to capture consumers’ imagination like they once did. Apple Watch has been <> but it never really entered the zeitgeist. The iPad market is saturated, and new releases have been incremental upgrades. Android phones often out-innovate Apple phones, so despite the inferior interfaces and design, they steal Apple’s thunder. So, while Apple has a built-in phone market that will sustain healthy quarters for years to come, if Wall Street continues to hunger for the good old days of Apple dominating the zeitgeist, share prices will surely suffer.

Braintrust
"At the end of the day, it's the number of units shipped that determines success or failure."

"Apple represents new and different, and the launch of the 8 simply does not meet that mark and customers responded appropriately."

"Shorter lines in North America don’t mean anything. Pre-arranged contracts with cell phone carriers have looked after that."