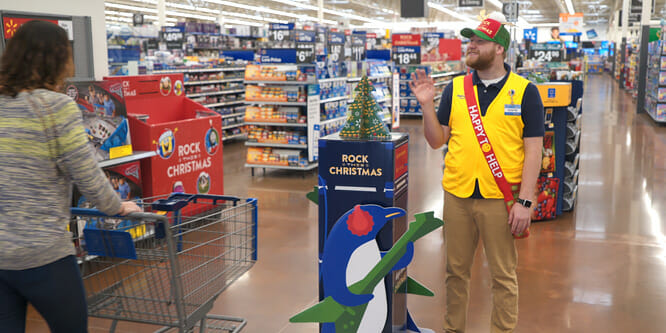 Walmart’s stock price took a 10 percent hit yesterday after the company announced that its online sales grew 23 percent in the fourth quarter, down from 50 percent in the third, and that its operating margins shrunk as it focused more on its e-commerce operations.

Lower online percentage sales growth may have surprised investors, but not Walmart management as the quarter marked the one-year anniversary of its acquisition of Jet.com. CEO Doug McMillon, however, did acknowledge that slowing sales were also partly due to “operational challenges” faced by the retailer.

Mr. McMillon said that “seasonal spikes” in inventory of products including electronics, gifts and toys led to a situation in which Walmart fell short of its “basic in-stock for e-commerce” items. He said the experience will help the company learn “how to deal with higher volumes” going forward.

Walmart’s margin challenge should not have been a surprise to investors. Reuters recently reported that Marc Lore, CEO of the retailer’s U.S. e-commerce operations, had held talks with large CPG suppliers to let them know that Walmart.com is focusing more of its efforts on higher priced items, preferably $10 and higher, in an effort to offset its delivery costs.

“We’re accelerating innovation in the business to make shopping faster and easier for our customers. Creativity, decisiveness and speed are priorities,” he said. “We made good progress this past year to save busy families time and money, and we’ll do more.”

One bright spot for Walmart was its same-store sales, which increased 2.6 percent during the fourth quarter as traffic improved 1.6 percent.

Walmart’s customers who shop both in stores and on its websites are key for the company, said Mr. McMillon, spending nearly twice as much with Walmart as those who shop in stores alone. He pointed to online grocery as one area where customers spend more with Walmart after using the service. “We’ll lean in this year by nearly doubling the number of online grocery locations in the U.S.,” he said.

DISCUSSION QUESTIONS: Are there reasons to be concerned about Walmart’s prospects coming off its fourth quarter performance? Where do you see the greatest challenges and opportunities for the retailer in 2018?

Please practice The RetailWire Golden Rule when submitting your comments.
Braintrust
"I'm no stock picker, but maybe this is a buy opportunity ..."

"Walmart does not have the offsets of an AWS. Unlike Amazon, Walmart has to play by the rules when it comes to performance metrics."

"This isn’t a sprint … it’s a marathon. And the decisions to invest in the long-term e-commerce play are just now starting to pay off..."

Walmart’s stock took a similar hit a few years ago when management decided to investment-spend in the store experience — more payroll in areas like fresh food, remodeling and refixturing as needed, and so on. These were smart strategic choices that weren’t meant to please investors only interested in the latest quarter. Walmart’s decisions at the time have been rewarded with better results ever since.

I look at the 10 percent drop in stock price as a similar overreaction. Walmart is now starting to come up against its own numbers after the Jet.com acquisition, and (more importantly) it’s doing major spending on logistics and marketing to gain omnichannel market share. I’m no stock picker, but maybe this is a buy opportunity …

I agree. At the moment, Walmart is doing a lot of things right. The Street has a hard time being patient. I think Walmart deserves a round of applause for holding the line.

Walmart is developing their core value and it does require some learning along the way. I’ve been impressed with their ability to start innovating within such a massive organization and a few missed projections are to be expected.

Walmart’s Q4 e-commerce growth shortfall is just bump in the road. The company is well set on their e-commerce food strategy; less mature is their non-food e-commerce assortment, margin, fulfillment strategy and execution.

Despite the immediate shortfall, Walmart’s guidance for a full year target of 40 percent e-commerce growth is achievable and margin pressures are inevitable given the increase in e-commerce mix. Countering margin pressures will require continuous adjustments in the company’s investment decisions on prices, customer acquisition costs and shipping strategies.

Keeping an eye on the consumer — and Amazon — is both Walmart’s greatest challenge and opportunity in 2018. Omnichannel is incredibly complex; it requires patience rather than short-term reactivity.

To stay relevant amid “operational challenges” — and investor and media scrutiny — Walmart needs to improve omnichannel integration to avoid out-of-stocks (especially during the busiest sales period). Integrating its legacy physical store systems with online systems will pay off over the longer term.

Opportunities include resonating among younger, urban, online shoppers and using its abundance of stores (which Amazon lacks — for now) to keep innovating with automated pickup towers, Scan and Go technology and easy click-and-collect and returns.

Walmart does not have the offsets of an AWS. Unlike Amazon, Walmart has to play by the rules when it comes to performance metrics. Expanding groceries, product price increases, new private apparel brands, Jet.com sales down, TV ads, Super Bowl ads, learning the ropes of competing with Amazon. A bumpy road with ups and downs.

The biggest challenge to Walmart, with hundreds of new initiatives going on at once and thousands of new employees? Who is Walmart? Why shop Walmart? Yes, operational speed is important, but only if consumers learn to love the Walmart brand.

One quarter, while WMT continues to invest in omni-channel excellence, is not a reason for concern. They have a track record of making strategic changes to address consumers’ (latest) demands: convenience and assortment.

Walmart jumped into e-commerce in a big way. Hiccups are to be expected. Wall Street should take a longer point of view and not judge the company on one set of data. I expect Walmart will still be standing after many other retailers have been buried by Amazon.

50% growth — I’m assuming this is year-on-year, but it would be even more true if it’s quarter-to-quarter — simply isn’t sustainable (if you doubt it, keep multiplying a number by 1.5 in your calculator and see how quickly you run out of screen). So a decline was inevitable. Whether a fall to “only” 23% was the “right” number is open to debate, but overreacting to a single quarter is almost always … well … overreacting. One could just as easily be cheered by the increase in same-store growth. After all, it’s where the lion’s share of sales still occur.

Walmart is in it for the long-term and investors should rejoice, not revolt against this! They are one of the few retailers who not only have the size, scale, and skill to truly deliver on the omnichannel/unified commerce promise and are willing to make the investments in the business required to achieve it – even at the expense of short-term gains. Omnichannel is very difficult to deliver cost-effectively, and that will continue to be their biggest challenge, not just competing with Amazon. We have seen many examples over the past year of Walmart’s innovation in many cases matching or beating Amazon. So long as Walmart stays focused on their customers and what they value, they can achieve success where other retailers have faltered.

Of course there is reason to be concerned with Walmart’s slowing online sales increases. It looks like the root cause was operational missteps with inventory planning. While it isn’t good news, at least it is a fixable problem. Inventory planning in an omni-channel world is complicated and couple that with enormous demand over the holiday season makes planning, allocating and replenishing merchandise even more complex. I am sure they are taking this seriously and it will be corrected quickly.

While the misstep will hurt Walmart’s stock for a while, they will rebound. Walmart has been very innovative by launching compelling mobile app features, Mobile Express Returns, customer engagement strategies like in-store parties and aggressively acquiring companies to expand online capabilities and broaden its customer base (Jet.com, ModCloth, MooseJaw, Bonobos, etc.). Walmart is a formidable competitor that will correct these operational issues.

Lore the underdog, Bezos the new master. In underdog fashion, Lore, a student of Mr. Sam, will lose the early rounds. But how will Wall Street respond when a few of the changes take hold. Will there be chaos in Seattle? EDLP is obviously not the end of the journey, maybe it’s every day convenient shopping — and Bezos gets this. Use the force Luke, I mean Lore.

Ridiculous overreaction by Wall Street — which remains clueless about retail. These were good results. Walmart added $5 billion in sales over the same period last year.

Yes, online slowed. But the acquisition of Jet.com annualized out, and Walmart is still growing by very respectable levels.

As for profits, these fell because of investments not because of weaknesses in the business. Walmart is playing the long term game, and rightly so!

Walmart’s challenge is always going to come back to Amazon and their constant attack at the retailer’s lion’s share. Since Walmart has to justify it’s overhead compared to Amazon’s much lower overhead cost, it must continue to provide reasons for people to come into the store over waiting 2 days ordering online.

As Amazon grows and the shipping window becomes 2 hours, big box retail may become obsolete with more versatile stores like Dollar General taking the place of the retail giants.

Investors are worried because of Walmart’s history. Walmart has not been able to tame the eCommerce monster before it bought Jet, and the drop in online sales for the 4th quarter compared to the 3rd quarter (read holiday drop) is a bump in the road, but a bump that worries investors. Walmart does many things well, but closing down 64 Sam’s Clubs, the decline in Q4 compared to Q3 would have any investor worried. Let’s hope that history doesn’t repeat itself as Walmart continues to struggle online, and with their profits.

This isn’t a sprint … it’s a marathon. And the decisions to invest in the long-term e-commerce play are just now starting to pay off and some of the bills are coming due from the Jet.com acquisition.

In this day and age, shareholders are not very patient to see the end game. Let’s not ignore “online sales grew 23 percent in the fourth quarter.” That’s 23% GROWTH.

Braintrust
"I'm no stock picker, but maybe this is a buy opportunity ..."

"Walmart does not have the offsets of an AWS. Unlike Amazon, Walmart has to play by the rules when it comes to performance metrics."

"This isn’t a sprint … it’s a marathon. And the decisions to invest in the long-term e-commerce play are just now starting to pay off..."