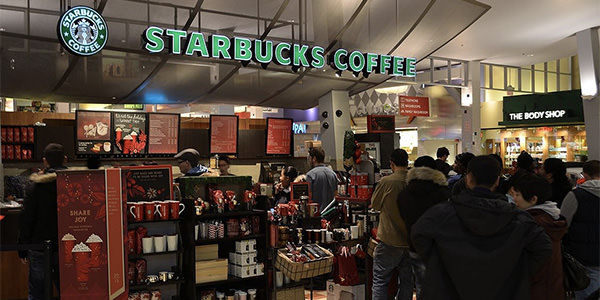 The Mobile Order & Pay app has been such a success for Starbucks that it’s causing bottlenecks in its highest-volume stores at peak times and leading some impatient customers to walk out.

“This congestion resulted in some number of customers who either entered the store or considered visiting a Starbucks store and then did not complete a transaction,” said Kevin Johnson, chief operating officer, last week on Starbucks’ first-quarter conference call.

The long lines at peak hours were the “most significant contributing factor” to the company’s 3 percent comp gain in the quarter, its worst quarterly increase since 2009 and below Wall Street’s targets. Revenue forecasts were trimmed for the year.

To address the problem, Starbucks is adding new roles and resources to specifically support Mobile Order & Pay, including adding one or two more baristas focused on mobile ordering and payment at busy stores during peak hours. It’s also testing sending text alerts to customers when orders are ready. Said Adam Brotman, EVP of global retail, on the call, “Really, it’s just about getting after a better deployment method for those barista roles in those stores.”

Starbucks noted that it has continually made adjustments over the last five to six years to manage expanding traffic and other check-out disruptions. In 2014, the need to warm new pastries was slowing pickup. But this is the first logjam caused by mobile orders and Mobile Order & Pay is expected to expand with AI-based voice command ordering arriving soon.

DISCUSSION QUESTIONS: Is the increased use of mobile ordering bound to add more unpredictability to the pick-up process across retail? What steps could Starbucks be taking to ease congestion caused by mobile pickup?

Please practice The RetailWire Golden Rule when submitting your comments.
Braintrust
"With all of these fast-paced electronic/digital innovations, there are unintended consequences."

"This has always seemed to me to be a technological widget that gets headlines but hurts the bottom line."

"This is yet another case of solving just one aspect of the equation. Did anyone ask the question of what will happen if this actually works?"

With this type of innovation comes uncertainty. This is a good-news/bad-news situation. But with all of these fast-paced electronic/digital innovations, there are unintended consequences that any retailer embarking on one of them has to consider. Retailers must anticipate that if an innovation is successful, they will have to react quickly or provide a safety valve to relieve the pressure of unbridled success.

When making it easier on the customer causes pain for other customers, there is a problem. Starbucks will work this out. They are testing a system that is proving to be very successful. Through data, they will be able to know when to properly staff stores to accommodate the busier times. The technology should also be able to tell the customer when the order will be ready. Real-time analytics based on the online orders and the in-store activity will tell the customer their order will be ready in five minutes, 10 minutes, etc.

Given the declining traffic across many retailers, store congestion from too much traffic is a “high-class problem” for Starbucks.

It should be comparatively easier to fix operations versus the brand-building required to get people to come to stores. As Tom Ryan points out, there are staffing changes, processes and even store designs which can address the consumer congestion at peak periods.

However, a disappointing customer experience should not be underestimated and must be addressed with urgency. Every customer that walks away from the app and store becomes the worst brand advertising imaginable … and they will tell everyone on their social media. There are too many alternative choices and Starbucks can ill afford to lose any sales or customer loyalty.

This is yet another case of solving just one aspect of the equation. Did anyone ask the question of what will happen if this actually works? It seems this will increase predictability as Starbucks will have orders in hand (and will have some historic data). They should be able to use this information to schedule barista resources without undermining patrons actually waiting in line in the store!

As a sidenote — I recently was in New York at NRF and visited a local Starbucks for a cup of coffee (simple!). The Barista was half asleep, or high or both! I didn’t even get a mumble. I wanted to walk out but stayed and ordered a coffee. I was so turned off by the entire experience I almost threw the coffee away. It is yet another example how of fragile your brand value can be. That single experience will drive me to other coffee shops.

The first step in addressing a problem is to know what it is. Since more and more people are using phones for commerce, Starbucks will be in a position to reconfigure the store to meet new needs. Will other retailers follow?

Mobile ordering is not adding unpredictability, it is altering customer behavior and Starbucks will make needed adjustments. Once the chain learns customer habits it will staff accordingly and will add customer communication features that will cut wait times.

Order throughput and truth in communications (i.e., “it will be ready in three minutes”) will take Starbucks a long way to the top of the order volume curve but, like for others in consumer service, the key is turning wait time from “wasted time to want time.” Digital message presentation and interactivity can increase profit per order and add value of the location visit. The threat of a diminished customer experience (and the loss of revenue and loyalty that naturally follows) is the opportunity to take the location to new levels of success. Starbucks and other QSRs that are going headlong into this wall can take some lessons from medical waiting rooms, banks, auto dealers and many other sectors in which digital signage is used to brand, merchandise and reduce perceived waiting times.

There’s a Starbucks about 5 minutes from my house. When we are about to head out, I send the order in and it’s always waiting when I pull in. The perceived wait time in this case is effectively negative, because it saves me time in their often-busy drive-through lane! The time-shifting Starbucks has enabled has certainly increased the proportion of take-away coffee purchases they’ve earned from my family.

This has always seemed to me to be a technological widget that gets headlines but hurts the bottom line. There are several reasons.

All-in-all, this feature seems to be one of those shiny baubles that can distract retail (especially because of PR headlines) but which can actively harm business.

Can Starbucks cancel the service? It would be tough on some customer relationships. But it might also be their best strategy.

The problem Starbucks has needs to be addressed quickly, as the folks waiting in line have other options, and for the premium prices they are facing, walking away and grabbing a McDonald’s coffee for $1 is a better option. For me it is just coffee and I will grab one for $1 if I need a quick caffeine fix. Either way, it needs to be fixed, as all of us are in a hurry to go nowhere fast.

This is an interesting challenge. They may well be able to schedule more baristas to work at peak times, but how many more coffee machines can they install in their small-footprint, high-volume stores? There will be a maximum throughput that can be achieved per square foot — and square footage isn’t unlimited.

Maybe they need to ask Amazon if they can borrow some of their drones.

Contrary to what some other folks have mentioned, this is not a negative indicator. This is simply a typical stage in the innovation lifecycle that, I have no doubt, Starbucks will be able to remedy.

As companies adopt new technologies, they are usually classified as pilot innovation projects. If successful, they get rolled out as enterprise projects. The is the bulk of what we have seen by retailers over the last five to eight years, whether it is click and collect, beacons or anything else that has started as a project. Now we are in the phase of operationalizing and embedding the projects into core offerings. As companies do that there will be challenges, which is why we see this at Starbucks. It is a positive thing that I am confident will get sorted out as this becomes a core piece of their business.

As new technology is changing the shopping and buying journey, retailers need to change their processes. Buy online, pick-up in the store orders created a lot of complexity for traditional retailers and many brands struggled to execute those orders efficiently in the beginning because it required many different processes in the store. The good news is that mobile ordering has been embraced by time-starved consumers and it is giving them options to expedite their orders and save time. While it seems like mobile ordering is adding more unpredictability, it is in actuality improving predictability. Knowing in advance exactly what orders are coming in is valuable information for a well run and properly staffed restaurant. Issues of congestion are centered around the process in the store. Having the issue of too many sales should never be seen as negative. Staffing the right number of baristas is a start, however, identifying better processes is the key. This problem is happening in only 5% of the locations where the spike is from 7% increase (in 22,000 doors) to… Read more »
1
|
0
-   Share

The steps Starbucks is taking to alleviate the problem are definitely on the right track. The addition of a couple more baristas focused on mobile order and pay should help streamline the process the most. Another improvement they could implement would be to add in a suggested pick-up time based off of current order congestion. Starbucks could also follow McDonald’s and try out an automated ordering kiosk so baristas can focus on preparing orders. It removes half of the human interaction, but stands to increase productivity.

Now that Starbucks has had the digital app in production for a few years, they should have plenty of data on all aspects of the sales — time of day, products, time between ordering and pickup, etc. With this data, they should be able to devise a few solutions to the problem.

Actually, mobile ordering will lead to more predictability rather than the converse. Because the data is coming to Starbucks in real-time, the company can use forecasting algorithms to better predict demand on a daily, hourly and even minute-by-minute basis. What you are seeing is growing pains of a system that is binding customers more and more securely to the Starbucks franchise. I am sure they will overcome this shortly.

Braintrust
"With all of these fast-paced electronic/digital innovations, there are unintended consequences."

"This has always seemed to me to be a technological widget that gets headlines but hurts the bottom line."

"This is yet another case of solving just one aspect of the equation. Did anyone ask the question of what will happen if this actually works?"