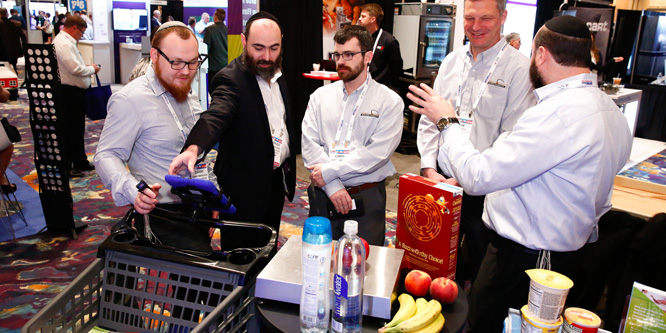 Independent supermarket retailers were once again charged to take on the “The Big Guys” at the National Grocers Association Annual Convention in San Diego last week. If they don’t, suggested several speakers, they might not be around for next year’s event.

John Phillips, senior vice president of customer supply chain at PepsiCo, presented a list of eight disruptors for the grocery industry in the next few years. It included IoT, conversation commerce (Alexa, Siri, et al), digital shelf labels, cashier-less checkout, robots and drones, autonomous vehicles, crowdsourced delivery (Instacart, Postmates or Shipt) and artificial intelligence. Some or most of these disruptors need to be addressed in order for any retailer to be successful, he said.

Other speakers at the conference spurred on the independent retailers attending to use technology that accentuates what they are best known for — customer engagement and fresh foods. Gary Hawkins, CEO of CART, a retail technology advisory group, wondered why personalization solutions that support these positive attributes haven’t taken off in the grocery business like they have in other sectors, and quickly provided two reasons. Grocery operator are incremental technology deployers and they always want someone else to pay for their technology solutions. This mindset needs to change, he stated.

There was good news for community retailers at the event. Ron Bonacci, vice president of marketing and advertising at Weis Markets, said the time is ripe for all supermarket operators to invest in digital commerce. “Ecommerce solutions are now available at one-third or one-fourth of the cost of 10 years ago,” he confirmed.

In addition to the cost of ecommerce technology coming down, these solutions can now be implemented with greater ease and less time than ever before. Several speakers suggested that basic digital engagement campaigns, which include social media and digital commerce through text and email, can be up and running in weeks rather than months.

In the end, it’s all about trying to meet the customers where they live, explained Chris Leevers of Leevers Supermarkets, a 17-store chain in Colorado. Retailers need to allocate the right resources to ensure customers are being properly served at a store.

DISCUSSION QUESTIONS: How can independent supermarket operators best use technology to compete in today’s crowded grocery marketplace? Do you agree that grocers have been held back while waiting for someone else to pay for technology solutions?

Please practice The RetailWire Golden Rule when submitting your comments.
Braintrust
"The bottom line is dependent upon management thinking about their business from an entirely disruptive perspective – a world where the customer is in charge."

"I will tell you what I really think, rather bluntly. There are some real issues that are crushing the local Independents across the country..."

"For the indie grocery chains, there is less of an emphasis on technology innovations and more focus is on building an outstanding customer experience."

12 Comments on "Technology disruptors are causing independent supermarkets to innovate"

The discussion must include the substantial cost for not only the infrastructure and technology, but also the cost of new talent required to execute the strategy. However, there are opportunities to partner. Giants like Microsoft and Google are aggressively pursuing partnerships that enable the smaller operators to engage with lower cost barriers. The bottom line is dependent upon management thinking about their business from an entirely disruptive perspective – a world where the customer is in charge. Tomorrow is day one, but it is radically different than yesterday.

I can’t wait to see what Tony Orlando has to say about this topic. Every retailer needs a website and the more informative the website can be, the better (locations/hours, inventory or at least a list of products regularly carried are must haves). Do they have to embrace technology to compete? Of course not. For 20 years we’ve been saying online grocery will take over and it’s barely a pimple on the elephant’s butt, as one of my old bosses liked to say.

Hello Dr. Needel. I will tell you what I really think, rather bluntly. I have been a charter member of NGA, and before that many other state and midwest associations, so I have the grey hairs and experience in seeing what is really happening today vs. just 10 years ago. I did not attend NGA this year, and I will not renew my membership, as it has changed to mostly a high tech convention with numerous booths promising the ultimate app which will boost your profits, without your lifting a finger. This technology is fine, and I use social media (with e-mail blasts going back almost 20 years) but they are sweeping the bigger problems under the rug. There are some real issues that are crushing the local Independents across the country: Cost of goods for the center store are weighted heavily against us. Not one person for NGA can solve this and they know it. Vendors are fleecing us on national brand pop, chips, bread, CPG top 200 items, and it creates the perfect… Read more »
10
|
0
-   Share

You know what, I am not buying this! Independent grocers will not be delivering bottles of ketchup by drone anytime in the near future, if ever. Most of the other stuff is interesting, but not mission critical.

From our research, the reason that independent grocers are used by customers has little to do with technology. It comes down to a great assortment, innovative food solutions, superior customer service, good store ambiance, solid foodservice offer, and so forth. Those are the things to focus on.

Yes, some technology is needed at the back end to improve efficiency and a solution for online delivery (where it is still very hard to actually make money) is sensible, but they are not the key levers of success.

For the indie grocery chains, there is less of an emphasis on technology innovations and more focus is on building an outstanding customer experience. You could even provide a localized, personalized experience in a community grocery store without investing significantly into AI, IoT and cashierless checkouts.

The appeal of the neighborhood grocery store is not only the specialty products you can’t find elsewhere, but going to a place where everyone knows your name without asking for your loyalty card.

Since when are digital shelf labels a “new” disruptive technology? And didn’t grocers learn they can’t beat the giant (Walmart) in its own game? Independents would be smart to understand what their customers want, develop their own value prop and execute flawlessly.

Independents continue to rely on technology just like the tier one giants. And technology does not have to be just beacons, IoT and e-commerce. What about understanding buying habits and personalizing offers based on those habits, or even something as simple as offering digital coupons? Both provide immediate impact in-store, not to mention the increase in service levels to customers. Even if those service levels are just perceived, customers will notice. And that’s the goal, right?

Grocers have traditionally been laggards when it comes to implementing new technology, with the exception of self-checkout. The main reason is cost and complexity. With thinner margins that most other retail segments, grocers have historically had lower IT budgets than other segments and their systems are complex.

The technology disruptors listed in the article are not imminent for the grocery industry, as it takes a long time for grocers to approve the investments and integrate these technologies with their legacy systems. Also, some of these technologies are still not developed enough to be economically or operationally viable.

While independent grocers have some time, eventually they will have to become more innovative, especially with the technologies that will significantly improve the shopping experience and increase convenience.

As in any sector of retail, experimentation needs to happen specific to a retailer’s unique set of assets and liabilities. With Amazon’s announcement of launching its own full line stores, we see major disruption happening. Amazon is not going to let brands dictate how and what gets put in front of customers or the data that is created.

Independent retailers need to understand that retail math has changed. It’s not a new equation, but a new set of assumptions that they do not and cannot share with other retailers. They need to define who and what they are and stand on their own in the marketplace in order to attract the right customers in the right way.

Awareness of resources available to small and mid-size businesses is critical … e.g., do these grocers even know that they can get on the cloud, access true AI and employ blockchain for free? Also, leveraging technologies that do not require an army (or ANY) data scientists and other technology experts is key. Finally, creating a tech road map (e.g., “Where do I start?”) is the first step.

Very late to a terrific discussion. The preceding comments underscore the divergent, insightful comments of the BT, which make it fun to read and participate.

Only point I would add is that independents need to know what problems that their target market gives them permission to profitably solve, and then do it better than the competitive array. Your customers will tell you what’s important, more so than predictions from the proclaimed experts.

If they continue to see these things as “costs” we have a clear glimpse into the problem itself. They need to start looking for answers outside of the grocery category. This is the kind of thinking that sent RadioShack and Toys “R” Us to the boneyard. My God. Costs? I have no words.

Braintrust
"The bottom line is dependent upon management thinking about their business from an entirely disruptive perspective – a world where the customer is in charge."

"I will tell you what I really think, rather bluntly. There are some real issues that are crushing the local Independents across the country..."

"For the indie grocery chains, there is less of an emphasis on technology innovations and more focus is on building an outstanding customer experience."