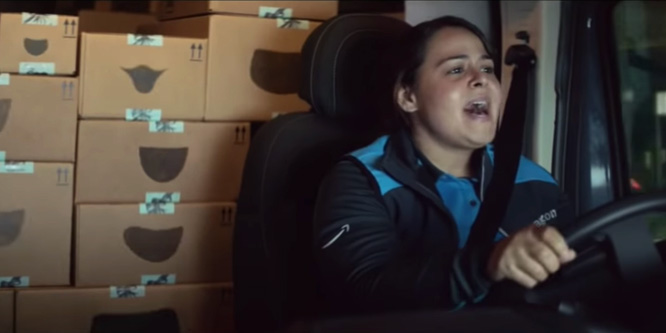 The retail industry appears headed for a solid, if not spectacular, holiday season. A wide range of forecasts from the National Retail Federation and others point to an up year following a positive, if slightly below expectations, performance in 2018. Digital sales are once again expected to take a higher percentage of overall retail sales during the last two months of the year, with NRF, Deloitte and others forecasting dollar gains from around 11 percent on the low end to 18 percent at the top.

With the above as our backdrop, we’re ready to kick off week one of year seven of the RetailWire Christmas Commercial Challenge.  This year’s competition, as in the past, will feature commercials from two retailers every week. The RetailWire community will choose which one has done the most effective job of communicating their company’s holiday value proposition to consumers.

With one week to go before Black Friday, we offer one 1:30 spot from e-tail giant Amazon.com and two 30-second ads from its smaller, artisan-driven rival, Etsy. May the best commercial win.

Amazon goes upbeat with its “Everybody” singing box spot that features human connections and the company’s capacity to deliver what consumers want and need for Christmas.

Etsy takes the “it’s better to give than receive” adage to heart with its two spots that hail the joy in giving to those we love during the holiday season and the special nature of gifts created by the site’s artisan sellers.

DISCUSSION QUESTIONS: What is your critique of the Christmas spots from Amazon.com and Etsy? Which retailer does a better job of connecting with its core customers while reaching out to new shoppers with its Christmas spots?

Please practice The RetailWire Golden Rule when submitting your comments.
Braintrust
"When it comes to attracting more customers, I think Etsy makes a stronger case as to why shoppers should buy from them."

"Boy, tough one. I’ve gotta give it to Amazon though for pulling the heartstrings a little better."

"Etsy gets my vote. Although Amazon’s commercial is very sweet and heartwarming, Etsy informs me about their products and inspires action."

22 Comments on "The RetailWire Christmas Commercial Challenge: Amazon vs. Etsy"

Both Amazon and Etsy did a great job with their Christmas spots. Amazon made the brilliant move of personifying their boxes – which are under a lot of environmental scrutiny. They’re also positioning themselves as the whatever/whenever/for whomever; another push in the direction of their goal of completely redefining convenience.

Etsy’s ad is good, I would have liked to see more sellers. Part of where Etsy struggles is giving visibility to the breadth of what their site now offers. The ad could have done a better job in communicating that aspect of their retail experience.

A great call-out on the environmental scrutiny of late, tone-deaf.

Both spots are fun, but I have to go with Amazon. The cuteness and cleverness of the talking and singing logos on the boxes is irresistible. The whole spot is rooted in family and the spirit of the holidays but is unmistakably Amazon. Turn the sound off and Amazon still communicates AMAZON and HOLIDAYS and how they are inextricably entwined. Kind of like we would have thought about the mall not so long ago. Hmmmmmm…

Boy, tough one. I’ve gotta give it to Amazon though for pulling the heartstrings a little better. Anyone who has worked retail should have a little place in their heart for that mom coming home late during the holidays. Been there!

This is not the first year that Amazon has used anthropomorphic boxes, but the concept works and is good fun. It also conveys the view that Amazon ships a lot of stuff for the holidays, offering the consumer great convenience.

Etsy’s advert is also strong. I like the linkages between the people and actual products. I also like the idea that Etsy has something for all sorts of occasions and people. The advert was a little short, but it gets the message across!

Etsy’s spot celebrates the moments filled with the joys of giving and receiving. The unique artisan character of their products shines through to emphasize their values and brand promise. Amazon’s is centered on their logo and box. The animated Amazon smiling arrow is the hero coming to your home and by the way there are real people behind the brand epitomized here by the singing and smiling driver who’s just like you. Amazon effectively leverages that it’s everywhere and is everybody. Etsy spotlights its differentiation through hard-to-find creative artisan gifts.

While both are effective, I found Etsy’s more compelling with a more narrow yet richly meaningful message.

Agree, they both reflected the brand promise. I just think Esty has a more meaningful promise.

Both commercials are strong. Amazon has used the singing boxes to pull at heartstrings for a few years now, and it is an effective strategy when it comes to invoking the holiday spirit while also showing how Amazon deliveries play an integral role. However, I like Etsy’s commercial better. I think it does a great job of highlighting not just products, but the people behind the products. When it comes to attracting more customers, I think Etsy makes a stronger case as to why shoppers should buy from them.

I’ll give this competition to Amazon.

The Etsy slot is a rehash of a creative that is old and tired (“here’s to…”) and that’s too bad. Feels quite out of date. And the items they show don’t have much “Etsy” uniqueness about them. It works too hard turning Etsy into just one more store.

Amazon is clever, catchy and well focused on the box, delivery, Amazon employees, and people all coming together.

That said, I wasn’t comfortable with specifically how they animated the smile. Too often the viewer has to work hard to see the logo on the box as a mouth and remember it’s a gag around the smile.

It’s not surprising that Amazon touted their delivery via their now familiar singing packages more than any specific items. Interestingly the commercial didn’t mention free shipping or speed of delivery. The commercial had humor and features a theme that everyone can relate to. It does a great job in connecting with its core customers but does little to attract new ones.

The Etsy commercial focused on a few items and expressed that it provided free shipping. I believe it did a better job than Amazon’s spot on letting people know what Etsy and is reaching out to new customers looking for that unique gift.

You’re absolutely right about 90 vs 30. But in this case, Amazon didn’t really use their 90 seconds for very much. It’s essentially a 30 second idea stretched to 90.

And, sadly, Etsy kind of needs the 90 to get across their message — it feels quite crammed in and rushed — to where I don’t even really “get” what Etsy is all about.

So… It’s probably entirely fair here because Amazon uses the :90 so poorly. But your point is absolutely correct.

It’s Amazon for me. The emotion is brought out beautifully, with a neat ending to the story. It certainly delivered to the core segments. Etsy’s doesn’t stand out, and the voiceover was underwhelming.

The voice-over was underwhelming, but provided the education to acquire new customers.

They are both terrific ads. My preference is for the Amazon ad. Besides the 90 second ad, they have shorter versions running at different times and on different networks.

The concept of “Everybody” certainly captures the holiday gift giving season. Its catchy music and various scenarios and people appear to appeal to current as well as potential new customers.

Plus, for the purpose of full disclosure, I downloaded the Blues Brothers version of the song and play it constantly on my iPhone and IPad! Terrific song!

Quite the contrast: Retail giant for the mass market vs. advocate for authentic artists. Amazon’s spot implies that The Everything Store is also the Everyone Store with diverse expressions of love, affection and connection. The ad accentuates Amazon’s abundant variety and convenience as a “get ‘er done” destination that saves holiday shoppers time and hassles. Core customers already expect choice, speed and reliability, and new shoppers may desire these benefits, as there are fewer shopping days between Thanksgiving and Christmas 2019. Yet Etsy’s ad celebrates how “Small is Big.” One-of-a-kind gifts have grown in popularity for their unique sensory appeal that reflects individual tastes. Also, Etsy’s gift givers feel good for supporting artisans and their niche creations. It’s a timely message, as Small Business Saturday is a week away, and it positions Etsy as a “spread joy all around” destination for online shoppers. However, the audience seems to stick to Etsy’s core audience of young adults. Overall, Amazon’s Christmas spot gives it an edge for emotional appeal and expanded reach. (Plus, I’ll likely hum its… Read more »
4
|
0
-   Share

Both spots were well done and did a good job getting my attention. I thought the Amazon spot was way too long. It could have been shorter and done a better job keeping my attention. Etsy was right to the point and kept my interest. It is close as both were effective. My vote goes to Etsy this week.

Etsy gets my vote. Although Amazon’s commercial is very sweet and heartwarming, Etsy informs me about their products and inspires action. Amazon made me smile and feel good but lacked motivating encouragement to do anything except continue expecting to receive boxes with smiles on them.

Good luck to both in what will surely be a record-breaking year for online purchases and deliveries.

They are both good and similarly play off our emotions. Amazon’s appears to be a remake of the same creative idea from last year’s commercial with the talking boxes. They just changed the message from “Can you feel it” last year to “Everybody needs somebody” this year. I wish they would have come up with a new clever theme.

Based on that, I vote for the Etsy.

Well that was easy — by far the easiest decision I can remember making in this annual process! Etsy’s spots were crisp, clear and right to the point, telling us what they offer and then backing it up with specific examples (at least someone learned the lessons of Advertising 101!). The Amazon spot was the usual muddle of “how clever we are” distractions … the only thing I got from it was a desire to find out where that train is.

I’ll go with Amazon on this one, not just because of the singing, personified boxes are clever, but because they did a great job of humanizing Amazon via the people “behind” the boxes. Also, they made the joy of receiving a gift all about seeing an Amazon logo on a box rather than the actual gift item. The message is that getting an Amazon box gives you joy, almost regardless of the item inside. While Etsy’s ad was good, it feels too similar to other ads and doesn’t really convey enough about what makes Etsy different and unique.

Both spots were good and entertaining, but I look at how well they make me want to shop the store. With that in mind, Amazon gave me nothing. Happy boxes do not make me want to shop — and shop for what? They didn’t even give me any ideas of things people might be looking for this year — maybe something many would not know they could get from Amazon. For that reason, Etsy gets my vote and my 2 cents.

Braintrust
"When it comes to attracting more customers, I think Etsy makes a stronger case as to why shoppers should buy from them."

"Boy, tough one. I’ve gotta give it to Amazon though for pulling the heartstrings a little better."

"Etsy gets my vote. Although Amazon’s commercial is very sweet and heartwarming, Etsy informs me about their products and inspires action."