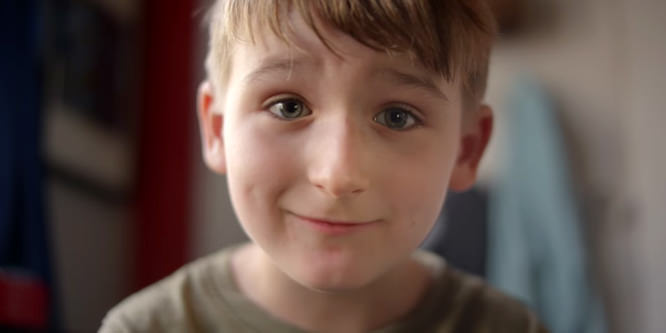 In week five of this year’s Christmas Commercial Challenge, we are putting up a spot from the department store chain, Macy’s, versus another from Target, a discount retailer that traces its roots back to the early sixties when it was opened by Dayton’s, another department store.

This week’s spots are unusual in that both run past the typical 15-, 30- and 60-second lengths typically seen on television.

Macy’s the “#SantaProject” uses interviews with small children and addresses internet searches that deliver results claiming Santa is not real. Macy’s invites viewers to go online and post photos, videos and social media messages that will “fill the internet with the magic of belief.” So far, Macy’s spot has over 3.65 million views on YouTube. The department store has tied in the effort with an invitation for people to visit social.macys.com/believe and write a letter to Santa. Macy’s is donating $1 to the Make-A-Wish foundation (up to $1 milllion) for every letter written.

Target’s “The Toycracker” takes a decidedly different approach with what it calls “a mini-musical spectacular.” The spot, which stars the Grammy winning recording artist, John Legend, and his wife, the model and actress, Chrissy Teigen, is a modern and very loosely based take on the story of “The Nutcracker.” It has generated nearly 3.5 million views to date on YouTube to date and is built around the story of a young girl rediscovering the true meaning of Christmas.

DISCUSSION QUESTIONS: What are your critiques of Macy’s “#SantaProject” and Target’s “The Toycracker” spots? Which does a better job of connecting with each’s core customers while reaching out to new ones?

"Although Target’s “The Toycracker” is way loo long, I sense it will have a long life on the internet and will be called a classic at some point."

"Macy’s wins. Not because it was a great commercial, but because Target was not a commercial. It was a short film."

14 Comments on "The RetailWire Christmas Commercial Challenge: Macy’s vs. Target"

I do like the Macy’s ad over Target’s message. First of all Target’s “The Toycracker” is too long and the message is too complex. Macy’s on the other hand is simple and more on-message to their theme even if it hints at being a commercial. I think more adults and children will connect with Macy’s vs. the infomercial from Target. Target may lose a customer or two!

Macy’s wins. What the heck was Target’s rap jam? That is not even related to Christmas. It is clearly from some writer who needed a job and the agency (which Target should fire) bought into it. The target market for that one? No idea. Christmas is a tradition and not a media event for crappy rappin’. Let the generations change, but Santa is still a tradition and a reason around Christmas for many kids — toss Target’s ad and let’s not ruin Christmas. Seems like Target was after a different target market — no mention of Santa, but Christmas was mentioned. What market are they after?

My vote goes to Macy’s for capturing the magic of the holidays without commercialization. It may be cynical, but as I watched the Target spot I couldn’t help but wonder how much money the retailer made from product placement in the video.

The Target ad was just too long. I lost interest way before it was over. Neither ad told me anything about the brand but that seems to be the norm these days. One I just don’t get.

The Macy’s ad was cute but certainly didn’t leave me wanting to rush out to Macy’s to shop.

Target’s spot is long and a blatant pitch for toys. The message of being together with everyone or with family only comes through if you watch the whole ad. Macy’s ad is about children believing and even offers a way to get involved by tweeting a story. The reference to Christmas on 34th Street and believing in Santa is subtle about its tie to Macy’s. I liked the Macy’s ad better.

Honestly, neither of these ads hit the mark for me. Sure, the Macy’s ad is a thoughtful idea and the #SantaProject is an interesting theme, but it does little to build brand awareness, generate increased loyalty or leave a lasting brand impression. From a pure feel-good standpoint, Macy’s wins.

Now for the Target ad. The theatrics of this elongated advertisement clearly distract from their intended message. Although I’m a John Legend fan and do want for people to “rediscover” Christmas, I’m afraid this spot leaves me scratching my head rather than applauding Target.

Although Target’s “The Toycracker” is way loo long, I sense it will have a long life on the internet and will be called a classic at some point. That doesn’t mean I like it or think it does a good job of connecting the brand with the audience; rather, it is a modern-day attempt at re-creating and making a classic relevant to a young audience.

Macy’s is a more traditional spot and uses the disarming power and innocence of children to powerfully connect the Macy’s brand to keeping the Santa story alive. It is an inspirational message full of hope and the need to believe. It is well done and effective.

From where I sit, the Macy’s spot resonates much more. However, if I were a 10 year old, I’m thinking the Target spot would be the one I’d replay more often.

Macy’s does it for me in this battle. I am a sucker for young children as used in this piece. It made me go back a “few years” to when I would ask how Santa was going to get into our house when we did not have a fireplace.
The Target piece was too long with too much happening.

Critique of Macy’s ad: Kids are cute, but the ad doesn’t connect with any real audience. Plus hard, in many cases, to understand what the children are saying.

Critique of Target ad: Doesn’t mention or show the name “Target” one time, even at the end. This, I believe, is totally unacceptable for any ad. However, the message is sensitive, and I know it will connect big time with my 10-year old granddaughter, who’ll watch it again and again to imitate and play the whole cast. Whether it will motivate her and her family to shop at Target is another question.

Macy’s wins. Not because it was a great commercial, but because Target was not a commercial. It was a short film. Eight minutes is not something was ever designed to fit the classic definition of a film based commercial, i.e. something at intended to play on TV. Macy’s may not have helped sell merchandise, but it did help reinforce the brand.

Macy’s wins for me — great vox pop with the kids so nicely done and right in the heart of the Christmas message. Target was pretty cool, and I can see young people enjoying it, so there is a chance as Mohamed Amer said, that it may develop a life on the internet. Target’s was too long, everyone agrees on that, but who knows, maybe they just invented a new longer category. It still intrigues me why the commercials have not caught on in the US as they have in the UK — John Lewis Christmas ad is currently at 23 million views.

Wait, those are commercials? I thought we all had short attention spans and we Twitter 30 characters to get a point across, no? Guess not.

I’ll say one thing, the whole “heart-felt” thing is already getting on my nerves! They had me at Apple, but when the discounters jump on the tearful bandwagon, sort of makes it less genuine in my book. Please just tell me what % I get off (like you usually do) so I can go hug my kids.

The Target commercial connects it to the brand, but a change in the palette and some copy can quickly render it a Toys “R” Us, Kmart, or even an Amazon message. It’s entirely too long and I’m not certain if parents or children will have the patience for the mini production. Macy’s is not that much better; we’ve seen this before. However, it’s always charming to hear children’s perspective of Santa and the message — when they get to it — conveys an interesting idea.

My opinion is that the Macy’s message connects with core customer base and will appeal to non-Macy’s consumers due to the clever idea. The idea itself has the potential of being shared by consumers, but the production could have been done better and could have become a seasonal viral message.

Macy’s “Santa Project” is cute, but sure to raise some eye brows and questions at home. Note sure this is a topic a retailer should be raising. Sad point is the tie-in with Macy’s is very weak and does not really bring their good works out. “The Toycracker” by Target is outstanding. From the no WiFi song to rapping on a Christmas theme was simply outstanding. Target has linking to the brand with the wall paper etc. Target gets my vote.

"Although Target’s “The Toycracker” is way loo long, I sense it will have a long life on the internet and will be called a classic at some point."

"Macy’s wins. Not because it was a great commercial, but because Target was not a commercial. It was a short film."