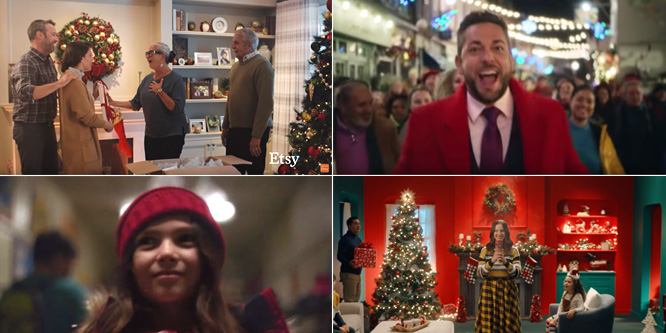 Christmas is past and retailers are dealing with returns from the holiday season while pushing out clearance items to finish the year strong.

From early reports, the 2019 holiday selling season was a positive one for retailers. Data from Mastercard SpendingPulse put the overall sales increase at 3.4 percent above 2018 with online growing 18.8 percent year-over-year.

With the holidays drawing to an end, it is now time for the RetailWire community to choose a champion from this year’s Christmas Commercial Challenge.

The retailers that came out on top in the five-week playoff were:

Etsy’s “Here’s to You” campaign captured 70 percent of the votes in its matchup with Amazon.com. RetailWire BrainTrust panelist Mohammed Amer said, “Etsy’s spot celebrates the moments filled with the joys of giving and receiving. The unique artisan character of their products shines through to emphasize their values and brand promise.”

Macy’s “Santa Girl” commercial was the favorite among 68 percent of those who cast a vote in the weekly matchup with Kohl’s. Casey Golden, another member of the BrainTrust, said Macy’s spot “embraced” the retail chain’s “heritage and modernized a play on the Miracle on 34th Street.”

TJX Cos. came out on top of Old Navy with 93 percent of the votes cast. A review by Saint Joseph University’s Richard George said the “Follow Me” spot featuring actor Zachary Levi “puts the viewer in the holiday spirit” and communicates a message of selection and savings to the audience. “Core or new customers can get the message and the spirit with this commercial,” he concluded.

Big Lots eked out a win over Best Buy in week four of the competition with fifty-four percent of votes cast. BrainTrust panelist Jeff Sward called Big Lots’ “Decorate Big. Save Lots.” spot festive and added that it “feels like Christmas.”

While BrainTrust panelists praised both Target’s “Thinking of You” and Walmart’s “Live Better. Together.” commercials, voters were clear in their preference for the former and its upbeat holiday message. Richard Hernandez, director at Affiliated Foods and a BrainTrust panelist, said, “The Target commercial is fun, the message of their offerings is clear, it’s bright, the Target dog is there and the music fits.”

DISCUSSION QUESTIONS: Which commercial do you think should be the winner of the 2019 RetailWire Christmas Commercial Challenge and why?

"I still like the Target commercial the best overall."

"I have to go with Macy’s. Virginia’s spirit, and her parents’ encouragement, would be a good thing to take into the new year."

16 Comments on "The RetailWire Christmas Commercial Challenge: The Final Competition"

Truth be known, I have always admired the U.K. Christmas commercials — so well-made but a lot of times they are aspirational and the message can be lost. U.S. commercials are to the point; you have a problem (getting my holiday shopping done), we can provide the solution. There were a lot of good commercials this season, but I still like the Target commercial the best overall. There is music, shopping options, it’s bright, fun and I am a fan of the Target dog… what’s not to like?

Thanks for this roundup and recap of the top five. Being able to review the winners all at once is a nice way to close the season. The hell with the numbers for just a moment. These winners help us remember the spirit of the season. And with that, I have to go with Macy’s. Virginia’s spirit, and her parents’ encouragement, would be a good thing to take into the new year.

Target for the Win! The spot makes a real connection with the audience, tapping into the season in a way that is not too over-the-top. The message conveyed aligns with the core brand beliefs and Target’s benefit proposition for the holidays resonates with viewers in an energetic manner. Happy Holidays!

For me, the Target spot takes the gold. It’s upbeat, inclusive, and is directed to the viewer. Macy’s story is TL;DR – too long and doesn’t have much of a payoff after two minutes of viewing time. The others fall somewhere in the middle – colorful and upbeat, but without a clearly differentiated message.

I have to go against what will probably be the choices of others. I understand we were given the choice to select what the results of the best of the best were during the buildup to Christmas. I have two choices for the best holiday commercial, neither of which are in our list of choices. First is Publix. Yes, they do not qualify but we do spend time during the course of the year discussing grocery chains. Publix annually has very moving family focused celebration commercials. Not only at Christmas; but other holiday periods such as Thanksgiving. My second choice is a commercial from a small independent hardware store with a young boy who filled many roles working in the store. This was as good a commercial as I have seen in quite a while. Now that I have given my off-list choices, I am giving my vote to Macy’s this season although I thought the spot was much too long. The Kohl’s commercial played so many times I was hoping it would go away… Read more »
3
|
0
-   Share

Publix always has great ads and this year was no different, Ed.

Macy’s! For hope, inspiration and goosebumps.

Full disclosure – I’ve been long known as a Christmas softie. Based on that alone it is no surprise that my personal vote would be Santa Girl (Macy’s) as it conveys what I hope is still seen as a key message for this season. However, if the question is really about which do I think would be most effective in driving traffic to stores, then I think Target barely edges out Big Lots in conveying its core value to customers.

Macy’s is my choices for the messages it brings. One regarding Christmas and the other showing you can be what you want to be. It just takes hope and sometimes a little help.

Although I voted for the TJX Cos. originally, I would vote for a tie between Target with its upbeat and and Inclusive nature and Macy’s for its nostalgia. Overall, some terrific holiday commercials.

The best nostalgia ad goes to Macy’s. While it is long, it is a great story of family and giving in the Christmas spirit. The best ad for getting people into the Christmas shopping mood and thinking of a retailer goes to Target for the catchy jingle and giving shoppers gift ideas without being pushy.

Macy’s — because anyone can show you they have the stuff you [may] want. It’s holiday time — give us the schmaltz and a cute kid.

It’s a close call between Macy’s and Target, with Macy’s getting the emotional heartstrings just right, but I’m giving the nod to Target for having the most upbeat spot that also captures the spirit of giving just the right way. It’s uplifting enough to make you feel better having watched it. But it’s a slight nod over Macy’s!

Based on theme, execution and product sales message I rank them this way: 1. Target, 2. Esty, 3. Big Lots, 4. TJX and 5. Macy’s. All were enjoyable, but selling products through a holiday message is not easy.

Curiously, this morning as I was driving to work I passed one of those “Xmas countdown” clocks, and as a hearty “HO HO HO!” resounded thru my head, I wondered how this (very gender specific) role would play out in the future. It seems Macy’s had the same thought, and I thought their remedy was well done. Unfortunately, though, while I thought the ad was clever and sweet, it was also a little a little too long (not to mention the unanswered question of why this family was giving out gifts around the neighborhood).

So I’ll go with the TJM spot. It was short, catchy and just “Christmas-ey” enough to avoid the trap some of the other “they-could-run-this-anytime” spots fell into.

Macy’s for the win — it evokes the magic and spirit of the season with a feel good message inspiring you to believe.

"I still like the Target commercial the best overall."

"I have to go with Macy’s. Virginia’s spirit, and her parents’ encouragement, would be a good thing to take into the new year."