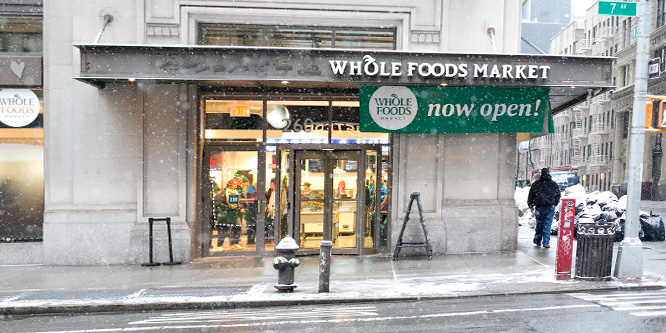 Whole Foods has opened a “bodega-like convenience store” in the Chelsea neighborhood of Manhattan, according to Eater.

The store, known as Whole Foods Market Daily Shop, includes self-checkout kiosks not commonly associated with the organic grocery chain. The product selection is focused on locally-sourced grab-and-go items including breads from Balthazar and doughnuts from Dunwell and Dough.

Allegro Coffee runs the store’s coffee bar, which also sells fresh juice and kombucha. Also present is an açaí bowl station with a wide variety of toppings. A small number of bar chairs are available for customers who want to eat in the Chelsea store.

This is not the first time that Whole Foods has experimented with concepts outside of its standard supermarket model. In January, the company announced it would end its test of the 365 by Whole Foods concept after it failed to produce the results management wanted.

The format was originally compared to Trader Joe’s with its heavy focus on Whole Foods 365 Everyday Value store brands. Given the private label emphasis, Whole Foods believed prices could be competitive with Trader Joe’s and conventional grocers that sell similar products.

In the end, Whole Foods management concluded that steps it has taken to dispel its “Whole Paycheck” image for its full-line stores since being acquired by Amazon.com were sufficient and there was no longer a need for the 365 concept.

DISCUSSION QUESTIONS: Do you think a convenience store concept in busy city neighborhoods makes sense for Whole Foods? What do you see as the challenges and opportunities facing Whole Foods Market Daily Shop?

Please practice The RetailWire Golden Rule when submitting your comments.
Braintrust
"One of the issues they will face is no different than one they face in their larger stores – price perception."

"The neighborhood 24/7 bodega has always been a NYC staple, and this new format Whole Foods convenience store is not a threat to those stores."

"The price perception goes in favor of Whole Foods as bodegas are ridiculously high priced, 50 percent to 100 percent higher than the conventional NYC supermarket."

17 Comments on "Wait … did Whole Foods just open a bodega on Manhattan’s Westside?"

This is my local Whole Foods when I am in NYC. The convenience store used to be a Whole Body concept which was separate from the main store. It was never busy and was substandard in terms of the offer and proposition, so it is not surprising it has been converted into something else.

The bodega format makes much more sense as it allows people to get in and out quickly and to buy things on the go. It is similar to the “coffee shop” format in the entrance on the first floor of the newer Bryant Park shop where you can get snacks and drinks without going into the main store.

All that said, the main store on 7th Avenue is a terrible shopping experience. Whole Foods needs to up its game there otherwise my suspicion is that some people will simply visit the bodega and not bother with the main store.

Whole Foods’ other larger grocery stores have struggled with right sizing for large cities such as NYC. Although Whole Foods has relatively smaller stores across various neighborhoods in NYC, the shopping center and experiences do not support the “grab and go” segment.

The neighborhood 24/7 bodega has always been a NYC staple, and this new format Whole Foods convenience store is not a threat to those stores. However, it’s much more of a competitive threat to to ubiquitous Duane Reade/Walgreens and CVS domination. Both stores have dabbled in the organic space, but their assortments pale in comparison to what Whole Foods could offer.

In a city that thrives on speed and convenience, we should expect the Whole Foods/Amazon team to open these locations across the five boroughs of NYC.

YES! you almost get the “what took you so long” feeling on this idea.

PS: SNL’s skit on the bodegas in NYC said it all — room for much better!

My question was whether it was staffed by the obligatory bodega cat?

That skit was hysterical.

It’s not a bodega unless you can buy a $5 umbrella when there’s a sudden rain shower.

Healthier, high-end products in a convenience setting is a no-brainer. This concept is proven to work in large cities and Whole Foods has played with a modified version of the concept in cities like London for a while (small footprint grocery, AKA convenience).

One of the challenges is that this format competes with local shops. “Your corner shop” is an important part of the community in larger cities. Whole Foods is smart though, they already understand the concept of bringing community into their store. I’m excited to see this idea through a smaller footprint lens.

There is so much to applaud here. I lived in Manhattan for 12 years and this store would have been most welcome. Traditional grocery + health/beauty + grab/go snacks and coffee. One stop versus several. Traditional grocery beyond bodega bananas and Doritos should be a big hit. The universe of Amazon testing and experimenting continues to expand.

Availability (of the right items) is everything (to the right audience). The item curation and branding of Whole Foods should play well in areas frequented by the middle/upper income shoppers working at urban businesses. But the traffic will drop off dramatically after business hours unless the store is in a strong upscale urban housing location. A restrained approach to site selection will be critical. There may be room for several hundred of these stores across major urban centers, but I don’t see several thousand. That may make efficient sourcing difficult.

Smaller formats in urban markets is the new focus of many retailers as noted in this week’s article on Aldi Local. Its selection of locally sourced items provides the customers with known brands and is likely to appeal to its target market.

Given its grab and go emphasis the addition of the self-checkout is a definite plus. Their average shopper is likely going to want to be in and out in less than three minutes. One of the issues they will face is no different than one they face in their larger stores – price perception.

The convenience store in active and/or congested residential areas makes sense for many demonstrable reasons. The better question is if Whole Foods can tune into the demographics on a per store basis and make them applicable. Hiring store managers that are location savvy is a must have but only half of the equation. A separate group of fast reacting buyers, planners and allocation professionals is equally important. Amazon has no practical understanding of this level of retail management exercise and will likely fail as they expand using cookie cutter methodology.

Running small convenience stores is a difficult business and requires different skills than running full size and full range stores. Getting the right mix of items and what to stock at different times of the day can be tough but also the supply chain implications of little space, regular deliveries into the central locations that often have restrictions on size of vehicle can be tricky. Whole Foods is in a great position to make this work from a customer facing point of view. Office workers who have a higher average income and are health conscious will frequent a local Whole Foods and not need a full range store. They are snacking, picking for today’s meal and not looking for a big shop. In fact, I was in the Whole Foods near Piccadilly Circus in London last weekend and could not work out why they were selling ice cream and frozen foods. There are very few people who live close enough to Piccadilly Circus to get frozen items home in time to make this viable. This… Read more »
1
|
0
-   Share

I agree with most of my colleagues — the perfect idea. More and more the importance of convenience to today’s lives is being understood by retailers. Unfortunately, many supermarkets still put milk at the back of the store so people must walk through the entire length of the store to get a container. No convenience there.

A couple of weeks ago we wrote about Target’s convenience efforts, without much enthusiasm. This beats it by a mile and more.

And finally, the price perception goes in favor of Whole Foods as bodegas are ridiculously high priced, 50 percent to 100 percent higher than the conventional NYC supermarket. (Yes, people pay a lot for convenience.) And the likelihood of finding anything healthy in a bodega is almost nil.

I think you’ve nailed it, Gene, about convenience, or lack thereof, in most grocery store layouts. I’ve been saying quite a bit lately how the grocery segment as a whole needs to re-evaluate store layout and focus more on convenience with a thought towards how, not just what, customers are shopping for. This new Whole Foods format does just that and I’d expect it to do well in Chelsea. Will be interesting to see if more of them appear in other cities around the U.S.

The Whole Foods Market Daily Shop concept is an interesting test, as it seems like it might potentially compete with the 3,000 Amazon Go stores that Amazon plans to open by 2021. Maybe Amazon is rethinking the viability of 3,000 Amazon Go stores, which was a claim I have a hard time getting my mind around. I can’t imagine that the ROI is viable on the cashier-less store concept unless the cost of all the cameras and AI technology decreases significantly.

Amazon is testing a lot of concepts and will replicate those that are successful. What is next for Amazon? Maybe a restaurant?

Another beach head in food retail. Seems they are coming fast and furious lately, with Amazon demonstrating a laser focus right now on food/grocery — especially in the physical realm. The acquisition of Whole Foods provided a source to gather more customer insights, observations, propensities to test and learn in a large scale brick and mortar theater and give new multi-channel experiments a try. Simultaneously, with the launch of GO, enabling “store of the future” type brick and mortar test and learn, bringing new technologies to the forefront to continue to push the “edge” via IoT and streaming analytics. All while stating (yet) another new grocery store concept (TBD) on the horizon, whilst building out core food private label products (milk, etc.). Seems clear that Amazon is launching a multi-front assault on the food retail sector right now … and with seemingly unlimited capital and patience to test new concepts, learn, improve. Some concepts will be winners, some will need to be tweaked, but the insights are priceless when playing the long game.
1
|
0
-   Share

A trusted brand … that is where it starts. And, when you go to Whole Foods, Prime members feel like they belong. Great opportunity for the right market.

Braintrust
"One of the issues they will face is no different than one they face in their larger stores – price perception."

"The neighborhood 24/7 bodega has always been a NYC staple, and this new format Whole Foods convenience store is not a threat to those stores."

"The price perception goes in favor of Whole Foods as bodegas are ridiculously high priced, 50 percent to 100 percent higher than the conventional NYC supermarket."