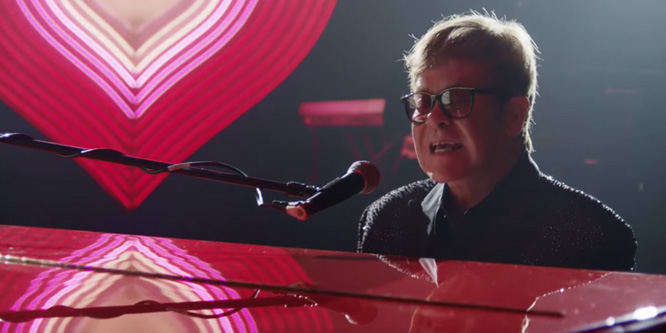 John Lewis and Waitrose are sister companies, but that isn’t keeping the latter from apparently dissing the former in its Christmas commercial.

The highly-anticipated John Lewis spot — it currently has more than 9.8 million views on YouTube — is crafted around the idea that gifts have the opportunity to change lives. In this case, the changed life is Sir Elton John’s, whose hit, “Your Song,” is featured on the soundtrack. The 2:20 spot — “The Boy and the Piano” — is intended to tug at the heartstrings ahead of Christmas. Big on emotion and short on the sales pitch, the commercial is the department store and Sir Elton’s gift to viewers, whether they shop at John Lewis or not.

The Waitrose commercial — “Fast Forward” — takes up with a daughter anxious to share the emotion of the John Lewis spot with her parents. A few seconds in, however, the girl’s father takes the remote control at his wife’s urging so they can fast forward through the commercial. When they get to the end, the couple hurry off to eat a dark chocolate and orange stolen wreath from Waitrose while their bewildered daughter tries to figure out why her parents just crushed what could have been a “moment” for them all.

With over 186,000 YouTube views, the Waitrose spot is not likely to draw much attention away from the John Lewis commercial. As sister companies, it was clearly part of the plan for the Waitrose spot to poke fun at the sentimentality of “The Boy and the Piano.” It does beg the question, however, whether this was a smart strategy that would benefit Waitrose without detracting from John Lewis’ Christmas messaging.

DISCUSSION QUESTIONS: Do you think the way Waitrose tied into “The Boy and the Piano” spot was a wise strategic move for its business? Does “Fast Forward” detract from John Lewis’ message at all?

Please practice The RetailWire Golden Rule when submitting your comments.
Braintrust
"It's always productive to be able to laugh at yourself. Makes you real ... Good work."

"...the Waitrose spot is clearly a one-view commercial. Once you’ve got the joke it isn’t going to get any funnier the second time around."

"Putting my agency hat on, these spots are clearly very different target audiences and creative briefs — but how fun that they ping off each other!"

This was clearly planned a long way in advance and is a smart move by both firms.

Waitrose’s spot fits in with its marketing theme of people hurrying through holiday activities in order to eat Waitrose treats – there are other adverts in the series that don’t feature the John Lewis commercial.

As well as getting some amplification from Waitrose, John Lewis responded to its sister company on social media with a series of light hearted tweets. It went down well with customers.

There is massive overlap between the two firms in terms of shopper demographics and audiences so this is a very joined up campaign.

John Lewis’ Christmas ads have become “must see TV” – introduced with a lot of fanfare and commentary. Waitrose’s take is a great parody and part of what makes it great is the reverance for the John Lewis ads. Great idea and no damage to the John Lewis message.

This has to have been strategic. They actually complement each other brilliantly. Both ads have a clear social sharing component and both speak well to their brands.

The John Lewis spot was an excellent video with great ideas, editing, and outstanding production. It was warm and had a heart. However it is far from an ad, and I don’t see it as a way of pushing direct sales. It does leave you feeling good and remembering John Lewis so from that standpoint it was successful. The Waitrose commercial was more of an ad with cheap humor and just based on the difference of views, apparently people are not that impressed. The Waitrose commercial was smart in some ways but making fun of a warm-hearted message is where they went wrong. So to me, it seems they spent significant money on both ads with most likely very little return on their investment.

Personally, I loved both. John Lewis really hits it with the sentimentality and associating it to their brand. The Waitrose ad is just hilarious. The smart aspect of this is that someone was bound to come out with a dis on the John Lewis commercial. From that perspective, better to keep it in the family and leverage the extra views with a friendly jab. It isn’t going to hurt the John Lewis commercial. If anything it will increase the views based on the mild controversy (similar to the article above).

If anything, this was a great way to milk attention and brand associations further. I think this was genius.

I agree with Neil. Putting my agency hat on, these spots are clearly very different target audiences and creative briefs — but how fun that they ping off each other! The John Lewis spot is utterly sublime, the other funny and tongue in cheek. Good work folks.

This is a perfect example of Waitrose leveraging its sister company’s ad investment and treating the video spot as a social event and a topic of discussion. Waitrose takes a more practical view of the holidays by inviting you to indulge and take comfort in the immediate gratification of feel-good food in a fast moving world. It reminds me of the vintage 7-Up commercial urging you to “enjoy, don’t analyze.”

This is all very smart, well-planned and brilliantly executed. I wonder what else they might have in production?

Too funny. Waitrose achieves two things simultaneously with this one. They increase the number of views for their sister company John Lewis’ spot (I mean who could resist checking out the Elton John spot after seeing the Waitrose commercial?) and they strategically drain the “smarm” response that many of their younger target audience (i.e.: the daughter in the Waitrose spot) might have given that they barely know who Sir Elton even is. The biggest risk with highly emotional advertising is the possibility that your audience may not react the way you hope. This sister effort takes the sting out for those in that camp while boosting audience and acceptance with a clever twist. It’s always productive to be able to laugh at yourself. Makes you real… Good work.

I agree with others who have said this was strategic and planned. However, I must add I enjoyed “The Boy and the Piano” spot much more than the “Fast Forward.” I am not sure the Waitrose spot would entice me to buy what appears to be a delicious product.

I agree with Jeff. The Waitrose commercial does not negate the John Lewis commercial, but rather it emphasizes food in negation of the holiday altogether.

The John Lewis spots have become an anticipated holiday event — as supported by over 10 million viewers to date for this year’s installment. Given its established success, the creative agencies have been able to leverage the Waitrose parody that works. Given the number of viewers to date for the Waitrose ad, I suspect the real winner for this strategy is the ad agency as this will be their entry for the British Arrow Awards. Agencies live for those awards!

Let me reverse the order of the questions. I don’t think the Waitrose spot hurts, “The Boy In the Piano,” at all — and the relative number of views seems to confirm that. And we are talking about England after all where the cultural humor models are … well let’s just say different than they are in the U.S. So I guess it comes down to a simple question, “Is it better to use media to show you have a sense of humor or to send a more focused message?” Again, this is the U.K., so the answer isn’t obvious. I guess my bottom line is that people might watch “The Boy and the Piano,” more than once, but the Waitrose spot is clearly a one-view commercial. Once you’ve got the joke it isn’t going to get any funnier the second time around.

Really great. But I have to say, we should never leave it up to Americans to criticize British humor. We didn’t inherit enough of it from them, unfortunately. Funniest people on earth. Well played.

This is a smart little tie-up between the two brands. John Lewis must realise that not everyone is in love with its Christmas ads, even if they have become a holiday staple, so gently poking fun at them via its sister brand is a great way to get those people on side. It also cross-promotes John Lewis to Waitrose customers, and ensures that its ad is seen as widely as possible. It’s a clever strategic move and one that paints both brands in a good light.

My thought is that it’s a tie-in only to the extent that one is familiar with the JL spot … it can be viewed as a stand alone spot as well, which is how I think most of the commenters here would view it, since they’re not in the UK and would be unfamiliar with the former (but for it being shown here).

As for the Lewis spot — not that it was asked, but I find it hard not to comment: we’ve seen criticism here about (seemingly) self-indulgent ads done more as vanity projects from the agencies than as effective marketing, and I think we have the apotheosis here.

Braintrust
"It's always productive to be able to laugh at yourself. Makes you real ... Good work."

"...the Waitrose spot is clearly a one-view commercial. Once you’ve got the joke it isn’t going to get any funnier the second time around."

"Putting my agency hat on, these spots are clearly very different target audiences and creative briefs — but how fun that they ping off each other!"