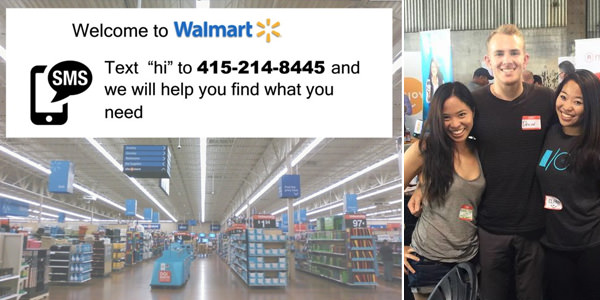 Through a special arrangement, what follows is an excerpt of an article from Fierce Retail, an e-newsletter and website covering the latest retail technology news and analysis.

Walmart could soon roll out a new mobile feature that lets shoppers access customer service in stores through a simple text. Simple Text is, quite simply, a virtual personal assistant for Walmart shoppers and helps locate items inside stores.

Shoppers text "hi" to an identified phone number, 415-214-8445, and are then greeted by a Walmart associate via SMS directing them to the item of their choice in precise detail. For more complicated or nuanced questions, shoppers will be directed to a live customer service agent.

The retailer attended TechCrunch Disrupt Hackathon in San Francisco in mid-September and opened up its APIs to more than 600 hackers and offered prizes for top retail solutions. On its blog site, WalmartLabs said Simple Text’s hackers won the first-ever #WMTCode hack over a dozen submissions "because it simplified and elevated the customer experience with an easy to use solution."

The winners won $5,000 and earned the chance to test Walmart Simple Text in one Walmart store.

The hacker team was driven to create the app out of frustration with the size of enormous discount stores and supercenters. "It’s such a huge store," hacker Rachel Tsao told TechCrunch. "I want to get my hot Cheetos and get right out," said fellow hacker and team member Clara Tsao.

The team chose SMS over integrating the feature into Walmart’s native app to reach a wider assortment of shoppers. "The demographic of large stores was our inspiration; most users don’t know how to download apps or they don’t know how to find an app," Ms. Tsao said. "Plus, asking them to use their data plans is a big part of it. We really wanted something that helped them find what they need and it’ll drive them to the app."

Driving shoppers to the app is the goal of many retailers and it’s likely to be Walmart’s, as well. But the retailer has always been adept at not focusing on technology for technology’s sake. Rather, Walmart has a very clear customer profile and is creating services and products to meet the needs of that shopper.

How much appeal will Simple Text have for in-store shoppers? Does it make sense to use a virtual customer-service assistant as a text messaging feature rather than integrating it into Walmart’s native app?

Please practice The RetailWire Golden Rule when submitting your comments.
Braintrust
"Unlike brand-specific apps, the use of SMS messaging is easy and direct — the shortest distance between interest and inquiry and the answers needed to continue and fulfill their shopping journey. Apparently Walmart understands this as well."

"The devil is in the details of how quickly this system will actually connect shoppers to products. If it is minutes as opposed to seconds, it will likely go unused."

"I wonder if the Walmart customers who don’t want to download an app are the same ones who would rather ask for help in person than send a text message. This is the beginning of a good idea, but I am not convinced that this is the best use of the service."

” … asking them to use their data plans is a big part of it.” Seriously? To find hot Cheetos quickly in a mega-store. Is this their customer?

The more you text for service, the less service is needed by floor workers, the more cold the shopping becomes. The trend of dehumanizing the shopping experience via technology continues to grow in tandem with lower traffic.

While I have never experienced a lack of help in a Walmart store, this would be a great tool to have while shopping in any store but especially the larger Walmarts and stores like Meyer. It would be easier to use the SMS feature because it is better than having to download the store app. If we downloaded every store app our phones would be overloaded. So I do think just an SMS for simplicity is better for the consumer.

As well-designed as Walmart’s native app is, Simple Text’s simplicity and efficiency will come through much more clearly as a standalone. Walmart’s service levels vary greatly depending on location — I’ve received some of the best and worst service ever within Walmart stores — so the shopping assistant could have the unintended positive effect of training associates to be more responsive. The shopping assistant supports Walmart’s multi-faceted associate and store-focused initiatives.

Simple Text could be a plus for Walmart if it can quickly direct consumers to the exact items they are searching for. On the other hand, sending a text and being directed to a sales associate is a waste of time. Driving customers to the Walmart app may be good for the chain, but how will it benefit consumers? Too many retail apps are just alternative sales channels, rather than being valuable and meaningful for consumers.

The use of Simple Text is just that — simple, and as such is very attractive to shoppers. It is also another case study to support the fact that in-store shoppers don’t consistently open specific apps. The mobile experience for in-store shoppers needs to be driven by value and simplicity. Shoppers don’t want to be coerced, ensnared or blackmailed in marketing databases in order to reach a goal or get more information.

Unlike brand-specific apps, the use of SMS messaging is easy and direct — the shortest distance between interest and inquiry and the answers needed to continue and fulfill their shopping journey.

Apparently Walmart understands this as well, as they selected this as their winning application.

It would be interesting to know the age of the developers.

I think it’s a great option that should complement their mobile application and consumer engagement strategy. Five years ago I worked for a company that provided in-store SMS customer service for Sears customers. The beauty of text messaging is that it’s such a common consumer mobile task that it doesn’t require a lot of interpretation by the consumer to utilize. The channel also can embed short URL links to mobile web sessions to visualize an offer, coupon or product information, plus request permissions for bi-directional communications going forward. It should also present a channel to promote downloads of their mobile apps where shoppers can register and provide richer details about their preferences.

This represents yet another thing a shopper must do during their store visit. The technology is not in question, nor is its theoretical use to help shoppers find what they are looking for. The devil is in the details of how quickly this system will actually connect shoppers to products. If it is minutes as opposed to seconds, it will likely go unused. If it doesn’t work for the shopper due to time investment, inaccuracy, or complexity, it will be another piece of great technology that created more of a problem than it solved.

Just as a curious side note. With all of this new customer-facing technology, why can’t Walmart associates on the floor receive an SMS message when popular products are running low or out-of-stock? In my view, that would enhance the shopping experience at Walmart and many other retailers far more than a product locator. Just saying.

I wonder if the Walmart customers who don’t want to download an app are the same ones who would rather ask for help in person than send a text message. This is the beginning of a good idea, but I am not convinced that this is the best use of the service.

The product locator means nothing unless Walmart continuously maintains accurate and current information on every store layout, planogram and inventory condition. They can’t seem to do that very well now, so how well will an SMS message help shoppers find items and make choices? I’d call this an imaginative novelty that will appeal to Silicon Valley types but not to mainstream family shoppers.

I say trust Walmart’s decision and their statement “because it simplified and elevated the customer experience with an easy to use solution.”

Twitter and WhatsApp grew because of SMS alternatives or mixing services with SMS. SMS nowadays have APIs that can read an incoming message and perform a lookup and return with information and Millennials like to text a lot. This is a perfect solution.

I’m proud because I see a lot of retail hackathons where coders try so much NFC and Augmented Realty stuff and QR codes when someone decides to just use good ol’ SMS.

WeChat in China, a standalone messaging app has proven out how messaging and businesses might/will interact. Facebook is following suit. Messaging apps are or are becoming platforms that third-parties can access via APIs. I wouldn’t doubt that Walmart is moving in that direction—it’s old hat here in the land of Cheetos.

You still get run over (even if you are the biggest) if you are not moving forward. Kudos for Walmart following the KISS principle to test an alternative to give consumers choice. And this one is focused on conversion.

While simple text is not elegant or sexy like many other technologies, it simply works across a wide variety of platforms. And most customers, including Walmart’s core, have SMS as some part of their existing data plan.

Research shows that customers only use about 5 phone apps. SMS doesn’t require that an app even be installed. The key is whether Walmart can work to make it’s execution: a) reliable, b) efficient, and c) accurate.

Results count … everything else is conversation. The great thing this SMS test—it is very measurable. Customers will vote quickly with their phones.

I’m loving this idea! It is true that so many folks don’t understand about downloading apps and what they are for and I would guess this may hit the nail on the head with the typical Walmart shopper.

If Walmart is going to put banners around the stores so customers can easily see how to send a text, this has great promise. Can’t tell you how many times I have been frustrated in Walmart stores because I can’t find what I’m looking for. And guess what? They NEVER seem to put stuff where it logically belongs.

Just sayin’ for my 2 cents.

This is a sound Beta test approach that will allow the company to make necessary improvement changes faster and without interfering with the mainstream systems. This should generate a lot of quality information technology data for implementing new technologies to both the brick and mortar and e-commerce sides of the business simultaneously.

Simple Text is the start of a better way to ask for help, but all that Walmart has to do (and should be doing) is place large panel touch screens throughout the store so that anyone can type in the name of a product (or simply say it) and it will show the aisle and location of the product. No phone required, and this would be a low-cost, easy to use (and see) solution throughout any store!

Braintrust
"Unlike brand-specific apps, the use of SMS messaging is easy and direct — the shortest distance between interest and inquiry and the answers needed to continue and fulfill their shopping journey. Apparently Walmart understands this as well."

"The devil is in the details of how quickly this system will actually connect shoppers to products. If it is minutes as opposed to seconds, it will likely go unused."

"I wonder if the Walmart customers who don’t want to download an app are the same ones who would rather ask for help in person than send a text message. This is the beginning of a good idea, but I am not convinced that this is the best use of the service."