What will former Nordstrom exec do for Target’s merchandising? 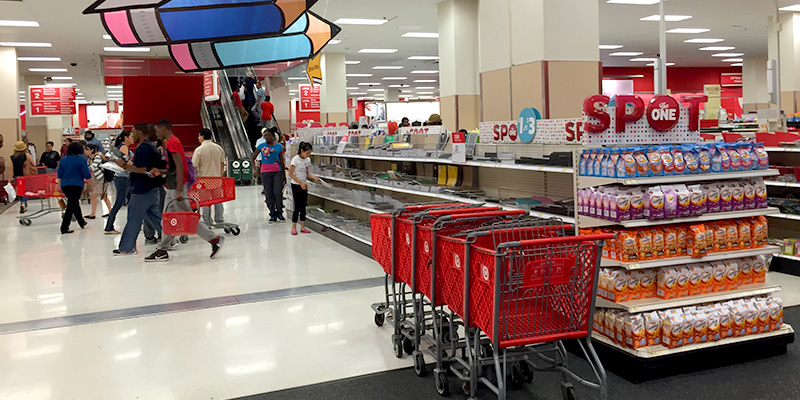 Is CEO Brian Cornell planning to take Target in a more upscale direction? That’s one of the logical questions coming out of yesterday’s announcement that Target has hired Mark Tritton, a former Nordstrom executive, as its new chief merchandising officer after a nearly year-long search.

In his new role, Mr. Tritton will oversee buying, product design and development, sourcing and visual merchandising for Target. He has been charged with transforming the company’s merchandising and operations.

“Over the past year, we’ve undergone an exhaustive search for a chief merchant, and I’m confident that Mark’s experience and passion make him the right fit for Target’s business and our team,” said Mr. Cornell in a statement. “He’s a bold, decisive leader, and he’ll play a critical role in guiding Target’s merchandising authority across all channels, ensuring we meet the ever-evolving wants and needs of our guests.”

Mr. Tritton was president of the Nordstrom Product Group where he oversaw merchandising, design, manufacturing, marketing and omnichannel distribution of more than 50 private labels across Nordstrom’s full-price department stores as well as its Rack outlets. Before Nordstrom, Mr. Tritton worked in leadership positions at Timberland and Nike.

In addition to Mr. Tritton’s hiring, Target also announced that Jason Goldberger has been named chief digital officer and president of Target.com. Mr. Goldberger has been charged with enhancing Target’s digital experiences as well as developing new capabilities in the newly created position.

Mr. Goldberger joined Target in 2013 after stints at Gilt Groupe, Hayneedle.com and Amazon.com.

DISCUSSION QUESTIONS: What do you think the hiring of Mark Tritton from Nordstrom will mean for Target’s merchandising strategy? What will the creation of the chief digital officer position mean for the retailer?

Please practice The RetailWire Golden Rule when submitting your comments.
Braintrust
"I see it more as an effort to better handle some of the basic needs of any retailer — keeping stores properly stocked and making it easier for consume"

"I just sat in on the Target earnings call. Their goal with both hires is to get digital and store channels more in sync."

"The move emphasizes the importance of digital as a unifying principle for Target and for retailing in general."

9 Comments on "What will former Nordstrom exec do for Target’s merchandising?"

I just sat in on the Target earnings call. Their goal with both hires is to get digital and store channels more in sync. Apparently there’s another new version of the website coming out shortly (Danger, Will Robinson!) and definite hopes for synergies across channels.

I am amazed at the goodwill Target has maintained with its customers. They are expecting a down Q2, but then expect to regain trajectory in Q3.

Hiring Mr. Tritton could have a positive impact at Target. Hopefully this will mean that Target does a better job of keeping items in stock. Nordstrom has always been a good example of how to build a strong omnichannel presence. Target needs help in that area as well.

Mr. Goldberger will hopefully be able to help build that omnichannel strategy by bettering Target’s website and digital efforts.

Neither of these hires necessarily means that Target is trying to move in an upscale direction. I see it more as an effort to better handle some of the basic needs of any retailer — keeping stores properly stocked and making it easier for consumers to shop.

I expect the primary expectation is to get the “channels” in sync as one consistent and uniform experience for their customers. The move emphasizes the importance of digital as a unifying principle for Target and for retailing in general.

I am excited to see what happens. Sounds like a very good move on Target’s part. Good luck and all the best, Mr. Tritton. For my 2 cents.

And for our part, we would like to welcome Lee to the BrainTrust panel! Lee, you have been a great contributor to RetailWire for years, so great to have you officially on board.

I don’t know enough about Mr. Cornell to make authoritative statements, and I certainly wish he and Target well, but I can’t help but be nervous about the sense of deja vu this invokes. Struggling mass marketer hires wunderkind from upscale retailer to “turn things around”… what does this sound like?

Target’s problems are well known and simple (if “simple” is the right term for the core of your business): security/data issues, inventory control, (seemingly perpetual) confusion about their grocery segment … shouldn’t the family car be put in order before new directions are pursued?

At Shoptalk this week, Target exec Casey Carl said: “Our biggest problem is how do we add metadata around every customer, so we understand them better? Getting the data is only step one, putting that data to use to create great experiences for the customer is the real magic.”

Tritton seems like a great hire to make this happen, and to help solve one of Target’s biggest problems: out-of-stocks, with no information for disappointed shoppers on new availability.

These hires are in direct response to some of the negative publicity Target has received in recent years for issues relating to target.com crashes and stock outs in their brick and mortar locations. With seasoned pros at the helm of merchandising and digital, Target is hoping that these recent issues are a thing of the past. These new C-Level leaders will pull on their previous success and employ tech-savvy strategies to improve the Target customer experience both in store and online.

This could be a great move in terms of getting to a seamless omnichannel experience. I don’t think it’s an indicator of Target trying to move into a more upscale market, but rather a sign that omnichannel initiatives have really become a priority (which is a smart move).

"I just sat in on the Target earnings call. Their goal with both hires is to get digital and store channels more in sync."

"The move emphasizes the importance of digital as a unifying principle for Target and for retailing in general."