What will happen when Grocery Outlet takes things public? 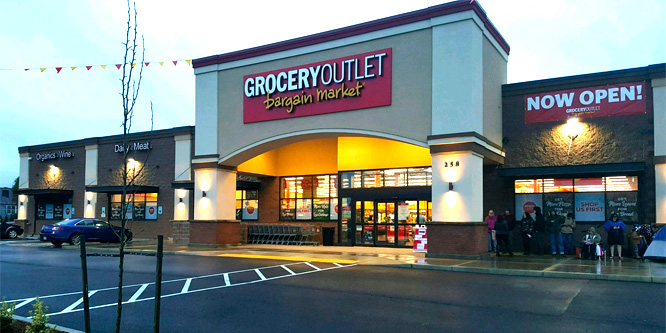 Grocery Outlet has kept its customers happy with low priced groceries for more than 70 years. Now the chain will see if it can please Wall Street, as well.

The grocer has filed for a $100 million initial public offering, according to a CNN Business article, which pointed out that, unlike companies involved in many of this year’s high-profile IPOs, Grocery Outlet is actually profitable. The chain’s opportunistic buying strategy, which consists of acquiring overstock inventory left with its 1,500 suppliers, and small store format (the typical unit is about 15,000-square-feet) allows it to keep prices at around 40 percent that of regular grocery stores.

The low-price grocery and dollar store space has continued to boom in the aftermath of the economic recession with customers of all demographics focusing on deals even in a period of recovery.

Some, like Dollar General, revamping their operations and rolling out new, cleaner, smaller and more inviting store concepts to keep pace with the demands of the Millennial shopper. Aldi has likewise taken steps such as adding larger fresh food sections and better lighting in some locations to look less like a deep discounter and more like a traditional grocer.

The recent entry of German grocer Lidl, which has a global rivalry with Aldi, to the U.S. low-price grocery market has added another wildcard to the mix. Lidl is planning a 25-store expansion on the East Coast in the coming year, according to a separate CNN Business article. This will bring the chain’s U.S. store count up above 100 in 2020, which represents a slowdown in the grocer’s planned expansion timeline.

While much of the IPO news of recent months has centered on rideshares (Uber and Lyft) and other startups without time-tested business models, other more traditional retailers have gone public as well. Levi’s, for instance, was once publicly-traded but went private for more than 30 years before announcing a return to the stock market with a $6.7 billion IPO this spring.

DISCUSSION QUESTIONS: What challenges will Grocery Outlet face as it goes public and works to significantly grow its store footprint? What will a larger Grocery Outlet presence mean for other food retailers?

Please practice The RetailWire Golden Rule when submitting your comments.
Braintrust
"Raising capital on the fickle public markets and the distraction/pressure of delivering quarterly earnings is not for the faint of heart."

"I do think the opportunistic business model is different from mainstream discount rivals..."

"Opening a lot of stores rapidly will likely add new challenges from a distribution perspective."

5 Comments on "What will happen when Grocery Outlet takes things public?"

Two words: competition and low margins. Grocery Outlet’s results are good, and their store concept appears to have found a following, however the grocery category is hyper competitive and the extremely thin margins make rapid growth a challenging endeavor. I understand management’s aspiration to grow their successful concept, but raising capital on the fickle public markets and the distraction/pressure of delivering quarterly earnings is not for the faint of heart.

Many of the locations where Grocery Outlet operates are less saturated with discount and dollar stores. The danger is that this will change over time, and that the chain will bump up against rivals more should it elect to expand geographically. That said, I do think the opportunistic business model is different from mainstream discount rivals and that should provide some protection to margins and a point of differentiation in terms of what is offered to the customer.

If they are growing and profitable, where’s the need to go public and have to deal with the hassle? I’m not sure the benefits of accelerated growth outweigh the quarterly earnings pressure. Once you’re on the main stage, the game changes.

Opening a lot of stores rapidly will likely add new challenges from a distribution perspective. They will also face awareness challenges for new markets where consumers are not familiar with Grocery Outlet. In addition, there is constantly more competition from Aldi, Lidl, and dollar stores which are expanding with more focus on grocery. Grocery is one of the most competitive segments and new entrants will make it even more competitive.

Grocery Outlet is on a roll and hopefully they remain focused on what has made them successful.

Maybe I’m misinformed — just what you want to hear at the beginning of a comment, right? — but my understanding was that GOs are franchises, so I’m not sure how this will work.

But leaving aside that admittedly rather fundamental issue, their business model (low prices thru odd lot and excess inventory, with locations that are either out-of-the-way or shuttered “big name” stores) places a limitation of how big they can grow. And let’s face it: the entry of even more players into an already crowded field means it’s very unlikely any of them will become a significant player … many won’t make it at all.

Braintrust
"Raising capital on the fickle public markets and the distraction/pressure of delivering quarterly earnings is not for the faint of heart."

"I do think the opportunistic business model is different from mainstream discount rivals..."

"Opening a lot of stores rapidly will likely add new challenges from a distribution perspective."