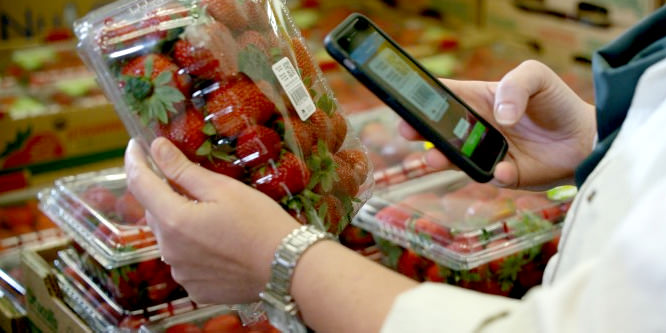 A new Sam’s Club opening on July 21 in Columbia, SC will be one of the first Sam’s in the country to offer Scan & Go shopping.

The Scan & Go mobile app promises to make members’ checkout process faster and more convenient by allowing shoppers to scan UPC codes on items as they load them into their carts. When done shopping, customers pay directly on their phone from anywhere in the club and bypass the checkout line.

Unfortunately, Scan & Go-type technologies seem to be in continual trial mode despite the promoted advantages of walk-around budget monitoring and speedier checkout.

In 2014, Walmart introduced Scan & Go in 200 stores but ended the test because shoppers couldn’t figure out how to use the service. Kroger has been testing “Scan, Bag, Go” scanners since 2009 and last year began testing an app version.

Shop & Stop and Giant Food have by all indications been testing the technology the longest in the U.S., rolling out handheld scanners at select stores since 2008 and introducing a Scan It! app in 2013. On Google Play, however, the Scan It! From Stop & Shop earned a mediocre 2.9 out of five stars from 647 votes, largely due to execution issues. A primary complaint is that the app needs to connect to the store’s Wi-Fi and fails to do so. A particular frustration is losing a fully-scanned shopping cart to a lost Wi-Fi connection. Certain smartphones are not compatible with the Scan It! app.

Sam’s Scan & Go, which currently only works with iPhones, is so far working more smoothly, scoring a perfect five rating from 243 votes on iTunes.

“I love it!!!!,” said one reviewer. “Everything worked perfectly and all my products were recognized with no problems. You check out and head to the door. Everyone else was waiting in line, not me! Skipped it all together. Please make one for Walmart!!!!!”

DISCUSSION QUESTIONS: How highly would you rate the shopper appeal of marrying scanning technologies and mobile checkout? Are execution issues rather than consumer demand largely holding back the expansion of scan and checkout technologies at retail?

Please practice The RetailWire Golden Rule when submitting your comments.
Braintrust
"This solution needs to work nearly flawlessly to be viable and, the article shows, the technology and processes are nowhere near ready yet."

"I love the concept, however user error and theft keep popping into my head."

"I think using your app on a phone is a no-brainer for consumers, but I’m not sure for grocers."

User error is always a key issue with new apps, however we must be sensitive to who goes grocery shopping (women) and the lack of understanding of apps and lack of desire to scan products on your phone while shopping. This is a solution looking for a problem. For the cost of implementation, the retailer could just as easily add an additional cashier or two (and increase customer service)!

The idea of Scan & Go is appealing, but this devil is certainly in the details. This solution needs to work nearly flawlessly to be viable and, the article shows, the technology and processes are nowhere near ready yet. Shoppers are willing to perform the cashier’s job in order to avoid standing in line, but they have to be positive that they will have a successful checkout experience.

There is no reason why shoppers of tomorrow would not embrace and adopt the Scan & Go technology, other than product not always being scannable or the app itself not working correctly. Scan & Go — if it is working correctly — is yet another improvement upon the customer experience. For many of us consumers, standing at the checkout line waiting for that venerable older lady to start opening her change purse at the very end of the bagging process to begin looking for crumpled bills and exact change is not the best use of time and not a pleasurable experience. Any application of technology that speeds up and streamlines the process and is accurate will surely win the day.

I love the concept, however user error and theft keep popping into my head. I almost prefer the idea of an RFID-like technology that detects the products in the basket and so will adjust itself when items are taken out and exchanged for something else.

I’ve been using Scan Bag Go at Stop and Shop without a hitch for years. It is a little clunky once you get to checkout and the syncing of your purchases to POS seems slow but I’ve never had it freeze up. I think using your app on a phone is a no-brainer for consumers but I’m not sure for grocers. I think shrink would be an issue. In self-checkout you have a controlled environment with the scanning. With app-based pay and go I’m not sure what is preventing fraud.

Consumers gravitate to what is easiest and fastest. Chinks in the system annoy and embarrass customers. And it has to be foolproof.

Technology should be lubricating sales. If it’s not, then it’s too early to introduce to your customers. Customers, when it comes to managing their experience and purchases, aren’t guinea pigs.

Mobile scan and go remains the holy grail of in person shopping. It’s the perfect data and marketing opportunity married with a real convenience — not waiting in line. This is the first time consumer phones have had good enough cameras and fast enough processors for easy scanning and it’s the beginning of a major retail disruption as it adapts to the age of the smartphone.

(First a disclaimer: my company, FutureProof Retail is obsessed with mobile scan and go.) At this point the only thing holding back mobile scan and go is how fast retailers get savvy to it. The technology — mainly scanning — has been improved by nature of the phones’ cameras and processors getting better. The early trials of scan and go type systems have also laid the groundwork for comprehensive loss prevention and customer service solutions which, despite requiring attention to detail and great process work, are not unattainable. European grocers have been seeing scan and go growth for a long time now and have relatively mature options. Sainsbury’s has announced a pilot, Walmart is coming back for round 2 and Lidl is planning to try as well. The benefits are simply too great to pass by — it reduces the cost of sales, gives consumers what they want (too few open checkouts is the #1 supermarket complaint) and creates the ultimate marketing channel. Grocery, where the utility is greatest, is also one of the slowest… Read more »
1
|
0
-   Share

I think this is a matter of technology being forced on consumers under the guise of “this is good for you.” The article suggest it’s not really good for all and it’s not going to be good for many until the technology is honed.

While the adoption of self-scan among consumers has been very slow, I think it will eventually become a common practice for some retail formats (grocery and hard goods). However, just like self-checkout, there are some people that will not embrace the change in checkout process. Today, there are several hurdles to overcome to gain user acceptance: limited availability, user education, technical execution and device compatibility. The old adage, people process and technology make for successful technology integration. First of all, there are very few retailers that offer scan and go options, which makes it difficult for consumers to change their mindset for a new process. For those retailers that have scan and go capabilities, it is a challenge to get consumers to understand and try the new checkout option. Stop & Shop, which has offered this service for eight years, has only 15% of its customers using this service. This makes it difficult for other retailers to cost justify the investment in offering this service, especially if they opt to offer custom mobile devices in… Read more »
1
|
0
-   Share

While I’m sure this will appeal to some shoppers — it would be nice to see a (even a crude) survey to know how many, wouldn’t it? Finance people like me are going to worry about the practicalities: how many people are going to fail to scan things — either accidentally or deliberately, how many are going to do just the opposite (return things they already scanned) and then complain loudly on social media they were overcharged, what happens when items don’t scan, etc.?

The reality is, only a small percentage of people seem to use the self-check, the one time saving technology open to them now … this is an even bigger step.

The only thing holding this technology back is retailers. It’s a natural extension for consumers to scan via mobile while shopping, and I think the benefits of increased satisfaction, loyalty, engagement, etc. far outweigh the potential downsides. With pilots, rollouts and continued development the process and technology will of course improve over time — just as we saw with self-checkout years ago.

It’s a 10 out of 10. The market moves towards economies and this is a no-brainer. Retailers are the LAST to invest in anything they perceive as going against the bottom line.

Soon it will be a table stake and few will get the first-mover advantage. Shrinkage and compatibility are temporary issues. Oh, and forget proprietary scanners. It’s got to work on smartphones.

This may appeal to certain types of shoppers, but getting the execution will be tricky. A few potential problems that immediately spring to mind are tech failure, user error, and theft. I’m also wondering if this is actually any more efficient than self-checkout for the customer. I do see the app as a great data collection and marketing opportunity for the retailer though, as William Hogben mentioned.

Working flawlessly at Sam’s Club near our headquarters. It has converted many of our employees into Sam’s Club loyalists. Line-skipping is a very powerful and addicting shopping experience. The trick is for retailers (including Sam’s) to repurpose the vanishing cashiers to the sales floor.

Braintrust
"This solution needs to work nearly flawlessly to be viable and, the article shows, the technology and processes are nowhere near ready yet."

"I love the concept, however user error and theft keep popping into my head."

"I think using your app on a phone is a no-brainer for consumers, but I’m not sure for grocers."