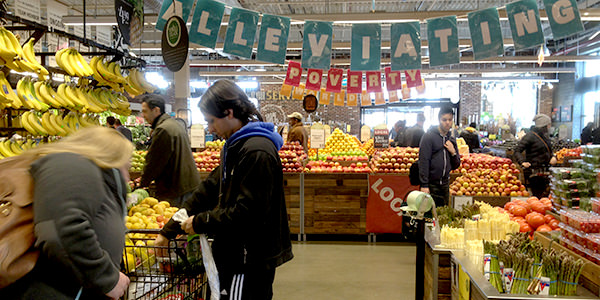 The issue of food waste has garnered a lot of attention recently. Both governments and private grocers have jumped in to try to limit the amount of perfectly edible perishables being thrown out. France has gone as far as to enact anti-food waste laws, and a recently opened grocery store in Denmark specializes in food that may be bruised, battered or expired, but tastes just fine. The trend has remained a niche stateside, but now one of the biggest names in natural foods is testing out this very green policy. Whole Foods is piloting the sale of “ugly” produce.

The grocer has entered into a partnership with California-based startup Imperfect Produce, a delivery service for produce that doesn’t fit the cosmetic standards of contemporary grocery stores. According to NPR, Whole Foods will test the sale of misshapen produce in a handful of stores in Northern California. There may have been some customer impetus behind the move as well. Last September, a Change.org petition appeared by a group called The Ugly Fruit and Veg Campaign, which encouraged Whole Foods (and Walmart) to stop contributing to the food waste problem.

This may be a great time, PR-wise, for Whole Foods to publicly eschew wastefulness and jump onto the ugly produce bandwagon. No stranger to suffering viral takedowns (think last year’s overpriced asparagus water debacle), the chain has been the target of a “Twitterstorm” for its sale of $6 pre-peeled, individually packed oranges. CBS News reported that Whole Foods quickly yanked the oranges from its shelves, tweeting, “These have been pulled. We hear you, and we will leave them in their natural packaging: the peel.”

In addition to supporting its green image, stocking ugly fruits and vegetables could also help the grocer face down its high price-perception problem since funny looking produce is often discounted.

DISCUSSION QUESTIONS: How well does the sale of ugly produce play to Whole Foods’ customer base? Do you think shoppers will be willing, even at a lower price, to buy “ugly” produce instead of the chain’s normal fare? Will Whole Foods help set a trend in motion that will spread to conventional grocery stores in the U.S.?

Please practice The RetailWire Golden Rule when submitting your comments.
Braintrust
"I’m not sure if the "ugly" marketing makes sense. I’ve had friends who have moved to the U.S. and comment on our fruit. Oranges the size of grapefruits, grapefruits the size of watermelons and none of it has any taste. Maybe ugly is better."

Beauty is in the eye of the beholder. It also might be enhanced for some Whole Foods shoppers by having a lower price point following the strategy utilized by Giant Eagle with its Produce with Personality.

Parents with kids might find that they see the ugly produce as something different and fun to eat. Who knows, they might even eat more fruits and vegetables.

Long overdue. It’s about time food retailers — and the public — took the morality of food waste seriously. But the marketing of this has to be wise. Even in this article the descriptors “ugly” and “funny looking” are used pejoratively and putting the words in quotes doesn’t quite mitigate that.

So EITHER we drop the use of those derogatory labels and call the fruit and vegetables what they are, i.e., carrots, oranges, etc., OR we cleverly use those words in a fun and appealing (if not sympathetic) way. Heck, if marketers can make family-focused commercials on how toilet paper works without leaving little bits behind on your behind, someone knows how to make naturally-shaped fruit and vegetables not only acceptable but desirable. And for goodness sakes, let’s not automatically put them in a discount bin or relegate them to food banks. Nature has given this sustenance to us, let’s be grateful.

All said, changing the human mind is the most difficult challenge in the universe.

This is probably just another feel good story. You shop at Whole Foods because you want to be more perfect and therefore want to buy products more perfect than found at other stores. There was a company at the NGA show that sold a product that turned ugly produce into some kind of byproduct that could be used as fertilizer. Problem solved. From experience I have seen food pantries for the poor having difficulty in giving away ugly produce, why would a grocer want to devote valuable space for products that people don’t want when it’s free? For now in the U.S., I think ugly produce will end up in same place as dented canned good with no labels.

I think the Whole Foods foray into this area, if it has even a modicum of success, will encourage growth by conventional grocers.

The U.S. still lags behind Western Europe on the issue of sustainability. A very interesting article on this endeavor can be found in the McKinsey Quarterly, February 2016: Toward a Circular Economy in Food.

In the age of urban food deserts it is embarrassing that it has taken this long to have this idea be introduced.

Boy oh boy, after convincing elite shoppers that it is well worth paying extra for big beautiful perfect fruits and vegetables (isn’t that why people started going to Whole Foods in the first place?) Whole Foods is now saying, “but ugly imperfect food is also good.” I think this is a great and worthy initiative for some grocers and markets to foster in order to help cut food waste. But it seems highly strange, disconnected from their brand image and almost schizophrenic for Whole Foods to do it.

I think this is awesome. I remember reading about Imperfect Produce and thought at the time that there needs to be a major player to lead the way. I’m really happy to see Whole Foods take the lead and hope it is something they consider doing nationally.

I think consumers will embrace it. Especially if there is a price adjustment for doing so.

It will have to be priced significantly lower to make an impact on the aggressive pricing at Whole Foods. I think the concept is a good one but I’m not sure if the “ugly” marketing makes sense.

I’ve had friends who have moved to the U.S. and comment on our fruit. Oranges the size of grapefruits, grapefruits the size of watermelons and none of it has any taste. Maybe ugly is better.

Three simple words. I love it.

I would love to buy ugly fruit.

If Whole Foods had an arm called, “OK Foods” this would be a great idea. However, quality of produce includes characteristics including size, color, shape, firmness and their affluent customer base shops at Whole Foods for high quality produce. So what customer are they targeting with the discounted ugly fruit? Besides the PR, this won’t do much to please their core customer.

I buy produce from a couple of local chains in which many of my fellow shoppers speak little English. The product is ugly. Its also priced well below WF. Most of the employees are Hispanic.

WF tends to have beautiful product and big prices. I think its customers expect that archetypal apple, squash, kale or cilantro is part of the value. I think the big brand ensures a sanitized shopping experience with curated, manicured goods for those who want to pay for it.

I’m not sure about this idea. I get the PR value, like REI closing stores on Black Friday. But it was open online. So there will be ugly food — but who will buy it?

And so we like to say, “retail ain’t for sissies!”

I think we have a (big time) semantics problem here: my definition of “ugly” is those … whatever they are — gourds, I guess — with bumps all over them. Or a mushroom, which to me looks like something from under the ground that I wouldn’t want to eat. In short, the Island of Misfit Vegetables.

But I suspect what is being talked about here is stuff that is actually “bruised, battered or expired,” which is quite different. How a store would decide which among the injured is actually salable, I’m unclear on. At any rate, I don’t see this as a very promising field for anybody … except maybe the already mentioned PR dept.

I think shoppers will pick up an ugly fruit or two just to appease their own consciences when they buy all that other high priced stuff. High-end shoppers, if you want to call them that, like to feel like they are contributing to the betterment and doing the right thing. This, to me, falls into the same category. At Whole Foods, that is….

If anyone can make buying ugly produce a “thing,” it’s Whole Foods and its core consumer.

I do believe farmers markets will be able to join the ugly produce space. However, I don’t believe it will spread to conventional grocers, due to the logistics involved and the additional space that will be needed at the store levels. Currently, conventional grocers are carrying the “standard” and organic produce, there is limited space to introduce ugly produce.

Hopefully, this is merely the start of the “ugly” produce movement in this country and the concept really takes off for Whole Foods. If so, other grocers will take notice and get on board. Food waste is a serious problem in this country, and selling discounted produce that doesn’t meet some consumers’ superficial expectations is a great start at curbing it.
If the concept doesn’t take off, Whole Foods can pivot and donate this produce to food banks and shelters. Either way, it could be a great PR move for the grocer that has taken it’s fair share of abuse in the press.

Braintrust
"I’m not sure if the "ugly" marketing makes sense. I’ve had friends who have moved to the U.S. and comment on our fruit. Oranges the size of grapefruits, grapefruits the size of watermelons and none of it has any taste. Maybe ugly is better."