Why are mobile conversion rates so low? 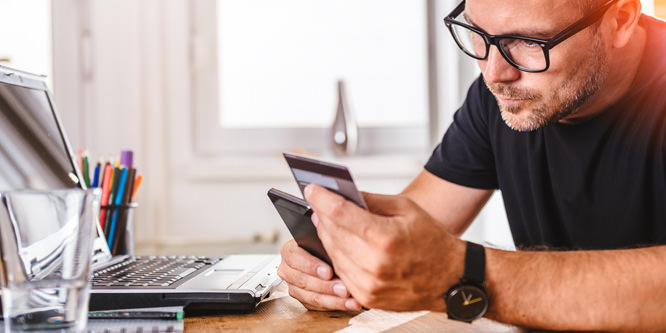 The average retailer stands to lose on 11 percent of potential revenue over the next 14 months because shoppers are shifting away from PCs, yet smartphone conversion remains woefully low, according to Adobe.

At the same time, while smartphones saw a 65 percent increase in revenue growth, overall online sales revenue increased only ten percent as desktop and tablet both declined two percent. Smartphone conversions were one percent versus two percent for tablet and 2.8 percent for desktop.

The main reason shoppers make a purchase on desktops over smartphones is because of easier navigation of pages (cited by 30 percent) and seeing images better on a bigger screen (26 percent), according to an accompanying survey to Adobe’s report. 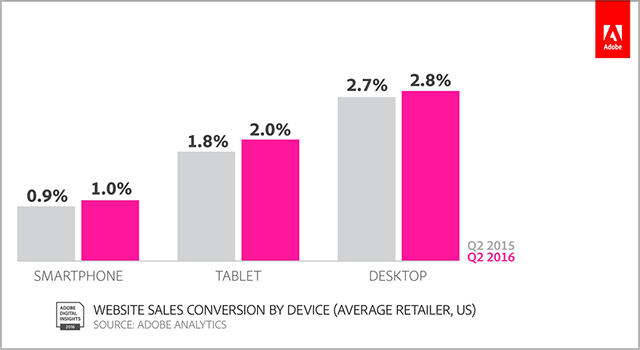 A survey from Mapp Digital exploring what prevents people from making mobile purchases overall (whether smartphone or tablet) likewise found navigation to be a problem with smartphones. Over a third of respondents (36.7 percent) indicated that difficulties navigating prevented them from making a purchase on a mobile phone versus 25.7 percent citing a similar challenge on tablet.

Other conversion challenges for smartphones from the Mapp survey included:

DISCUSSION QUESTIONS: Do you see online sales falling back in the next few years due to the migration of traffic from desktop to mobile devices? What advice do you have for retailers looking to improve purchase conversion on smartphones?

Please practice The RetailWire Golden Rule when submitting your comments.
Braintrust
"Too many retailers have simply crammed desktop designs into the smaller form-factor of mobile screens."

"My advice to retailers: There are far more important things to worry about than getting your mobile conversion rates up."

"A key problem is that people engage in a lot of causal activity on their smartphones but prefer to convert in-store or by using their computers."

16 Comments on "Why are mobile conversion rates so low?"

Are we still talking about online sales versus offline sales as distinct entities? What happened to all the “omnichannel” talk? Who cares where a purchase is actually consummated — all that matters is that the purchase takes place. All of these channels/devices contribute to the purchase, so let’s stop worrying about these meaningless device-specific conversion metrics.

While omnichannel is the approach the focus on attribution is of significant value. As many factors can cause swings in consumer behavior and influences, awareness of what moves the needles is essential to marketing communications investment. Where there are big marketing machines revving to gain brand and retailer spending, real data that informs best practice is a big part of the solution to lethargy.

The relationship between brands and agencies is increasingly uneasy in terms of ROI and transparency. An audit undertaken by the powerful end user group Association of National Advertisers (ANA) which was released early this year received commentary during last week’s Video Everywhere conference hosted by the Digital Place-based Advertising Association. Irwin Gotlieb, global chairman of agency giant GroupM minimized advertiser concerns with agency conduct in declaring that audit providers were simply undertaking aggressive business development efforts. It is time that analytics pull the wool away from the eyes. Read the story here.

This insight is invaluable Peter. As user preferences change, budgets need to shift as well.

Too many retailers have simply crammed desktop designs into the smaller form-factor of mobile screens.

While mobile broadband and Wi-Fi access are improving every day, screen-load time is really key and too many retailers’ apps and sites load too slowly.

The only path forward is to design lightweight but info-dense screens that give shoppers the information they need at a glance, in less than a second or two.

If retailers want to generate sales from smartphones, they need to adapt to the technology by making their sites (either through apps or the web) easier to see, search and use. They also need to recognize that consumers are probably not going to download their apps and find other ways to reach consumers. Keep it simple!

The whole is greater than the sum of the parts. The ubiquitous smartphone is becoming the portal of choice by consumers worldwide. It enables access to information and shopping anytime and everywhere. Yet conversion rates in terms of final purchase via the mobile smartphone have been lagging woefully behind other larger screens. Tom Ryan does a good job of highlighting many of the reasons why sales on mobile devices are difficult. But there is a much larger view in terms of the role of mobile in the consumer journey. Current data suggests that consumers begin their journey online 85 percent of the time. Research now indicates that mobile use is becoming more frequent than computers. There are research studies indicating that smartphones are used as part of the consumer shopping process as much as 65 percent of the time. So while the consumer does not necessarily make the final purchase on their phone, mobile search plays a huge role in the research, price checking and selecting final preferences. A mobile search in the store aisle… Read more »
2
|
0
-   Share

If more purchases are taking place on smartphones, online product photos should be easily convertible to a smaller screen. Photos of the product from every angle (frontside, backside, left, right) should also be available. Customers need access to enough detail and information to make them comfortable with their purchase via mobile device.

Conversion rates should naturally be lower on mobile devices for two reasons: Some mobile shopping behavior takes place in stores, where people are researching items that they might purchase in-store. When consumers are using mobile devices at home, it is often in a mode where they’re passively browsing while watching TV. It’s a sit-back exercise, not a lean-forward desktop shopping exercise. My advice to retailers: There are far more important things to worry about than getting your mobile conversion rates up.

Mobile, tablet and desktop use are each simply website access. Let’s not forget this in realizing that there is no great mystery to online engagement. Let’s also be aware that consumers capabilities are growing. So sessions will be fewer and shorter as they get to their decision point.

A topic I am knee-deep in! Some of you might know I am the consultant working with the mobile marketing association, charged with conducting the most expansive review ever conducted of multi-touch attribution methods (MTA). A key problem is that people engage in a lot of causal activity on their smartphones but prefer to convert in-store or by using their computers. That means that MTA methods must integrate screens via unified IDs, so that we can link together the exposure on the phone to the conversion via a computer — which is now happening. However, many are still using last-touch attribution because of its simplicity and also because you can more easily negotiate CPAs with publishers. Anyway, there is a measurement problem, but we are on the verge of fixing this as an industry.

I couldn’t get past the first sentence Tom. “The average retailer stands to lose on 11 percent of potential revenue over the next 14 months because shoppers are shifting away from PCs, yet smartphone conversion remains woefully low, according to Adobe.” I thought, “who’s an average lovable retailer?” and came up with Orchard Supply. I googled and found this: “OSH, which said it hopes to complete the bankruptcy process within 90 days, reported $657 million in revenue during its last fiscal year.” (I think that was 2012.) I looked at their web and mobile presence and it was average, not responsive, and not so great on the mobile device. A prefect candidate for your math problem. Let’s say 10% of revenues are at risk – forget potential – lets just stay the same! What’s left to spend after everyone gets their cut from $65 million? What can they buy with that money including implementation and staff or services in the next 14 months? So I don’t think this survey speaks to everyone. It speaks to… Read more »
0
|
0
-   Share

There are still way too many retail sites that are nowhere near optimized for mobile. Plain and simple. Shoppers will not waste time on sites that are not easy to navigate. To me, there is no mystery here. If your strategy is to be cross-channel, then you have to take your mobile presence seriously.

The more important question is, what are the solutions to drive conversion rates via mobile? The next two years will be very exciting in terms of change and retail technology that genuinely improves customer experience. 5G will be another milestone that unlocks more clever tech.

Isn’t one part of the picture here that users are expecting to use mobiles in different ways — which may not end up with a purchase on a device? For example, I picked up a Russian film in Tesco last week — one I’d never heard of, but looked interesting, and so I used my mobile to research the film on both the Tesco website, and then across the wider web. I didn’t convert on the mobile, but I did in store. I also use my mobile to help me find stores I’ve not visited before in London, to compare prices and so on, or to check stock, all of which can — and do — distort conversion numbers for the channel, but are key to me converting in the wider picture. It’s part of the challenge of the convenience of the device. It’s in my pocket, and so I can use it to validate my decision, rather than having as clear as an intent as I would do in firing up my laptop, and… Read more »
0
|
0
-   Share

I wrote a guide examining this subject, but here’s the thing — the reason a lot of purchases aren’t going through on mobile is because it’s used for initial research, not always the final purchase. However, as more and more ecommerce sites adopt a mobile-first site design with — and this is key — an EASY to navigate checkout process, then I think it could easily overtake desktop in the future. The other thing that could push more people to buy directly on their mobile device is a well-designed app (just look at Amazon’s).

Braintrust
"Too many retailers have simply crammed desktop designs into the smaller form-factor of mobile screens."

"My advice to retailers: There are far more important things to worry about than getting your mobile conversion rates up."

"A key problem is that people engage in a lot of causal activity on their smartphones but prefer to convert in-store or by using their computers."