Why are there so few women in c-level positions? 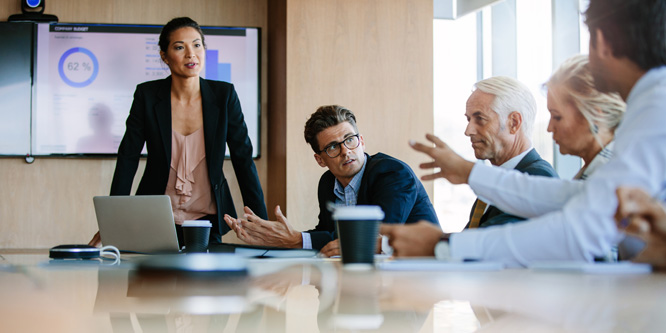 From entry level through middle management, women are hired and promoted at rates similar to their male counterparts, according to a report from the Network of Executive Women (NEW). But female first-level and mid-level managers leave their jobs at nearly double the rate of men in those positions. Women exit their higher-level manager, executive and c-suite roles four times as often as men.

Under-representation of women at the c-level continues despite multiple studies showing that companies with the most gender diversity consistently outperform their less-diverse counterparts.

The top reason for the high manager turnover, according to the report, is a sense of isolation.

“When the other 15 people in the room are men and they don’t see anyone like themselves, women feel like they don’t belong,” said NEW president and CEO Sarah Alter.

“Sexism is alive and well and so much more insidious than any of us realize,” said Serafina Palandech, president and co-founder of Hip Chick Farms. “But more common than obvious sexual harassment is being dismissed, ignored or not taken seriously because I’m a woman.”

Women say they’ve had to work harder to prove themselves and find other ways to build rapport with largely male counterparts.

Marcelle Smalley, national sales director for Kemps, for example, doesn’t play golf, and she certainly never took a customer to a strip club. (Yeah, it still happens.) “But I happen to have a passion for sports so that’s often a way to connect,” she said.

A key to keeping good women on the job is to pair them with someone, preferably another woman, who can help guide their careers.

work-life balance. Women also need to be honest with themselves about what is and isn’t possible, such as realizing they need a job with less travel to meet family obligations. Ms. Alter refers to times like those as “chokepoints” and says the industry needs to find better ways to retain women when an imbalance between work and family has them heading for the exits.

DISCUSSION QUESTIONS: What’s driving the significantly higher turnover rates among female versus male managers? What more can retailers and vendors do to increase the proportion of women in leadership roles? What are the biggest barriers to overcome?

Please practice The RetailWire Golden Rule when submitting your comments.
Braintrust
"Corporations need to stop the lip service and make the necessary changes."

"It’s time for the retail industry to catch up with others that have blazed the trail for women for decades."

"Work balance is an excuse for lack of diversity. It really depends on a senior C-level commitment and sponsorship for diversity at the top..."

12 Comments on "Why are there so few women in c-level positions?"

It’s time for the retail industry to catch up with others that have blazed the trail for women for decades. Technology is actually a good industry to look to for female leadership. I’d say my company almost leans toward advancing women to the highest roles, which I believe is a great thing!

Pretty much every woman will know the answer to “Why are there so few women in senior-level positions?” It’s unfortunate for business that we’re still having this discussion in 2018. We can hope that the Millennial generation, which carries itself with a whiff of entitlement, can smash through the old barriers and move more women into positions of authority.

In the claw and climb battles to the most influential and rewarding positions, being nimble in the bringing the right skills and team members is valued by investors. So talent seeks their “Ikigai” where their passions, talents, wish to contribute and ability to be paid come together. The fingers must in large part point to those investors who constantly demand more and better and who lack the patience to have plans play out. I see the system as very dynamic, but not broken.

Wow is this hard to weigh in on with any level of brevity. And it’s not black and white — some companies are enlightened here and some (okay, many) are not. It’s crazy given the fact that so many household purchases are driven by women and science has proven how different our brains are from men.

I’m curious to hear from the men reading this inquiry — what are YOU seeing?

After 30+ years in the retail industry I am tired of this conversation. It’s not rocket science. There are plenty of qualified women out there who are fully capable of being promoted up the ranks to C-level. How about we stop talking about it and fix it already? Corporations need to stop the lip service and make the necessary changes.

I am also over the comment that women are perceived to need jobs with less travel to meet family obligations. Single mom struggles aside, marriages have evolved; men and women share equal responsibility for raising the kids. Women with children travel for work every day.

In many conservative companies men prefer to be among men. They see women as competition. This is old-fashioned. This is counts for a whole sector. Take CE in Europe for instance. 90 percent+ of the senior executives (director and C-level) are men. Companies need to walk the talk. And that doesn’t just mean having women employed in top positions for corporate communication and marketing.

There are so many barriers to women moving ahead in companies and into the C-suite. They have to do with attitudes of men towards women and women towards themselves. I remember more than thirty years ago when a male ad agency manager proudly showed me his staff of women managers. “What do you think of that?” he asked. My answer: “I think you’re getting away cheap.” Women are still paid less and accept it for the most part. Men expect to get paid more and demand it for the most part. And companies are complicit. I’m for retailers and vendors paving the way to have more women in leadership roles. But it requires support from women and men, employees overall, including executives and C-suite occupants. I’m optimistic in that I see more and more men taking on parent and other household responsibilities (in two parent households) that they would have shunned in the past. Women are still getting used to it, trying to appreciate the shared efforts without seeing it as a competition for superior… Read more »
1
|
0
-   Share

Laura and Cathy are right, it’s time to move past this conversation — companies should be taking action, not promoting “programs” designed to “solve” the issue. Particularly in an industry where purchase decisions are so often made primarily by women across so many consumer categories, you would think this inequality would be history by now. I do believe there is a strong generational mentality that still needs to be overcome, and perhaps as younger generations rise to more senior levels of management there will no longer be debates of bringing women vs. men into those senior positions. I see that younger generations tend to scratch their heads as to why older generations even debate these issues as they see everyone more equally to begin with.

Diversity at the C-suite level requires sponsorship from other C-suite level male leaders. That means women leaders need to be paired with male leaders that feel comfortable and see value in women providing a different point of view. Work balance is an excuse for lack of diversity. It really depends on a senior C-level commitment and sponsorship for diversity at the top and throughout the organization. If metrics are what is required to increase diversity, then the U.S. should follow the direction the E.U. has taken on measurement so that X percent have to be women.

I know many people are tired of this topic but while the problem prevails, the conversation must continue. Companies are missing out on top talent through unconscious bias and inflexible work conditions that don’t support working parents. It is my heartfelt hope that we continue to work towards a solution as an industry.

We had a female CEO at The Limited in the ’80s during some of our best years, and that practice has continued at L Brands since. There’s like 45 reasons retailers haven’t fully broken the glass ceiling ranging from choice to flat out prejudiced, but maybe more of them should consider it. Like Macy’s or The Gap, who both just picked some men to help them through some pretty rough waters. How’d that work for you in the past? You know, bringing in the younger and smarter version of the old model. Worked well I guess.

Perhaps it’s time to try something new. From my experience, a little different thinking can be a really good thing, all the way around.

The conversation must continue as the amount of women in top leadership roles is insignificant. About 5% of CEO’s of Fortune 500 are women and 20% of board jobs are women. In a recent NPR interview, the topic of women in leadership roles was discussed after the sad passing of icon Kate Spade. It is worth the 34 minutes.

The reasons more women do not make it to the top is because of (1) differences in leadership characteristics as compared to men, (2) networking for women means getting advice and support, whereas for men, it is a means to advance their career and (3) competing priorities outside of work. Women have greater demand from family then men (it has to be said).

Millennials and Gen Z who seem to view gender with unbiased eyes and heavily support agender. They will pave the way beyond gender to understanding the world through a highly diverse set of lenses. This will make both the most productive generations of our life time.

Braintrust
"Corporations need to stop the lip service and make the necessary changes."

"It’s time for the retail industry to catch up with others that have blazed the trail for women for decades."

"Work balance is an excuse for lack of diversity. It really depends on a senior C-level commitment and sponsorship for diversity at the top..."