Why did it take At Home so long to decide to sell online? 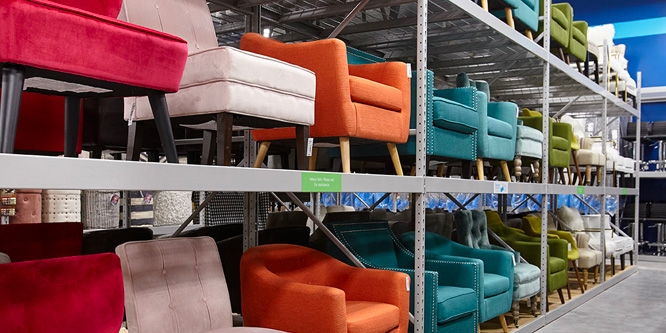 Furniture has been one of the fastest-growing product categories online in recent years. That doesn’t mean it’s profitable, however, which leaves it to retailers competing in the category to deal with the greater costs associated with selling online or skip it altogether. One of those holding out against joining Amazon, IKEA, Raymour & Flanigan, Wayfair and others in the e-tailing race has been At Home. That, however, is about to change.

In an interview with Bloomberg, chairman and CEO Lee Bird said that a precipitous drop in At Home’s stock price in June led him to reconsider pretty much everything about the company’s business.

Among the decisions made was that At Home needed to slow down the pace at which it was opening new stores. Another was that the chain needed to sell online.

Just two years ago, Mr. Bird was feeling good about At Home’s prospects. The chain was looking to basically increase its store count four-fold to around 600 locations and its website, which was heavily trafficked, was simply there to provide information. Customers looking to buy had to make a trip to an At Home store.

Fast forward to 2019 and At Home has been rumored as a takeover target. Reuters reported in May that Kohl’s was in preliminary discussions to acquire At Home. Not long after, At Home’s stock tanked, losing nearly half its value in one day. The company’s share price is down 54 percent for the year.

The chain plans to begin testing buy online, pickup in-store transactions in some markets. If all goes well, it will expand BOPIS to more locations.  At Home has set 2022 as the target date to begin offering delivery of online orders to customers’ homes and offices.

Brad Thomas, an analyst at KeyBanc Capital Markets, told Bloomberg that At Home has been hurt by a slowdown in the housing market and a failure to make consumers aware of its point of difference in the furniture category.

“The average American is not aware that At Home is a low-price leader,” Mr. Thomas said.

DISCUSSION QUESTIONS: Should At Home sell furniture online? What do you think, if anything, is wrong with At Home’s go-to-market strategy? How would you fix it?

Please practice The RetailWire Golden Rule when submitting your comments.
Braintrust
"At Home has a massive footprint and click and collect or local delivery is the way they can capitalize."

"At Home has proved that they are a successful business. Selling online is a significant next step. "

8 Comments on "Why did it take At Home so long to decide to sell online?"

At Home is still doing well despite its stock price. While BOPIS seems perfectly reasonable and perhaps even home delivery from the store could work, I’m not sure they really want to compete with Amazon and Wayfair. Rarely does a “me too” strategy work well. They are better off increasing marketing so people understand their existing value prop.

At Home has proved that they are a successful business. Selling online is a significant next step. Why they waited until now to get into the online game no one knows for sure, but most likely because they had other initiatives, one which was to open a significant number of stores which they have. Selling online sounds easy, but there are a lot of essential steps one must take for it to be successful.

Now that At Home has committed to building a web presence, I am confident they will do it well. There are still other major retailers who are not selling online. HomeGoods is one of them, yet look at the success of their business. Online is important, and eventually, all retailers will be there but only when they feel they are ready, and they can make it work.

There are several problems with At Home. First, levels of awareness are poor — especially in new markets; this leads to low footfall and low sales densities which is problematic for such large stores. Second, its warehouse format with massive stock levels is great for those doing large-scale home decoration projects, but it’s not so good for consumers looking for the odd item of home furnishings; this limits potential customer numbers. Third, prices are OK at At Home but they are nowhere near as competitive as IKEA — and in At Home’s rather uninspiring selling environment that equates to bad value for money.

For all that, the business model isn’t broken, but it does need a lot of tweaking. Selling online will help to stimulate awareness and enlarge audiences. However, the focus should be on picking up in stores; delivery will likely erode margins as At Home won’t be able to charge the full cost of fulfillment to the consumer while without being deeply uncompetitive.

I don’t think At Home should sell furniture online — for shipping. I do think At Home should sell furniture online for in-store pickup and local shipping. This is the IKEA model. It’s a profitable distribution model that capitalizes on At Home’s competitive advantage over Amazon, IKEA, Wayfair … At Home has a massive footprint and click and collect or local delivery is the way they can capitalize. To successfully compete against Amazon and Wayfair in the digital furniture category, they need to focus on their strength and change the game in their favor.

Selling online and offering BOPIS makes perfect sense for At Home. I wonder why this hasn’t been offered before.

At Home’s email marketing often uses item and price instead of showing the products grouped in life style settings. This backs up the in-store experience which is a lot like shopping in a warehouse. There are occasional room setting displays but most of the time you are surrounded by sky high fixtures that are packed with product. The perception is this is all low-end product, even when it’s not.

In addition to looking to sell online, I would fix that’s happening merchandising-wise on the sales floor. The brand new store near my house is cold and impersonal, not the ambiance I want shoppers to feel when decorating their homes.

Limiting online sales to the inventory available in the local store and for store pickup is limiting. While the shipping costs are a factor, other furniture stores have figured it out and it is time for At Home to join its competitors.

I understand why At Home would be reluctant to go with an online sales strategy a few years ago but the success of Wayfair should have been their litmus test and they seem to have been slow on the uptake. The furniture segment has been exploding from a technology perspective. My business has been furniture-heavy over the last several years as the leading technology vendors in this space are well past their prime with 30-year-old technology running 75 percent of the sector. This is also a sector that is fractured into over 1,000 independent retail brands and a few national players that is ripe for consolidation. It is not too late for At Home but they need to move fast and two and one half years before they sell online will simply be too late.

At Home is still confused about their position in the retail and the online marketplace. They need to fully define this and then stick to their placement. This also requires them to become a full online retailer, including their plans for a buy online, pickup in-store retailer. They already have enough “warehouse and retail” physical locations, and an active website. Making the leap to full online retailer should be the next step, and needs to be done in less than a year, not in three years. Survival and adaptation is their concern here, and slow growth will not work.

Braintrust
"At Home has a massive footprint and click and collect or local delivery is the way they can capitalize."

"At Home has proved that they are a successful business. Selling online is a significant next step. "