Why did Jet.com’s fresh delivery service go stale in NYC? 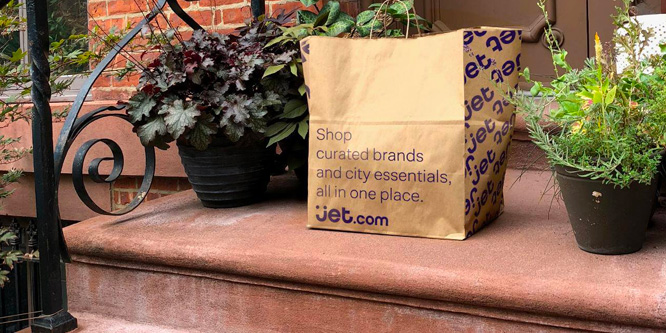 The service, intended to cater to busy urbanites, allowed for same- and next-day delivery of a range of grocery essentials, according to Supermarket News. Most distinctive was its business relationship with respected local vendors, providing customers products from artisanal retailers such as Bedford Cheese Shop, Orwashers Bakery and, maybe most ambitiously, fresh fish from Fulton Fish Market in Manhattan. The service also partnered with the meal kit company, Blue Apron.

Jet City Grocery experienced frequent out-of-stocks and operational difficulties from the outset and the company was also forced to raise prices. With the end of the service comes the closure of a 200,000-square-foot fulfillment warehouse, which opened last year, and the cutting of 200 to 300 jobs.

An account of the Fulton Fish Market relationship reported by Mobile Payments Today gives an idea of how easily supply chains for fresh food delivery might run into stumbling blocks. Fish was received at the Market in Manhattan between 10 p.m. and 2 a.m., then delivered to the Jet City Grocery fulfillment center in the Bronx by 8 a.m., where it was available for same-day delivery between 6 p.m. and 9 p.m. to those who ordered before noon.

Jet.com has experimented with other attempts to unseat food delivery incumbents since being acquired by Walmart. In 2016, shortly after Walmart’s acquisition of the e-tailer, it announced the rollout of a membership-free food delivery service in a few East Coast markets, which put it in competition with Amazon Fresh.

Amazon Fresh, for its part, has also had trouble getting fresh food delivery right.

In 2017, Amazon announced that it was cutting down the number of markets where it offered its Amazon  Fresh service, although it remains available in a few major urban markets, including New York City. The move came as a shock to many who speculated that the e-tail giant would be leveraging Whole Foods’ brick-and-mortar footprint to improve its fresh food delivery capabilities.

DISCUSSION QUESTIONS: What can retailers learn from the Jet City Grocery failure and how might they apply it to their own fresh delivery initiatives? What does this mean for the viability of Jet.com as a standalone e-tailer, and what do you think Walmart’s long-term plan is for the Jet.com website/brand?

Please practice The RetailWire Golden Rule when submitting your comments.
Braintrust
"Grocery is a very tough category to get right in delivery and I suspect that the Jet service was never profitable, even if it did provide some valuable lessons for Walmart."

7 Comments on "Why did Jet.com’s fresh delivery service go stale in NYC?"

NYC is a very difficult place to navigate and deliver on the promise of same-day or next-day fresh foods, especially fish. When you consider that the fish needed to be picked up in Manhattan then delivered to the Jet fulfillment center in the Bronx and then most likely delivered to customers back in Manhattan, it was a costly and time consuming endeavor no matter how you cut it. Construction, grid-locked intersections, street closures for parades and politicians, water main breaks, and street paving make it all the more difficult to deliver on the promise, and at some point you have to cut your losses. Perhaps this works well in suburban areas, although I bet the fish is not as good.

The service never really took off in NYC, partly because of issues with delivery, partly because of the cost, and partly because there is so much alternative choice. Grocery is a very tough category to get right in delivery and I suspect that the Jet service was never profitable, even if it did provide some valuable lessons for Walmart.

NYC has become the battleground for immediate satisfaction. Between all the grocery and restaurant delivery services, customers have an overabundance of choice. Eventually, consumers will settle on one or two of their favorite grocery delivery providers.

Jet was up against an increasingly complex delivery market in NYC, where the astronomical costs of dealing with the traffic, tolls, and regulations simply made it infeasible to continue operating at such a loss. Walmart, taking a similar approach that Amazon takes, will continue to learn and evolve, even when experiments don’t turn out as expected.

Borrowing and paraphrasing from the Frank Sinatra song “New York, New York” If you can make it there you can make it anywhere. Why does this still ring true? Because it is a tough city to make it, whatever it is, work. As others have pointed out the traffic issues alone make delivery of anything difficult. This is compounded by trying to deliver perishable items or something that requires the care that fish does.

Nothing new, and if they haven’t learned it already, they probably never will: grocery delivery is not, at present, a viable i.e. money making business, and an attempt at “fresh” that depends on lots of middlemen will be neither profitable nor truly fresh. Almost day old fish? I think an upper East-Sider needing cod would have been better served by sending Jeeves up in Uber to buy it directly.

As the Jet.com development underscores, digital grocery seems like one business, but it is really an amalgam of two “cultures”: shelf-stable and perishable, each with its own fulfillment challenges and methods. Most online shoppers test the water with shelf-stable groceries, and most retailers do pretty well at fulfilling the promise. Packaged products are consistent, machine-readable, robotics-friendly, they require little or no temperature control, and can be shipped via third parties. Digital sales of perishable products present a whole other proposition. They are non-standard, fragile and prone to spoilage. I’ve seen data recently that confirms that digital penetration of fresh products lags behind shelf-stable in the U.S., U.K., France, Spain, and Italy. The reasons come down to shopper mistrust about handing over the product selection process over to a remote stranger. Retailers generally admit they are not very good at this yet. Keeping products at the right temperature and shock-protected during staging and transport adds greatly to the cost. Walmart and Jet.com have re-learned an important food retailing lesson, this time about doing digital fresh grocery… Read more »
0
|
0
-   Share

Braintrust
"Grocery is a very tough category to get right in delivery and I suspect that the Jet service was never profitable, even if it did provide some valuable lessons for Walmart."