Will a new private label be a good fit for Macy’s customers? 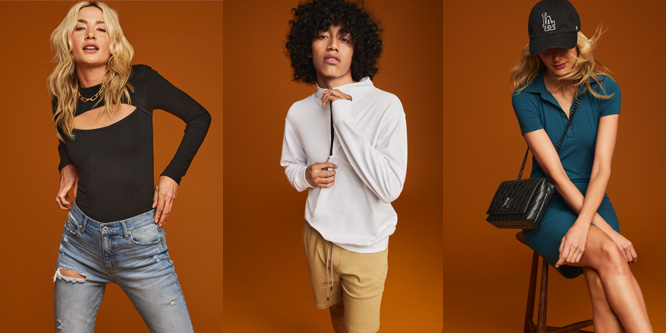 Macy’s has long been searching for a way to become fashionable and relevant again. In the past few years it has implemented in-store VR-based furniture design and promised omnichannel acceleration. The apparel chain’s latest attempt, though, is about the product.

Macy’s is launching a new private label brand called “And Now This,” according to a press release. The retailer is touting the clothing line as fashion-forward and contemporary and has planned related events in New York City, Chicago and Fort Lauderdale throughout late July.

This is not Macy’s only recent attempt to appeal to a new, more fashion conscious consumer. The retailer announced in May the launch of a Macy’s-exclusive plus-sized collection, designed in conjunction with TV host Nina Parker.

Macy’s recent fashion rollouts look to be an attempt to capitalize on the tailwinds of vaccination-related economic reopenings across the U.S.

The retailer reported a same-store sales gain in the first quarter of 2021 with CEO Jeff Gennette stating that the chain did not view the business improvement as merely a short-term pop. Mr. Gennette pointed to 4.6 million new customers acquired during that quarter, a 23 percent increase from 2019. Forty-seven percent of Macy’s customers bought online from the retailer for the first time during that period.

Numerous factors have led to Macy’s loss of relevance in recent years. Waning foot traffic in malls has been rough on the retailer.  Amazon.com’s encroachment in the apparel category with its own private label brands, often introduced quietly on its website, is also thought to have played a role.

Other once popular mall-based brands also continue to struggle to reinvent themselves to meet the demands of a new retail ecosystem. The once highly-fashionable Gap, for instance, has suffered significantly over the past decade or more. Like Macy’s, the chain became well known for deep discounts during this time period. Most recently, Gap has begun forming unexpected partnerships to get its products to a new consumer base. The retailer inked a deal to have its Gap Home line of home essentials appear both on walmart.com and, eventually, Walmart’s physical shelves.

DISCUSSION QUESTIONS: Do you think adding private label lines like And Now This can help Macy’s become fashionable with customers again? What does a retailer in a position like Macy’s have to do to make its new private label a success?

Please practice The RetailWire Golden Rule when submitting your comments.
Braintrust
"Private label is a great idea for a retailer, but what is great about this particular private label?"

"Macy’s problems are more structural than a private label brand can solve. In fact Macy’s already has a few exclusives such as Alfani, already."

"We have discussed Macy’s before: it’s lost in the sea of similar retailers that have stepped up their game."

17 Comments on "Will a new private label be a good fit for Macy’s customers?"

Adding private label fashion lines is a great way for Macy’s to elevate its image as a place for fashion. With private labels, not available elsewhere, retailers can differentiate their brand and develop a base of loyal customers that like the new brand. The key to a successful launch of the new private label brand is to increase awareness with advertising to inspire consumers to try the new brand.

Private label is a great idea for a retailer, but what is great about this particular
private label?

“And Now This” – I’d like to meet the agency that got paid for this name.

I have trouble with these concepts which start and end with the idea of “we need a little more margin” rather than starting with what consumers are actually looking for. Macy’s is not going to disrupt fast-fashion for instance.

Good private label apparel is beneficial in two ways: it enhances margin and it creates some exclusive differentiation. As such, it is something Macy’s should have seriously tackled years ago – but better late than never! From what I can see, the “And Now This” range looks on-point from the perspective of being a casual collection suited to the more relaxed way people are dressing. However its success will depend on execution and I have some concerns here. First, how it looks in-store is important and, sadly, Macy’s is not renowned for its merchandising skills. Second, how far down the chain does the range get rolled out, as it seems like some regional stores – which are in desperate need of a boost – may not get the product. Third, this has to be part of a much bigger effort of reinvention and must be seen as a small solution, not the solution to Macy’s ills.

Private brands make sense for Macy’s. The rub is that Amazon is churning them out in record numbers and other retailers are rushing back to private brands to drive differentiation and plump up margins. In other words, Macy’s may have to move mountains to direct attention to its latest launch. At this point, it is a no-harm-no-foul proposition.

Macy’s problems are more structural than a private label brand can solve. In fact Macy’s already has a few exclusives such as Alfani, already.

Stores are a critical strategic pillar, but their size is unwieldy. Omnichannel capabilities such as app checkouts have hit a snag with challenges from unionized associates. Macy’s performance has been good, but not a standout over the past 12 months or so. The road ahead is less clear.

These are exactly my thoughts. We have discussed Macy’s before: it’s lost in the sea of similar retailers that have stepped up their game. While I agree that a private label addition, if targeted and communicated to customers, can be beneficial to drive sales, there are bigger issues like relevance in the market that have to be figured out first before you can begin to think about adding private label lines.

Private label brands already comprise about 20 percent of Macy’s revenue, and there seems to be potential for this to go up to 25 percent. This new brand could help. The key to a successful private label is making it compelling to your shopper base. Target has been highly successful with this tactic. The challenge for Macy’s will be to get customers to notice the new “And Now This” brand which will require innovative marketing to also reach new and lapsed customers.

“And Now This” needs to be much more interesting, sustainable and higher quality than Macy’s current private label offerings to capture consumers attention.

Macy’s has private label programs in place already and they are nothing to write home about. The challenge with many retailers who venture into private label is that they can’t get the assortment right.

The purpose of infusing a private label program into a brand and product mix is to fill in assortment gaps and increase gross margin/profitability. If the assortment is not what customers are looking for then it will never succeed.

I am not convinced that another Macy’s private brand is going to make them relevant again but if they are listening to what their customers want, then they may have a chance.

It’s a given that private label makes sense as part of a merchandising strategy. But it’s all in the execution. Product, presentation, and now especially social media marketing. What is the overriding strategy that will take Macy’s proprietary brands to top-of-mind awareness rather than one-day sales and Backstage? If this is just another brand they throw out there with high/low pricing then sure, it’s a fit — but it’s not a solution.

I’ve long said that Macy’s has too many private brands already, so why another? How does “And Now This” fill a different niche than “INC”? Will the customer be able to tell the difference? And who came up with that name?

Sometimes private brands serve a real purpose in terms of driving sales and filling assortment voids — but sometimes they are pure margin plays. Macy’s needs to eliminate something in order to make “And Now This” really stand out.

The last thing Macy’s needs is another private label. Macy’s suffers from a perpetual identity crises and what it needs is not yet one more “identity” but “an” identity. What should they do? Clean up the stores. Address the structural and leadership issues. Develop a pricing/business model that both makes a profit and builds brand value. Macy’s needs to spend time figuring out where its customers went and what drove them there. Throwing strategies against the wall won’t work, except perhaps by accident.

I have to admit that I have historically loved Macy’s. However I am getting tired of retailers who think just one more label will cure a lot of ills. Not today! I would start with hiring a research company to visit every location where they have stores and interview current and past customers and non-customers, taking their time to be absolutely thorough about in-depth information, and then hire another company to do the same. I really don’t think one label will up their game and market position.

Macy’s is taking the necessary steps to reignite its brand equity and provide experiences and assortments that will resonate with the Millennials and Gen Z. Private labels are an outstanding strategic maneuver to drive traffic, increase revenues, improve margin, and diversify the assortments and drive interest in the brand.

The “And Now This” private label initiative will need to be amplified by a powerful, targeted, and relevant social media campaign and digital marketing to draw interest in this offering, as well as the Macy’s brand. Clearly, the focus has to be on driving an outstanding customer-first experience vs. simply a margin improvement play. The margin improvements will come once Macy’s drives outstanding experiences and provides the trending fashion offerings the customer is looking for.

“Again”? Perhaps Matt is holding his age really well and he’s actually 75, but I don’t think Macy’s has been “fashionable” in his lifetime … literally: that concept died with its independence when it was bought by Federated.

There’s nothing wrong with house-brands, of course. They can earn reputations for quality or value or any of a number of semi-tangible attributes, but for something as amorphous as “fashionable,” the house itself has to have that reputation. Quite bluntly, Macy’s doesn’t.

While this is a great step towards deigning a new fashion identity for Macy’s, what is the endgame? One private label alone will not make enough of a difference to spur a turnaround — and Macy’s is not lacking in private label apparel. The issue has been, and remains, what does Macy’s mean to its target customer? The collection of private lines Macy’s has at its disposal has not been memorable as compared to, say, Target’s private lines in recent years. Assuming there is a clear definition of who this new line should attract, what else does Macy’s have to offer that customer? This needs to be part of a broader strategy that includes in-store merchandising, online promotion, email campaigns, banner ads, and so on. Macy’s historically has many point-solutions that by themselves look and feel great and have much potential to lead to increased sales, but ultimately, the final execution is where things start to falter. If Macy’s can address that in a cohesive way that speaks to a single brand identity for their… Read more »
0
|
0
-   Share

Braintrust
"Private label is a great idea for a retailer, but what is great about this particular private label?"

"Macy’s problems are more structural than a private label brand can solve. In fact Macy’s already has a few exclusives such as Alfani, already."

"We have discussed Macy’s before: it’s lost in the sea of similar retailers that have stepped up their game."