Will adding Spanish give Amazon an edge over rival sites? 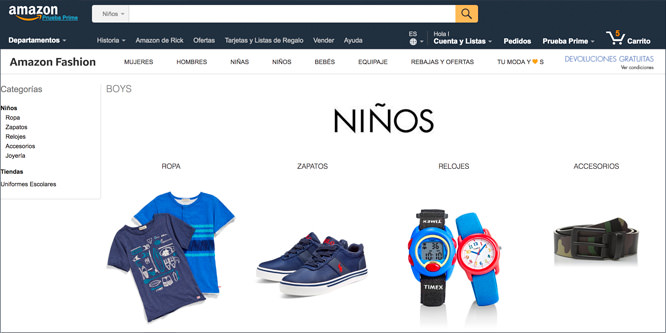 The United States has more Spanish speakers than Spain. In fact, it is the second largest Spanish speaking country in the world, trailing only Mexico. These facts have clearly not been lost on Amazon.com, which has begun adding Spanish to its site.

“Customers will be able to shop, browse and search for millions of products, view their shopping cart, and place orders in Spanish on Amazon.com and through the Amazon Mobile Shopping app,” a spokesperson said in a statement, reported by CNET.

“We will continue to roll out the shopping experience over the coming weeks. More and more customers should expect to see the option to shop Amazon.com in Spanish soon,” the spokesperson added.

Today, 41 million people living in the U.S. are native Spanish speakers, while another 11 million are bilingual Spanish/English, according to The Guardian. Roughly three-fourths of Latinos speak Spanish in their homes, according to Pew Research. The U.S. Census projects that there will be 138 million Spanish speakers living in America by 2050. If this comes to pass, the U.S. will be the largest Spanish-speaking nation on the planet.

The state with the highest concentration of Spanish speakers (including bilingual) is New Mexico (47 percent) followed by California and Texas at 38 percent. Thirty percent of people living in Arizona speak Spanish, while the same is true of 18 percent of New Yorkers.

The addition of Spanish to its U.S. site is not something new for Amazon. CNET reports that the e-tailer offers multiple language options on sites operating in Canada and Germany. In Germany, shoppers have the option of using German, Dutch, English, Polish and Turkish.

DISCUSSION QUESTIONS: What will adding Spanish do for Amazon’s U.S. site sales? Do you expect other retailers to add a Spanish language option on their sites now that Amazon has taken this step?

Please practice The RetailWire Golden Rule when submitting your comments.
Braintrust
"How can Amazon lose by catering to such significant numbers?"

"I would think multiple languages would fall in the “convenience” category..."

"...this represents a little love to a population under fire in DC. Expect others to be fast followers."

14 Comments on "Will adding Spanish give Amazon an edge over rival sites?"

Don’t the statistics speak for themselves? How can Amazon lose by catering to such significant numbers?

If multiple languages work in customer service, at order counters and in call centers, of course they will work on online sites.

There is no downside for Amazon. It will add 40+ million potential customers and likely a number of companies that focus on the Hispanic market.

Amazon is taking the lead in many ways — Prime membership and free shipping, coming offline with Amazon Go and now spreading into more client bases with multiple languages. Every move Amazon makes captures a lot of attention from others, too.

My prediction: Walmart will quickly follow with Spanish on their page. As soon as that happens, many other websites will follow in expanding their customer outreach.

Why would this do anything but increase sales for Amazon and add another nightmare for other retailer? Other retailers are trying to make their online sales work well so they can compete with Amazon and now they will have to offer Spanish.

A few years from now we’ll be marveling that we even had this discussion.

Spanish is one of the fastest growing languages in the U.S. In 2013 a Pew study revealed the number of speakers is up 233 percent since 1980. We sometimes forget that it’s the second-most widely spoken language in the world (after Mandarin Chinese) with 400 million native speakers and official status in a staggering 21 countries, spanning South, Central and North America as well as Africa and Europe.

I’m a bit surprised they are only doing this now, as it’s greatly in the favor of their end-game. Access and value are always prime considerations, just like with AI, as Amazon Echo via Alexa has over 10,000 “skills” and that’s growing exponentially.

With Walmart investing more in Brazil and Amazon starting to grow significantly in India, reach and ease of access is always important when you are building the biggest value ecosystem in the world like Amazon Prime is doing. Nothing spells convenience like being able to access services in your native tongue.

I’m really surprised they didn’t do this years ago. They can’t help but sell more.

It is really a no-brainer that to better cater to the needs of your customers is a good step — I wonder why Amazon and other e-tailers have not done this until now. There is not much of a trade-off here because the cost of this move is insignificant and the benefits are potentially large, so it is an easy decision. I assume other e-tailers will follow.

It should be a non-issue. Once again, Amazon is exercising its first-mover advantage. Plus, this represents a little love to a population under fire in DC. Expect others to be fast followers.

To be honest, I’m surprised to find out they weren’t doing this already. They have to have significant translation capabilities given the number of countries they’re in anyway. I can see that it might be challenging to manage with marketplace sellers, but in the end, their value proposition is convenience and breadth of assortment. I would think multiple languages would fall in the “convenience” category, especially when those languages cover a significant portion of the population. The easier it is for consumers to understand what they’re buying, the easier it is to buy.

I know what all of the other retailers are thinking … “Why didn’t I think of that?”

Once again, Amazon is stepping up as a major retailing disrupter — this time with a concept that has nothing to do with technology or a modern/new way of doing business. They are just thinking about their customers. And in this case it’s the customers who speak Spanish!

There is a lot of information to consider in this discussion for sure. I would be more interested in numbers that support the true business opportunity potential difference. If we are compelled to break down market segments by race first then perhaps a necessary follow on to support momentum for change should be the potential for a positive return on investment. Living here in the Northeast US of A there is a noticeable reversal in Hispanic population. And as I recall this demographic was, and often is, identified as a workforce dominated by a below minimum wage labor source. Part of using demographic identifiers is the purpose of finding fully qualified commercial prospects that we can contact and do business with. It is a good idea to bring the companies’ message to as many as we can do business with. It is poor business practice not to prioritize based on profit potential. A look at all opportunities parallel to this might see better returns from language access abilities in Russian, Chinese, Korean, Turkish and Egyptian… Read more »
0
|
0
-   Share

Braintrust
"How can Amazon lose by catering to such significant numbers?"

"I would think multiple languages would fall in the “convenience” category..."

"...this represents a little love to a population under fire in DC. Expect others to be fast followers."