Will Amazon pull a Quidsi on Zappos? 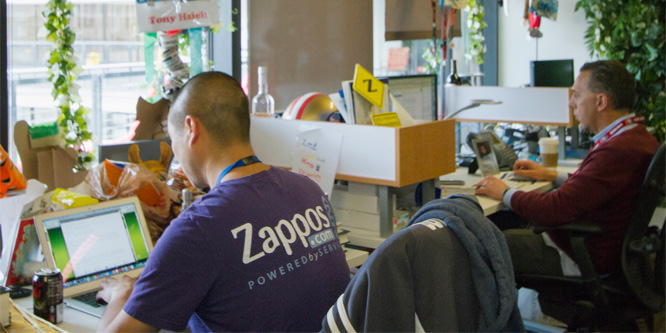 Amazon.com will officially close Diapers.com and the other sites operated by Quidsi tomorrow after the company, which it acquired in 2011, failed to turn a profit. While the decision surprised some, it certainly didn’t qualify as a shocker. But what if Amazon announced it planned to do the same with Zappos.com?

Shelly Banjo, a Bloomberg columnist, wrote that the combination of Quidsi’s closing and the recent letter from Amazon CEO Jeff Bezos offering his views on accepting failure led her to question what part of the e-tailing giant’s business was most likely to be jettisoned in the future. Her conclusion — Zappos.

The heart of Ms. Banjo’s argument is that when Amazon acquired Zappos, the company was, similarly to Quidsi, a “formidable contender” that offered Amazon new talent and knowledge that it did not possess on its own. Now that Amazon has built its own shoe business — it’s the number one seller of footwear online, according to Slice Intelligence — and taken what it needed from Zappos, it could just fold the business.

Looking more closely at Slice’s data shows that Amazon and Zappos are the top two sellers of footwear online. In 2014, Zappos held a 19.8 percent share of the market, slightly ahead of Amazon at 19.0 percent. Since then, Zappos has seen its share slip to 15.1 percent while Amazon has risen to 26.3 percent (for the three months ending 3/31/17). It appears that at least some of Amazon’s gains have been at Zappos’ expense. So, it is plausible that Amazon may choose to “Quidsi” Zappos.

On the other hand, Zappos has something Quidsi did not — brand equity built on a culture of customer service that has resulted in legions of fans. True, Zappos’ eroding share numbers indicate it has lost some of its edge. Management has responded with a new loyalty program and increased promotional activity, including its “Friends with Benefits Road Show.” Will these efforts be enough in the end to help Zappos regain lost market share? Will Amazon eventually put Zappos on its list of not so fast failures?

DISCUSSION QUESTIONS: Does the decision to close Quidsi suggest to you that Amazon is taking a new approach to how it measures business success? Do you think it is likely that Amazon.com will close Zappos.com?

Please practice The RetailWire Golden Rule when submitting your comments.
Braintrust
"I don't see a net positive by folding the Zappos business into Amazon, considering the brand loyalty it built (and continues to enjoy)."

12 Comments on "Will Amazon pull a Quidsi on Zappos?"

Zappos, unlike Quidsi, has great brand equity, and Quidsi never really integrated with Amazon’s systems and culture. That said, now that it is the dominant shoe retailer online with it’s own positive reputation for customer service, Bezos and company may decide not to support two brands in the marketplace.

Zappos has customer and brand loyalty beyond anything Quidsi had achieved. That is why Amazon paid so much more for Quidsi and was the bone of contention between Bezos and Marc Lore. The decision to shut down Quidsi was directed at Marc Lore. Therefore, I do not believe Zappos is in any danger.

Regarding the market share data: Zappos sells more than just footwear. They have expanded into fashion and accessories. Slice Intelligence is not like Nielsen data. It is not scan data. It is an estimate from its shopper panel. Getting true market share data from online sales is almost impossible. So take those numbers with a grain of salt Additionally, the online marketplace for fashion is expanding at a rapid pace. As more players enter the market, the pie gets cut up into more pieces.

I think Zappos is still a great retailer in the consumer’s eye and will continue as its own entity.

The share numbers over the past four years suggest that the business is basically static for Amazon. (The Amazon brand has gained while the Zappos brand has slipped.) I don’t see a net positive by folding the Zappos business into Amazon, considering the brand loyalty it built (and continues to enjoy). Amazon has an opportunity to re-grow the Zappos business and to use it as a laboratory for market segmentation strategies that could be applied to other areas of the company.

It seems surprising that a company which on the surface has never been focused on profitability closed a business unit because it was unprofitable. The more likely scenario is that Quidsi was always an acquihire. Given Amazon’s victory in the diapers battle, it’s hard to argue that they were even legitimately worried about the company as a competitor. The great talent has probably left and/or dispersed throughout the organization. Zappos, on the other hand, only agreed to be acquired if it could operate independently which creates a very different dynamic. Further, the data shows that its performance continues to be a substantial contributor.

In this scenario the customer base, including my family with our two young kids, never identified Quidsi as a separate brand and entity. We, along with our friends with young kids, were loyal to Diapers.com due to their customer service, assortments and overall positive experience. This remained the same even after the Amazon acquisition. With the Diapers.com and Quidsi brand integration into the overall Amazon brand, the customer certainly will maximize their Amazon Prime experience and take advantage of all the benefits of one integrated selling platform.

Zappos has an extremely loyal fan base, and it would appear to be to Amazon’s competitive advantage to keep this particular brand autonomous. However, the numbers speak for themselves, and it appears as though Amazon is cannibalizing Zappos’ overall market share, revenue and customer reach. If the Quidsi integration is any indication on where things are going, then the Amazon brand will truly strive to be everything to everyone.

Diapers.com never had the reputation that Zappos has and I can’t speak to the quality of their products but Zappos is still a brand name you hear thrown around for their great service and culture. Even if they are losing some share to Amazon, they are still a top footwear seller and they still have some fiercely loyal customers. I know a couple who would probably never buy from Amazon again if Zappos was shut down (you know the kind). So will Amazon close Zappos anytime soon? I’m thinking not. And that’s my 2 cents.

If it’s working why fix it? Zappos has been able to create and maintain a viable brand and presence. Amazon is so busy innovating elsewhere — why mess with Zappos? Any disruption with the Zappos brand and their followers may be counterproductive. Shoppers want to be a part of a community and not just another credit card number to absorb. I don’t foresee Amazon messing with Zappos in the near future.

There are a couple of things to wonder about here. One, what is Zappos’s marketing budget these days vs. pre-acquisition? I feel like I just don’t see them out in the wilds of the internet like I used to. Without that continuing investment in awareness, then they could easily lose share. And as awareness of what makes Zappos unique fades, the value of the stand-alone brand also fades. Two, has Amazon actually learned anything from Zappos? The whole brand promise was rabid customer service. And Amazon is still resolutely impossible to deal with. I mean, they had to be sued to pay back money from kids buying in-app purchases after Amazon offered little in the way of tools to help parents manage their accounts. They’re notorious for being difficult to get a hold of, whether you are a buyer, a seller, an author, whatever. So with apparently little to be learned, if the brand value of Zappos fades, then yeah, I can see how it no longer needs to stand alone. Three, is Zappos really… Read more »
1
|
0
-   Share

This is a great question. The drop in share of online shoes versus Amazon begs the comparison to Quidsi. I believe, though, that Zappos has such positive brand equity that its customers are much less price sensitive than on any other Amazon property. Amazon would be crazy to shut it down. Regarding a comment below, I do want to clarify that the Slice data sourced is just online shoe data, and excludes apparel and accessories. And we do indeed have a great way to track online sales now via panel, which many world class brands and retailers have become reliant upon.

I don’t think the decision to close Quidsi suggests at all that it is taking a new approach to how to measure success and I don’t think it by itself will lead to a shutting down of Zappos. Not every business (or political) decision is a slippery slope or trend. Some decisions are just based on the facts at hand and best judgement.

What will make Amazon consider doing something different with Zappos will be based on consumer trends and buying habits. Zappos will need to continue to evolve while also keeping up its most notable core value which is its customer centric focus and service.

This all seems rather silly. We’re speculating about something that some no-name columnist — sorry Ms. Banjo — speculated MIGHT make sense (what’s next, asking “what if Jeff Bezos decides lack of profits means Amazon should get out of retail”?).

Everyone agreed Quidsi was a rounding error, and had little hope of becoming anything else; that’s hardly true for Zappos — one could more easily call them the “anti-Quidsi.” So I don’t see any relevance.

Zappos may be losing market share slowly, but combined with Amazon, it’s cornered over 40% of the market. By “Quidsi”-ing Zappos, Amazon stands to lose a chunk of that 15% to competitors. Unless Zappos is no longer profitable or loses all the brand equity it has, then there’s no reason to throw away revenue. There’s a variety of paths that they can choose to do with Zappos, but closing it would be a mistake.

Braintrust
"I don't see a net positive by folding the Zappos business into Amazon, considering the brand loyalty it built (and continues to enjoy)."