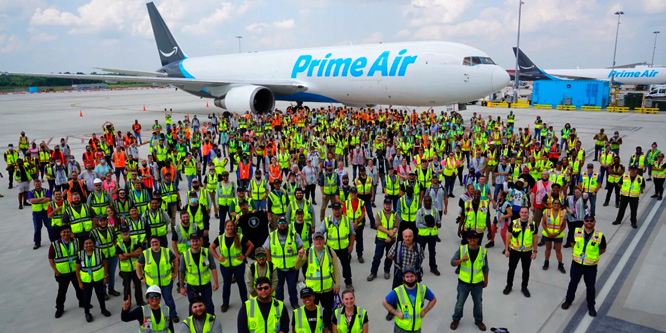 Amazon.com plans to hire Hawaiian Airlines to fly packages on 10 leased Airbus SE jets around the U.S. while taking a stake in the carrier.

In a blog entry, Sarah Rhoads, VP of Amazon Global Air, noted that Amazon introduced its first aircraft in 2016 to help guarantee one or two-day delivery to Prime members.

Over the past two years amid the supply chain crisis, Amazon took on additional leased aircraft. Its fleet now numbers more than 110. The company also launched new air hubs, including at the Cincinnati/Northern Kentucky International and Germany’s Leipzig/Halle Airport.

Said Ms. Rhoads, “It was meaningful to reach so many more customers in different parts of the world during a time when many were relying on us to get them what they needed while they lived and worked from home. Now, when I look at our network, I know that we have the structure we need to be nimble when the expected and unexpected, like Hurricane Fiona and Hurricane Ian, occur.”

Air freight prices have recently been slumping as port congestion has eased and the global economy has weakened.

The 10 Airbus A330-300s, replacing older Boeing 767s, are being converted from cargo planes, and additional planes may be leased. Said Ms. Rhoads, “These A330s will not only be the first of their kind in our fleet, but they’ll also be the newest, largest aircraft for Amazon Air, allowing us to deliver more customer packages with each flight.”

Amazon acquired warrants to purchase up to a 15 percent stake in Hawaiian Airlines, similar to arrangements with other air cargo providers, Air Transport Services Group and Atlas Worldwide Holdings.

Air freight has traditionally been a small part of the overall cargo market, but demand for cargo planes and cargo space on passenger planes is expected to remain elevated versus pre-pandemic levels due largely to growth in e-commerce.

Rob Morris, global head of consultancy at Ascend by Cirium, an aviation data firm, recently told CNBC, “If you look at the e-commerce segment of air cargo, that has grown significantly and that’s probably not going to cycle back because we’ve all learned to acquire things in a different way.”

DISCUSSION QUESTIONS: How much of an edge does Amazon gain from its airplane and air hub investments? Will air freight play a larger role supporting retail’s supply chain in the years ahead?

Please practice The RetailWire Golden Rule when submitting your comments.
Braintrust
"This is a smart move for Amazon – anything that reduces reliance on third-parties in the supply chain can only help."

"You may have noticed that for Prime users, shipping costs didn’t really blow up recently as they did with the aforementioned specialists."

"This is another tactic that aligns with Amazon’s strategy to take control of its supply chain to accelerate delivery and control costs."

12 Comments on "Will Amazon’s air cargo investments take off?"

There is a marked advantage to increasing Amazon’s own freight capacity to meet one- and two-day delivery demand. Amazon will strike a balance between filling its dedicated aircraft and resorting to commercial airlines to handle airfreight. This does not mean that Amazon should operate its own airfreight fleet a la FedEx. That is a different business.

Amazon decided a long time ago that relying on the whims of FedEx and UPS was NOT the way to go, hence the trucks, planes, outsourcing, drones, deals with USPS, etc. You may have noticed that for Prime users, shipping costs didn’t really blow up recently as they did with the aforementioned specialists. Prime Air won’t only take off, I believe they’ll put one of the major shippers into some dire straits within the next couple of years. As a wise man once said, “the rich get richer all the time,” and that’s certainly the case here with the $600 billion behemoth.

I love this. It is the perfect example of a “domino strategy.” Like AWS, with was originally developed to support their online business and morphed into a business that brought in many other customers. My prediction is that Amazon Air will do the same. They invest and build through their own business, then incrementally develop outside customers. USPS would be a great fit.

The more urgency becomes an advantage for supply chains, the greater air freight will meet a need. The big hurdle in air freight is cost. But as technology advances in systems, sizes, and planes, costs will continue to drop.

More and more, Amazon is walking and talking like a data and logistics company. Retail is a means to an end. Fascinating to think what that end will look like in five to 10 years.

This is another tactic that aligns with Amazon’s strategy to take control of its supply chain to accelerate delivery and control costs. As customers’ expectations for delivery speed continue to increase, air freight will continue to be an integral part of supply chain fulfillment.

This is a smart move for Amazon – anything that reduces reliance on third-parties in the supply chain can only help. The challenge will be to avoid trying to become a full-fledged carrier and compete with UPS, etc.

For years Amazon has been trying to control the entire customer experience, which includes shipping. They have made great strides with their goal of not having to rely on third-party carriers, such as FedEx, UPS, USPS, etc., this just gets them closer to the finish line. The numbers obviously work for Amazon – owning the fleet versus relying on others.

This is another strategic move by Amazon in its bid to become more efficient, provide better service and be better prepared for any kind of disruption that comes its way. Watch for more deals like this with struggling airlines who’ve bought more aircraft than they can use.

Amazon is singularly focused on controlling every aspect of the e-commerce experience, so it is not surprising, given their vast resources, for them to further invest in supply chains. I’m also wondering when they will get into the branded travel business.

Amazon contracts with at least four different air cargo providers (including Sun Country) and almost 100 aircraft. Bringing Amazon Air in-house means a deeper step into the air cargo delivery business of UPS and DHL and to a lesser extent FedEx. Amazon already has air hubs in Europe and this expansion to verticalize their air assets is a major step towards becoming a stronger delivery company worldwide. This is not only about air support for retail delivery, but about which markets are large enough for Amazon to grow. Cargo and Healthcare have been primary targets.

Amazon Air is a brilliant strategic move, and very customer-centric as an end-to-end solution toward logistical third-party supply chain handcuffs and hold ups. They can control much more of their own destiny now. And in making this move, they’ve raised the bar of excellence anytime a customer thinks about, compares delivery by Amazon versus competitors.

Amazon’s latest investments in the air hub will undoubtedly have a positive impact on its business operations. However, the “extra-mile” effort that Amazon is trying to make does not revolve around customers’ pressing needs. Amazon can promote localization and yet guarantee one-day and two-day delivery rather than relying solely on making products available from all around the world. I believe, a little more focus on local products won’t do any harm.

Braintrust
"This is a smart move for Amazon – anything that reduces reliance on third-parties in the supply chain can only help."

"You may have noticed that for Prime users, shipping costs didn’t really blow up recently as they did with the aforementioned specialists."

"This is another tactic that aligns with Amazon’s strategy to take control of its supply chain to accelerate delivery and control costs."