Will an online deal with Fanatics prove to be a big win for Kohl’s? 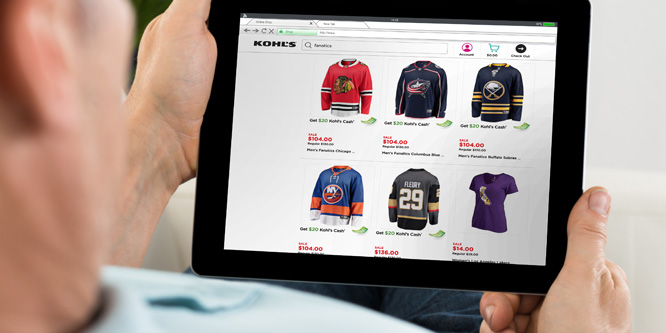 Kohl’s announced that it has signed an exclusive long-term deal to sell Fanatics’ licensed sports merchandise on Kohls.com.

Beginning in the fall, Kohl’s will have “hundreds of thousands of items” to choose from the Fanatics collection of team apparel, jerseys, etc. While Kohl’s has sold Fanatics merchandise in its stores, this new online deal represents a significant expansion in the business relationship between the two companies. Kohl’s will sell the merchandise on its site, with order fulfillment and shipping being handled directly by Fanatics. Kohl’s customers will be able to use the chain’s app to make purchases and earn Kohl’s Cash rewards.

In recent years, Kohl’s has made efforts to raise its health and wellness profile and to become a go-to source for athleticwear, sports-related clothing and fitness tech.

In January, Kohl’s announced a pilot collaboration with WW, the new Weight Watchers, including a studio inside one of its stores, the launch of WW Healthy Kitchen products and subsidized memberships for employees joining the WW Freestyle program.

In March, Kohl’s announced that it had reached a deal to lease space adjacent to 10 of its stores to Planet Fitness.

For Fanatics, the Kohl’s deal follows another announced with Walmart.com in January. That 10-year-deal gave Fanatics exclusive rights to sell sports-licensed apparel in its own “Fan Shop by Fanatics” marketplace on Walmart’s site.

Fanatics merchandise sold on Kohls.com will not have its own online shop.

DISCUSSION QUESTIONS: Will the online deal with Fanatics help make Kohls.com a destination for sports fans? Do you expect the launch on Kohls.com to affect sales made through the “Fan Shop by Fanatics” on Walmart.com?

Please practice The RetailWire Golden Rule when submitting your comments.
Braintrust
"Another move toward marketplace mania!"

"More merchandise for Kohl’s and broader reach (another channel) for Fanatics."

"Kohl’s has been successful by being selective in their choices and partnerships, like Fanatics, and that has been playing nicely into their overall growth strategy."

7 Comments on "Will an online deal with Fanatics prove to be a big win for Kohl’s?"

Another move toward marketplace mania! Retail’s favorite scale-building play is in full swing. Fanatics can quickly scale through platform partnerships with established players. Kohl’s diversifies by building out its online marketplace. Lather, rinse, repeat. The good news for both companies is that Kohl’s is relatively selective about its online marketplace partnerships rather than taking all comers. Kohl’s also isn’t treating its marketplace as a passive play – it’s dead serious about becoming a digital destination.

The decision to sell Fanatics products online is a good move for Kohl’s. Retailers today have an opportunity to test out products and concepts online first to see if the customer will respond positively and if so, then they can decide if they want to bring those products to their stores. I see Fanatics as one such possibility that after Kohl’s sees success, they may begin to place some product in-store.

Successful retailers know that they have to have a healthy balance between online and in-store and not to make what they offer online and in-store extremely different from one another because that frustrates customers. However, to provide some exclusive opportunities that are sold only online give retailers a chance to see what customers respond to and not before spending large amounts of money attempting to bring something in-store before it is proven.

I guess this is ok. Competitive marketplace. My question is are items different in offerings between these two giant retailers, or is this a shoot-out of sorts?

Adding additional apparel brands to Kohl’s assortment is not a bad thing for either of them! Maybe over time they can build their own “Fan Shop” and continue growing brands like Fanatics. Just keep adding these specialty brands and they will see increased revenue for both companies. Kohl’s has been successful by being selective in their choices and partnerships, like Fanatics, and that has been playing nicely into their overall growth strategy.

Kohl’s is not resting on its laurels, as they continue to diversify and try new concepts. Consumers looking for team apparel will appreciate the opportunity to earn Kohl’s reward points for their purchase. If Kohl’s loyalty members know the merchandise is available at Kohl’s it will definitely drive incremental sales for Kohl’s.

It would be interesting to see how Fanatics will handle its own “store” in the walmart.com marketplace going forward.

Braintrust
"Another move toward marketplace mania!"

"More merchandise for Kohl’s and broader reach (another channel) for Fanatics."

"Kohl’s has been successful by being selective in their choices and partnerships, like Fanatics, and that has been playing nicely into their overall growth strategy."