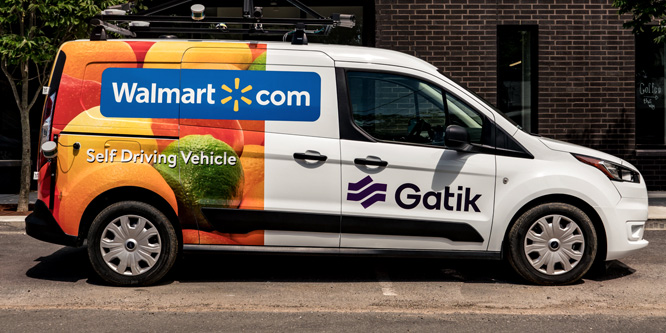 It’s pretty common to hear retailers talking about the need to own the last mile, with many taking a variety of approaches to effectively and efficiently handle the transfer of purchased goods to the customer. You can safely count Walmart among that group, but in an interesting twist, the retailer is taking part in a test of autonomous vans to transfer goods from one warehouse to another or to a store or other pickup point. The goal is to reduce costs in the so-called middle miles while moving packages to their ultimate destination.

The robo-vans being used by Walmart, according to Bloomberg’s reporting, follow fixed routes to reduce the risk of accidents and to keep operating in continual service. Human drivers are currently still behind the wheel on many of the test routes, so new processes for loading vehicles or navigation are not yet needed.

Walmart is working with Gatik, a two-year-old startup focused on short-haul logistics for business-to-business operations. Earlier this month, the company announced it had secured $4.5 million in funding and brought Walmart on as a customer.

At the time of the announcement, Tom Ward, Walmart’s senior vice president of digital operations, told VentureBeat, “We are a strong believer in autonomous vehicle technology, and we look forward to learning more about how Gatik’s innovation can benefit our customers in the coming months.”

This is not Walmart’s first venture into the use of autonomous vehicles. TechCrunch reports that the retailer signed a deal in January with Udelv to test deliveries to consumers’ homes using the tech firm’s Newton autonomous vans.

DISCUSSION QUESTIONS: How significant a challenge is the “middle mile” in retail logistics? Do you think that autonomous vehicles will be widely used to address this need in the near future?

Please practice The RetailWire Golden Rule when submitting your comments.
Braintrust
"Kudos to Walmart for investing and experimenting early, but it sure seems like they are far too early for autonomous vehicles to be a solution to the middle-mile problem."

"If any retailer will win any logistics race it will be Walmart. They have been doing this since day 1."

The middle mile is significant, and so it’s not surprising that Walmart is interested in experimenting early. While there’s no doubt that eventually autonomous vehicles will have a huge impact on the transportation industry as a whole, we’re still a long way off from autonomous vehicles being deployed in any meaingful way. The technology is still not ready, the legislation is not ready and, perhaps, society is still not yet ready.

Autonomous vehicles are part of the solution to many of the issues associated with both middle and last mile in retail. This is especially so as the nimbleness and flexibility needed in today’s supply chains has made middle miles more of an issue for many retailers. However, there are still major question marks (mostly regulatory) over the deployment and use of autonomous vehicles, so the technology isn’t going to provide a quick fix.

It’s margin warfare out there, so the middle mile is extremely significant. Autonomous vehicles will be used within the near future – they’re already being used. The real question is, when will autonomous vehicles and the businesses using them reach the point where they’re so much more cost-efficient that it outweighs the financial risk of having no human ride along?

It seems frequent that I see a news story about some retailer’s autonomous delivery system. It goes a long way to solving the delivery in suburban areas, particularly. It is The Jetsons coming true.

If any retailer will win any logistics race it will be Walmart. They have been doing this since day 1. Their success in logistics is because of the way they define their company. They see themselves as a “deliverer” of goods to the customer, not a “seller.” That slight difference in definition goes all the way back to Sam Walton and it is followed today. The slight difference in the definition makes a huge difference in how to approach the business.

There continues to be lots publicity about the use of autonomous vehicles handling delivery for one thing or another. At this point these are all really tests in hopes of being ready if, and when, the regulations catch up with the reality of these vehicles being on the road in any type of quantity. I expect this to be further down the road (no pun intended) than many.

Repeatable middle mile routes from warehouse to warehouse seem like a good starting point for autonomous vehicles, as there is less variability. The technology is getting much better and most auto manufacturers are investing in autonomous vehicles, including Audi, BMW, Daimler, Ford, GM, Honda, Hyundai, Jaguar Land Rover, Nissan, Tesla, Toyota, and Volkswagen. States are also beginning to pass legislation to all totally autonomous vehicle. This will happen, it just is an answer of when. According to physicist Michio Kaku, driverless cars will happen sooner than we think and accidents will be a thing of the past. We will see….

Considering that the cost of logistics as a whole, not just the middle mile, is a significant (almost 30%) of the cost of goods sold, it is not surprising that the Walmarts of the world are experimenting with innovative methods to reduce cost per mile (or cost per kg shipped). If we read this along with an another article on RetailWire — Kroger’s 30-min delivery promise — we can see where retailers are headed. If the route is charted and the truck is completely driven by AI, then it becomes possible to predict time of delivery accurate to a few minutes. I see delivery promises, like the one from Kroger, being made on back of driverless logistics.

Braintrust
"Kudos to Walmart for investing and experimenting early, but it sure seems like they are far too early for autonomous vehicles to be a solution to the middle-mile problem."

"If any retailer will win any logistics race it will be Walmart. They have been doing this since day 1."