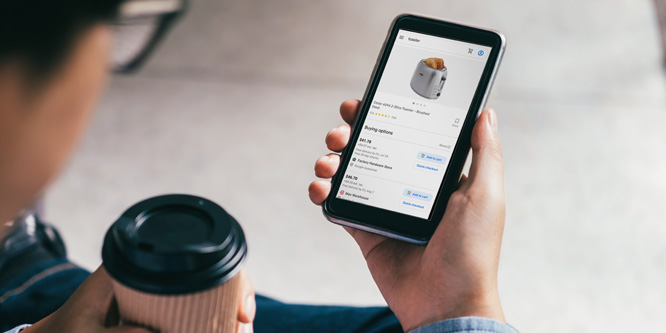 Google last week announced it was eliminating commission fees for sellers for purchases made directly through Google Shopping. It is also opening its selling platform to third-party selling tools.

Currently, commissions on Google Shopping range from five to 15 percent, depending on the items. Offering the service for free should help Google build out a substantial product catalog. According to Marketplace Pulse, Google Shopping had about 3,700 stores and other merchants at the end of 2019 versus three million active sellers on Amazon.com.

The change comes amid rising complaints from some small businesses that Amazon is squeezing them for more fees. Google’s president of commerce Bill Ready said in a blog post, “By removing our commission fees, we’re lowering the cost of doing business and making it even easier for retailers of all sizes to sell directly on Google.”

In May, Google began allowing merchants to list products on Google Shopping for free.

To ease the onboarding process, sellers can now use their preferred services for activities such as inventory, order management and payment processing. Shopify and PayPal are the first two added. Sellers that had an inventory of products listed on Amazon will also now be able to move them over to Google without having to reformat the data.

Finally, the company is adding a small business filter to the Google Shopping tab and promises more features supporting small and midsize businesses.

The move is being seen as a means to drive advertising revenues, an area in which Amazon has grown significantly in recent years.

Google is the second-most popular place to search for products online, but more than twice as many consumers start their search on Amazon. Product searchers heading to Amazon also have more of an intent to purchase than those heading to Google.

Adding more products to create a more relevant shopping experience for consumers will allow Google to charge advertisers more for better placement in organic search results. Mr. Ready said, “With more products and stores available for discovery and the option to buy directly on Google or on a retailer’s site, shoppers will have more choice across the board.”

DISCUSSION QUESTIONS: Will waiving commission fees and easing onboarding help Google compete better with Amazon’s e-commerce marketplace? In what other ways may Google improve its positioning as an alternative to Amazon for sellers and consumers?

Please practice The RetailWire Golden Rule when submitting your comments.
Braintrust
"It is unlikely Google is willing to enter a spending war with Amazon only to be a distant number two, at best."

"The bottom line is Google Shopping is not and never has been ready for “prime” time shopping."

"Google’s failure isn’t due to commission fees ... rather, Google simply hasn’t shown that they can deliver sellers the economic power that Amazon does."

Amazon has a significant head start. Google with 3,700 stores is a very minor players – and those stores are also on Amazon. Google is waking up to the reality that their product portfolio is reaching the limits of growth. Search has been getting chipped away at with people directly going to Amazon or shopping through Instagram or Facebook.

Google has to do a lot more than eliminating commissions. It doesn’t seem to have cohesive strategy to provide great user experience. It is very disjointed. That is why the uptake is so slow, and customers don’t use it as much.

This will encourage third-party sellers to add Google to their mix perhaps, but they won’t leave Amazon. Leaving Amazon because they “cost too much to do business with” is the e-commerce equivalent of pulling out of Walmart because they squeeze too hard on net price. Very few do it, and even fewer are happy if they did.

I highly doubt this is going to move the needle much for Google Shopping. If anything, an Amazon marketplace seller would add Google Shopping as just another place to sell their goods.

With that being said, I actually have used Google Shopping and was extremely impressed with the ease of the transaction and speed of delivery even compared to Amazon. I bought something from Target via Google Shopping – the transaction was seamless on Google and I received the merchandise in 12 hours (living in a rural area). So between Google and Walmart, Amazon cannot get complacent with their service offerings.

This is a smart move by Google. Competition is how businesses thrive and survive because it forces them to make the right decisions to keep themselves one step ahead. Amazon has been enormously successful for many years and is way ahead of any competition. Perhaps Google has a shot at competing with Amazon but, if anything, COVID-19 has only helped Amazon jump even further ahead. The good news is that Amazon has been greedy with its third-party sellers, so now with Google eliminating commission many Amazon third-party sellers may jump ship, which will help Google. Also Google needs to find methods that will attract more customers and incentives for them to shop. I believe they will and, in the short term, we’re liable to see some big competitive wars between Google and Amazon.

Google has a fundamental problem. While consumers associate Amazon with shopping and Prime, Google is the keeper of information on the internet; it is synonymous with search engine, as in “did you google it?” Waving fees reduces friction for those merchants already on or considering using Google Shopping. The move is less likely to make an impact on the margin – to draw new merchants.

On the demand side of the equation, Google Shopping does not have high consumer awareness and the pre-existing mainstream alternatives have the consumers’ mindshare. Google has come to be equated with technology and the dominant search engine of the information side of the internet. Amazon is the shopper’s search engine AND the most frictionless shopping execution engine and platform. With highly significant investment, Google Shopping can capture share of mind and wallet, but it is unlikely Google is willing to enter a spending war with Amazon only to be a distant number two, at best.

So true. Awareness is a big challenge. There is probably a place for another marketplace, but Google is not positioned as such. They are positioning Google Shopping as a gateway, whereas customers look for guarantees, customer service and recourse. In that sense, Google isn’t even playing in the same area as Amazon or Walmart Marketplace.

I just tried to place an order using Google Shopping. To begin with, there is no separate website or portal. The recommendations based on my search and browsing history are good – This could be a point of differentiation, although the UI is highly cluttered. The checkout experience is as expected, but it is not clear what Google’s responsibility if any is if the order doesn’t ship as expected or if one has returns or any customer service issues. That is the gap they need to fix.

This is akin to a “loss leader” opportunity. Eliminating commissions is the way to get retailers to come on board. It is only a matter of time before those come back. And that’s okay. In the meantime, this is a way for Google to build out this opportunity. Amazon has a head start — a HUGE head start. I don’t know how much impact this will have on Amazon short term, but over time retailers and, more importantly, customers, will learn about an Amazon alternative. Let’s see if competition helps the marketplace.

Remember how Google+ was going to replace Facebook and/or Twitter? People are creatures of habit, and digital shopping habits are no exception. Will waving fees get Google more business? Yes. Will disaffected Amazon vendors move to Google? Sure. Will that — at least for the foreseeable future — be a threat to Amazon? Not hardly. Amazon just has significant prime mover advantage and, unless they make a huge misstep, (which is always possible) Google won’t catch them — at least any time soon.

The end result of having visited Google Shopping this morning is — good luck Google! Upon entering Google Shopping, one is greeted by a plethora of products based on personal Google searches, which is ridiculous. Many Google-inferred product recommendations on the home page are silly, and at the same time they border on creepy. Some product recommendations appeared to be based on in-home conversations, not Google searches. Diving deeper into Google Shopping exposes Google has little to no clue about the business of retail. And more importantly how to compete with Amazon. There is no way to understand the delivery timeline nor return process under the Google Shopping umbrella. To make matters worse, for example, checking the Nordstrom box to shop Nordstrom yields no product or Google paid ads by Stitch Fix, Old Navy, and Lulus.com. From a vendor perspective, “free” listings on Google Shopping are anything but free in terms of the time it will take vendors and brands to manage their individual customer’s shopping experience on the Google platform. The bottom line is… Read more »
3
|
0
-   Share

Google’s failure isn’t due to commission fees — so this is unlikely to have much impact. Rather, Google simply hasn’t shown that they can deliver sellers the economic power that Amazon does.

It’s too bad. Sellers desperately need a strong alternative to Amazon for online sales — today’s dominance leaves them at Amazon’s mercy for increased fees, competition from big brands as they intrude in Amazon deals, rejection of their goods, and Amazon choosing to compete with them.

This isn’t going to result in any significant opportunities for retailers. Google’s attempt at a marketplace with Google Express was a failure and this “good will” gesture isn’t going to make any of us go back and try it again. Amazon has the majority of consumers locked in with Prime. Right now, Google doesn’t have anything to compete with that.

Braintrust
"It is unlikely Google is willing to enter a spending war with Amazon only to be a distant number two, at best."

"The bottom line is Google Shopping is not and never has been ready for “prime” time shopping."

"Google’s failure isn’t due to commission fees ... rather, Google simply hasn’t shown that they can deliver sellers the economic power that Amazon does."