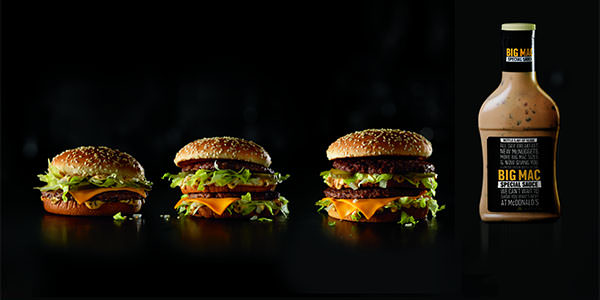 McDonald’s decision to serve breakfast all day long helped boost the fast-food chain’s sales for a short time. Recent sales evidence, however, suggests the allure of being able to get a McMuffin or McGriddles sandwich anytime they want may be waning. So, what does McDonald’s plan to do next to move its business in the right direction? Offer more Big Mac choices, of course.

The chain is offering two additional sizes of its popular burger for a limited time. These include the Mac Jr., a single-patty version of the Big Mac, and the Grand Mac, which has a bigger patty than the flagship sandwich as well as an extra slice of cheese. To celebrate the Big Mac, McDonald’s is also giving away 10,000 limited edition bottles of its Special Sauce at participating restaurants across the U.S. beginning tomorrow.

McDonald’s promotion of its Big Mac appears to be yet another attempt for the chain to connect with Millennials. According to an internal memo, reported on by MarketWatch, only one in five Millennials has eaten a Big Mac. The chain tested a Sriracha Big Mac in 126 restaurants in Ohio in the fourth quarter to determine if it would roll out the item nationwide this year.

McDonald’s same-store sales in the fourth quarter declined 1.3 percent in the U.S. The chain said the drop was due to an unfavorable comparison to sales from a year earlier when it launched its all-day breakfast menu.

In November, the chain announced plans to roll out table service to all of its 14,000 locations in the U.S. With the new set-up, customers use a touch-screen to place their orders and pick up a location device for servers to deliver food to their tables. McDonald’s believes the new system will improve the customer experience by cutting down on wait times at the counter.

On the company’s earnings call earlier this week, CEO Steve Easterbrook, said McDonald’s was in the “very, very early stages” of a small pilot program in Florida to determine if home delivery makes sense for the chain.

DISCUSSION QUESTIONS: Will McDonald’s new Big Mac promotion help the chain attract more Millennials to its restaurants? What do you see as the fundamental challenges facing McDonald’s as its seeks to cultivate new generations of customers?

Please practice The RetailWire Golden Rule when submitting your comments.
Braintrust
"I’ve said it before and I’ll say it again: Fix the burgers! "

"The size of the Big Mac isn’t the cause of McDonald’s issue with Millennials. Younger people have grown up with a plethora of choices..."

"Three sizes of Big Macs is as temporary an attraction as the all-day breakfasts. They need to find a draw..."

The problem Millennials have with McDonald’s goes deeper than never having tried a Big Mac. The restaurant chain does not fit their lifestyle, from the menu to the store design. They may have been raised on Happy Meals, but Millennials’ tastes have changed.

The size of the Big Mac isn’t the cause of McDonald’s issue with Millennials. Younger people have grown up with a plethora of choices and they’re willing to pay a premium for the freshest and most sophisticated ingredients. Once they’ve eaten at Shake Shack or Five Guys, it’s tough to see the big guy on the block as a preferable alternative.

I’ve said it before and I’ll say it again: Fix the burgers! It’s not that Millennials (or Boomers, or anybody else) won’t eat fast-food burgers, but they have a lot of choices where the food is better, from Five Guys to regional chains like Culver’s or In-n-Out Burger.

I ate last week at a new McDonald’s in Grafton, Wisconsin where the kiosk-ordering system was installed. My wife and I were able to customize our lunch sandwiches (chicken for her, burger for me) but we found the kiosk technology confusing and the wait time far too long compared to a typical Culver’s that also brings your order to your table. But, worst of all, the burger was the usual piece of dry, flavorless once-frozen beef that had clearly been sitting in McDonald’s notorious warming drawers for too long.

Until McDonald’s figures this out, no amount of customization or new technology matters.

As brands try to get it right they can easily cross this line into being “lame.” McDonald’s can stay well within the lines and enjoy the benefits of a Hawthorne Effect with limited costs versus benefits. The insights gained through this initiative can fuel refinement of the product offerings. Trial and innovation are the foundation of “new,” and isn’t “new” still one of the most powerful words in marketing?

McDonald’s problems go deeper than how to draw Millennials to the stores. They cover the wide swath of most of the generations. Three sizes of Big Macs is as temporary an attraction as the all-day breakfasts. They need to find a draw — a reason customers will want to come to McDonald’s.

They are not alone. The other big-name fast food restaurant chains have to be struggling with the same problem.

If they can do a Mac Jr. on the dollar menu it will be successful. I got a text offering a free fries and a drink with a Grand Mac. Not for me. I like a Big Mac but a Grand Mac would be a bit much to eat. In my opinion they need to keep it simple. They have so many options they can’t put them on the overhead menu, so the sign has to keep changing. Like someone said — fix the burgers. I thought their breakfast was their worst menu so having it all day sounded horrible to me. I’d rather have a cheeseburger for breakfast. Get rid of all those silly coffee and smoothie drinks. Those teenagers who make them have no clue what they are doing and they take forever to prepare. Just pour me a $1 coffee. Keep in mind, McDonald’s is not for the Chik-fil-A or Starbucks crowd. They cater to low-income diners.

“Insanity: adding more of the same burgers (that aren’t selling) and expecting growth.”

Well, perhaps not insanity, but certainly ineffectual. Table service … home delivery … what’s next, after hours lingerie shows? I wish them well, but each idea seems more desperate than the last.

This is exactly the strategy that McDonald’s should be pursuing — the introduction of a new variation, flavor and combination. They need to use “special” foods that are available as part of their regular, non-stop promotional calendar. Then they need to find the ones (the McRib, for example) that are popular and make those annual special events. McDonald’s can’t compete with the premium hamburger outlets because of its size, locations, pricing and tradition so it needs to make the most of what it has. How about seasoned fries? Sriracha fries? Hot pepper cheese burgers? Filet o’ Fish and Chips? … Maybe even a Filet o’ Fish with real fish.

Braintrust
"I’ve said it before and I’ll say it again: Fix the burgers! "

"The size of the Big Mac isn’t the cause of McDonald’s issue with Millennials. Younger people have grown up with a plethora of choices..."

"Three sizes of Big Macs is as temporary an attraction as the all-day breakfasts. They need to find a draw..."