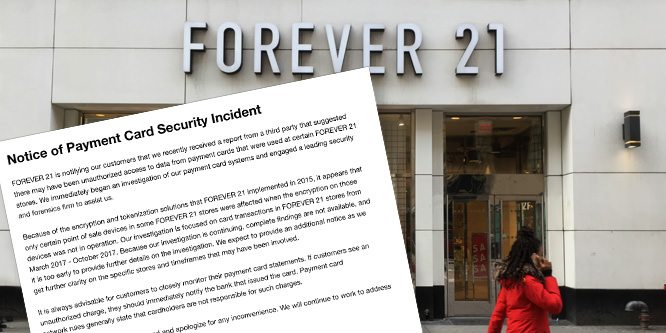 It’s said that retail is detail. If that’s the case, many of Forever 21’s customers may find the chain’s terse announcement concerning a potential breach of its point of sale systems less than satisfying.

The chain announced yesterday that hackers may have gained access to payment systems, potentially putting customers’ credit card information at risk. The intrusion, it said, appears limited to “only certain point of sale devices” in “certain” stores.

Forever 21, which said the breach occurred from March to last month, was notified of a potential problem by a third party. The hackers, it appears, were able to gain access through point of sale systems that were not encrypted. Forever 21 has hired an investigative firm to get to the bottom of the issue.

The chain suggested customers monitor their statements to see if any unauthorized charges were made to their cards. It advised customers to immediately notify their banks if any such charges appeared, while also informing them that they would not be liable for illegal purchases.

“We regret that this incident occurred and apologize for any inconvenience,” the chain said in its statement. “We will continue to work to address this matter.” Customers seeking more information were directed to visit www.forever21.com/protecting_our_customers.

The hack at Forever 21, according to a Wall Street Journal report, is another in a line of breaches that have recently affected a wide variety of businesses, including Equifax, Sonic and Whole Foods.

DISCUSSION QUESTIONS: Will Forever 21’s data breach news negatively affect its business or have consumers tuned out such notices from retailers? Do any elements of the Forever 21 announcement give you pause as someone who works in the industry?

Please practice The RetailWire Golden Rule when submitting your comments.
Braintrust
"We have to look at these breaches in context. Data security is a huge issue for all businesses."

"That fact that the breach has been ongoing since March, and was discovered by a third party, will affect consumer confidence..."

Data breaches are a sad reality in business today — not just retail. In the short term, some consumers may stay away from Forever 21, but memories are short and over time these concerns will likely dissipate for Forever 21 customers. Of course data security is a key concern and vigilance/decisive action is critical to maintain consumer confidence, however, when you consider that some of the most secure companies and organizations (including the government) get hacked, we have to look at these breaches in context. Data security is a huge issue for all businesses.

I think most consumers are pretty immune now to breaches. Target paved the way and Equifax drove the nail home. How the company deals with it is what makes or breaks it. No one remembers Home Depot getting breached nearly to the extent that they do Target. Two totally different PR strategies that led to different outcomes. I personally don’t even care about the breaches, as a consumer they don’t affect me, the credit card companies credit you back for unauthorized transactions and the merchant is on the hook. My only gripe is having to update auto-pays that used that card number.

The announcement could not have come at a worse time on the retail calendar, and will give consumers pause about shopping at Forever 21 this holiday season. That fact that the breach has been ongoing since March, and was discovered by a third party, will affect consumer confidence in the chain. Consumers expect merchants to provide secure transactions. Forever 21 failed that test.

This shouldn’t be too much of a problem with their young buyer demographic and the unique style they offer.

Unfortunately, I don’t think retailers and other companies have a solution to these data breaches as many of these hacks come from third-party vendors/plugins. If they remove the plugins/vendors then the user experience suffers or they need to design new technology in-house which they don’t have the budget or resources for.

Unfortunately, some customers may choose not to shop Forever 21 after hearing the news, but I don’t see them losing a significant amount of business. First, the problem has happened, and it is too late to undo what has happened. The company has been above board communicating with customers about the incident and what they are doing about it. And second, because Forever 21 is aware and monitoring everything carefully, it is unlikely it will happen again.

The public today continues to hear about many breaches. As a result, they are becoming more accustomed to them. It doesn’t mean they are happy about it, but these constant breaches are making consumers more aware that each of us has to do whatever we can to protect ourselves by using strong passwords, changing them often and signing up with a fraud protection agency. Hackers are out there, and they are not going away anytime soon.

This will likely have some impact, but I don’t think it will be dramatic. There have been so many data breaches and issues over recent years that consumers now almost take them for granted.

It’s probably the worst time for this data breach to happen to such a big retailer like Forever 21, given the upcoming holiday season. However, I don’t think it will deeply affect the company’s future sales, especially since the data breach has already been discovered. It will probably be just a matter of days before the situation is completely resolved. Consumers know that all companies’ systems are at risk in our ever-evolving society, with hackers gaining access to many systems (not only in retail). I can’t say I’m concerned about Forever 21’s sales this Christmas.

Yes, it will affect them. Some customers will say Forever 21 has betrayed their trust, they did not take effective action to protect their personal details and as such they will not return. As for their message to customers, I don’t get any sense of urgency from Forever 21, or acceptance of the scale of the matter for customers.

I note that Senator David Carlucci and Assembly member Brian Kavanagh have sponsored “The Stop Hacks and Improve Electronic Data Security Act” (SHIELD Act) in New York. This is moving up in the political agenda and for retailers and all businesses, my advice is to prepare for it. A clear step would be to strive for the international standard ISO 27001 and ensure your suppliers are also at this level to avoid exposure. Nobody is immune from cyber theft!

It’s way too early for customers to tune out such notices; in fact this problem only seems to be becoming more frequent, and of concern, across the board. It’s still early in customer awareness that their data may be in (serious) jeopardy. It should affect holiday shopping because 1) it’s current news; 2) it’s negative; and 3) The company seems somewhat without a clue that this problem existed for several months without their knowledge?!

I think the news of breaches has to an extent immunized consumers to the news. Yes in the short term the company will be put in bad light, but the reality is that shopping will go on if the merchandising and shopping experience is compelling. Their shopping base is very digital savvy and monitors personal data pretty closely. As long as they are up front and offer support to customers who have been breached, they will be fine.

Braintrust
"We have to look at these breaches in context. Data security is a huge issue for all businesses."

"That fact that the breach has been ongoing since March, and was discovered by a third party, will affect consumer confidence..."