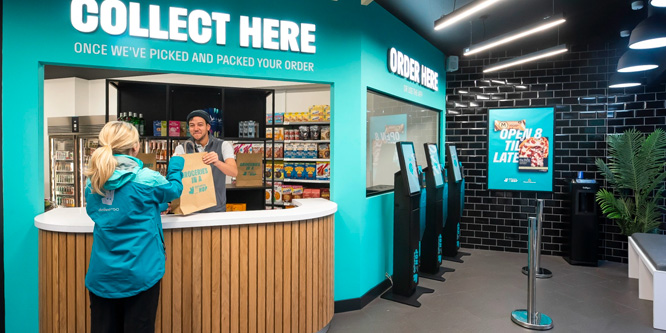 Deliveroo Hop is a new kind of dark store where people can shop for groceries on premises, sort of.

The quick commerce startup, which relies on “dark store” mini warehouses to fulfill orders, has launched a new concept in Central London where non-app users can enter the location, order from a digital kiosk in a reception area and pay via card, according to TechCrunch. After placing a kiosk order, the customer waits a few minutes and is handed their groceries by an employee from behind the counter.

The facility still operates as a dark store for delivery fulfillment and the micro-warehouse portion is closed off to customers. The store location also functions as a pick-up point for app users.

As the pandemic drastically increased the demand for fast delivery, ultra-fast delivery startups reliant on dark stores for fulfillment began proliferating in the U.S. and around the world.

However by early 2022, cities worldwide began recognizing that ultra-fast delivery services were causing problems. Municipalities in both Europe and the U.S. began taking action to constrain how dark stores operate.

In February, Rotterdam in The Netherlands put a one-year freeze on the opening of any new dark stores due to complaints. Critics identified them as an eyesore for residential areas and a nuisance because of noise and traffic disruptions. Amsterdam, Lyon, France and Paris all began instituting ordinances around the same time to reel in dark stores.

In May, New York City began cracking down on dark stores for violating zoning laws, according to the New York Post. Since dark stores do not allow customers to shop, the city deemed them warehouses, which cannot be placed in residential neighborhoods. The city did allow stores to operate if customers can enter the location and place an order, provided they do not have to use an app.

Last month, France declared that dark stores were legally considered warehouses, according to the BBC. This clarification will give mayors of French cities the leverage to close ultra-fast delivery services, should they see fit, calling into question the model’s future in France. In September there were about 80 dark stores in Paris.

DISCUSSION QUESTIONS: Do you consider the Deliveroo Hop concept to be an improvement on the dark store model? What advantages or disadvantages might it have for retailers and delivery services currently operating dark stores for fulfillment?

Please practice The RetailWire Golden Rule when submitting your comments.
Braintrust
"Convenience stores in the U.S. could learn a lot from Deliveroo. "

"Does this not make the Deliveroo Hop just another store?"

9 Comments on "Will Deliveroo’s new, not-so-dark store change how ultra-fast delivery is done?"

The vast majority of rapid delivery companies are unprofitable and for quite a few the unit economics do not stack up. This means they need to find ways of generating incremental revenue to bolster the profit line. Allowing dark stores to also operate as shops where people can walk in and buy this is one such solution. It is unclear how much additional revenue a concept like Deliveroo’s will generate, but the idea behind it is sensible. Of course, many traditional grocers already use this approach: their existing stores – which are by and large profitable – are used as the hub for picking and packing online orders, something which improves their margins.

This seems like an evolution of the BOPIS model and I’m curious what the benefits are to this model other than keeping the warehouse/store more organized and orders processing faster. It may also isolate the customer that enjoys selecting their produce. Although it’s efficient, I’m not sure it’s a fully customer-centric concept.

Convenience stores in the U.S. could learn a lot from Deliveroo. The mini-warehouse + showroom model places fulfillment centers deeper within communities to reduce the cost of rapid delivery, but leverages that real estate to allow in-store buying. Loyalty members and newbies alike have the ability to make purchases. And Deliveroo has reduced their risk of theft by having employees pick and pack orders for the customers. And while this does keep staffing costs up, it potentially offers a better customer experience to the shopper than Amazon’s Just Walk Out tech.

Adding kiosk ordering at the dark store does provide an option for shoppers that don’t or won’t use mobile apps, however the value of this option seems questionable. It seems like it would be much more efficient for customers to pick their own items in the store and check out (self-checkout or cashier lane), than to enter and order in a kiosk and wait for someone to pick their items.

Deliveroo Hop’s concept is more welcoming than dark stores focused solely on logistics. Allowing shoppers inside gives Deliveroo a municipal zoning advantage. Dark stores must be located near homes to ensure fast delivery, so zoning laws can make or break these business models.

I think there are more ultra-fast business models out there than customers needing ultra-fast delivery.

Does this not make the Deliveroo Hop just another store? If I have to go to the Hop, place an order and wait for my goods I may as well go to a shop where at least I can choose the products for myself. I do not see this as a major way forward. If dark store development in residential areas is also restricted this will not get off the ground.

Seems like a great way to utilize consumer-convenient space in more than one way to serve a variety of shopping and delivery needs.

Deliveroo Hop will be able to serve customers both in-store and online by using dark stores as a pick-up site and a mini-fulfillment facility. However, it could become a nuisance if these dark stores are located in residential neighborhoods. Is it ethically correct to adopt such a business model, then? In my opinion, no.

Braintrust
"Convenience stores in the U.S. could learn a lot from Deliveroo. "

"Does this not make the Deliveroo Hop just another store?"